In an interview with Brocar Press, Nasr al-Hariri discussed the formation of the constitutional committee, the situation in northern Syria and the road to presidential elections. 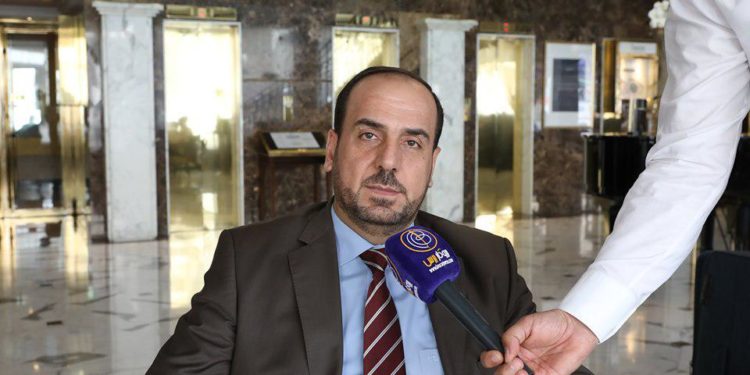 Nasr al-Hariri told Brocar Press that both America and France are trying skip over the constitutional committee and go directly to presidential elections in Syria. The President of the Syrian High Negotiations Committee stressed in this special interview the importance of implementing Resolution 2254 to preserve Syria’s unity. He also noted that there were good relations between Syrians and Turkey. Here is the full interview:

Brocar Press: What are the most prominent issues in the meetings of the Small Group around Syria?

Nasr al-Hariri: The main issues in these meetings are: northern Syria, whether that is northwestern Syria and the military escalation being carried out by Iran and the regime and Russia and the need to reach a comprehensive ceasefire in this area, or northeastern Syria and the Turkish-American understandings and the safe zone; and reviving the political process, based on a constitutional committee, which has gone on for a long time and there are still continuous discussions around its procedural bases, and empowering the committee, through Turkish-Russian efforts in Astana or the United Nations or the Small Group, to finish the matter of forming the committee. The issue that is not absent in any meetings, is trust-building measures, led by the issue of prisoners, which the regime still doesn’t want to get into.

BP: How were the six names for the constitutional committee chosen?

NH: It was agreed that there would be six names in our part of the third, and that those chosen would meet the United Nations’ standards of neutrality, credibility, inclusiveness and balance. Any name that did not meet these conditions would be disqualified. We have not and will not accept any name that does not meet the UN standards.

BP: But there are parties who are calling the committee to be bypassed—France and the United States, for instance…

NH: There is a difference between what France is doing and what America has proposed. France has developed a “non-paper” and how the operation can enjoy the trust of the Syrian street and conform with international standards. But in general things are still at the beginning. A meeting will be held between the Negotiations Committee and the French Foreign Ministry to discuss the “non-paper” and the details of the election committee.

We are trying, and we have shown as much cooperation as possible to form the constitutional committee, as a part of implementing Resolution 2254. But the regime and its allies are still obstructing the formation of this committee as a beginning and a key step in the transitional political process in Syria.

Many parties, including the United States, do not accept—rightly—that discussion about the constitutional committee continues forever or in an open fashion. And so it [the United States] has moved toward the idea of, “Let’s not discuss the constitutional committee and move directly to elections.” They proposed this in the general framework. But Resolution 2254 is very clear, that there be credible, non-sectarian governance, which requires a new constitution, and then preparations for presidential and parliamentary elections based on that.

Currently any jump to elections in light of the current regime and in light of the lack of achievement of a new draft constitution for the country will be an unsuccessful and an unacceptable step. No Syrians will take part in these elections and they will not achieve the standards of 2254 for credible, transparent elections under UN supervision, unless the first basket issue [transitional governance] and the second basket [draft constitution] are achieved.

And so the failure to form the constitutional committee doesn’t mean going towards other choices that would be destined to fail from the start.

BP: What about Resolution 2254 and the fourth basket arrangements from the former international envoy to Syria, Staffan de Mister?

NH: Of course, Resolution 2254 has a logical path for implementation (transitional governance, the constitution, elections). The French and the Americans have not proposed anything outside of Resolution 2254, and they have tried to develop ideas to get started. But I don’t think that going to elections is a good choice—and on the contrary, if the committee fails to be formed, we propose going back to discussing the material matter, which is the formation of the fully-empowered transitional governing body, under which it will be easy to settle a new constitutional for the country. If the process is run contrary to this, then matters will become very complicated.

BP: Is there any intention to hold Riyadh 3?

NH: This is not on the table at all, and it has not been agreed between the Committee and any other international or UN body. The negotiating body has a clear negotiations task and I don’t see any need to hold a new conference, because there are no problems inside the opposition. The problem is in the regime and its backers.

BP: There is a major division between Washington and Ankara around the “safe zone” and Syrians have no clarity about this zone and it’s aims. How could it affect the situation in Syria?

NH: Dealing with northeast Syria represents a dilemma. These are areas where there was a fight against terrorism. Then another group came (the Kurdistan Workers’ Party) and took control over this area. This dilemma is being discussed by a number of Syrian and regional parties, including Turkey and America, and what is being discussed now are the security and military arrangements in this area. We have exchanged and shared viewpoints with a number of international parties, beginning with the preservation of Syria’s unity and taking into account all Syrian voices and communities, and taking into account Turkish concerns and preventing the re-emergence of the Islamic State, as well as preventing Iran and the regime from entering this area and returning all refugees and removing all foreign fighters who have entered there.

Parties are also trying to negotiate with the regime to facilitate its entry into this area because the regime and its allies are still inclined toward a military solution. It is not fair to say that the PKK is the legitimate representative for Kurds or Syrians there, nor the PYD.

BP: How do you evaluate the Turkish role in northern Syria

NH: Turkey is a neighboring country and an ally to the Syrian people. It was and still is in the Friends of Syria group. While we see countries that have gone back on their positions, we see that Turkey is still concerned with what is happening in northern Syria. Turkey has its own problems, calculations, concerns and interests, but we don’t differ on Syrian priorities.

Now, recently there has been discussion about Syrian refugees returning to Syria. Syrian refugees who left Syria because of the killing and destruction systematically imposed by Assad and his allies have rights. At the same time, Turkey received millions of refugees, and this, in one way or another, is a burden on the neighbor countries despite the Syrian elite being in Turkey. Recently the issue of illegal migrants in Turkey has been opened. Everyone who has the proper papers has been free to go about their business, but there are some that are violating the laws. The coalition intervened immediately and contacted the Turkish authorities to discuss the issue and resolve the problems. In this context, some important points have been scored, with Turkey giving a deadline and settling the status of many. Let’s not forget that Turkey is bearing the concern of negotiating with the Russians with regards to the ceasefire in Idleb and elsewhere.