In an interview with Zaman Al Wasl, the head of the White Helmets, Raed Saleh, speaks of the difficulty the group faces and what the future may hold. 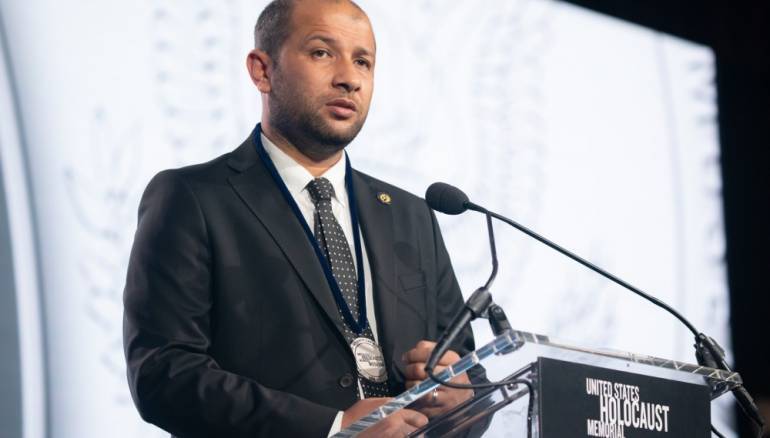 The head of the Syrian Civil Defense accused Russia of targeting the members of the rescuing group in order to eliminate witnesses of its crimes in Syria, and then downplay the importance of the evidence provided by the humanitarian organization about those crimes.

In interview with Zaman al-Wasl, Raed Saleh confirmed that the White Helmets will be the first to provide evidence of the crimes committed against the Syrian people by Russia, Iran and Bashar al-Assad’s militias.

Zaman al-Wasl: What is the role of the United Nations in supporting the “White Helmets”? What is your comment on the UN providing the Assad regime and Russia with the locations of hospitals and civil defense centers?

Raed Saleh: The United Nations is ineffective, so we believe there is much that can be done by the UN when talking about Syria, yet we are constantly working to keep it informed so that it can change the current reality.

As for the issue of sharing the locations of our medical centers with the Assad regime and Russia, we have previously warned them of the consequences of sharing this information because of the history of the Syrian regime in targeting field hospitals, medical points, ambulances and paramedics. We witness the near daily targeting of these centers, and the consequences on the lives of civilians and their ability to continue resisting.

ZW: Why is the Assad regime and Russia marketing you as a “terrorist” organization, and what is the danger posed by a humanitarian civil organization to a major country like Russia?

RS: The Syrian Civil Defense serves as the first responders to the atrocities committed by the regime and Russian forces, so we are targeted by various means. The misleading Russian media is trying to downplay the evidence we give of war crimes committed by the Russian coalition against Syrian civilians, which is terrifying Russia and the regime. But, the truth will come out and we will be the first to provide evidence of their crimes to the world.

ZW: How many civil defense centers have Russia and the Assad regime targeted, and how many victims? Why this systematic targeting?

RS: The number of martyrs from the Syrian Civil Defense is 269 to date, and our centers have been targeted more than 380 times since 2013. Although this targeting is a war crime, it shows their insistence on targeting humanitarian workers and medics, in order to kill the spirit of survival in the civilians, who rely heavily on us to stay in their cities and villages. We believe that we provide services that contribute significantly to the stability of civilians.

ZW: What is the fate of the civil defense elements who were forced to “settle” with the regime after they were cut off in Daraa and Quneitra, and how many are they?

RS: We do not know much about the fate of the volunteers who chose to stay. We have lost contact with them, but we wish safety and security for them and their families.

ZW: On what basis were members of the White Helmets selected to enter Jordan following the invasion of Daraa and Quneitra?

RS: There was no basis other than the personal choice of the volunteers. Those who wanted to stay remained at their personal responsibility. The rest left after considerable efforts from the UN and some countries supporting our work to ensure their safety.

ZW: Many people in the south accused the Civil Defense of negligence during the invasion of Daraa. What is the reason, and what have you done to remedy this in the liberated north?

RS: Without taking into account the logistical issues we face on a daily basis, it may seem to some that we have fallen short, but I can assure you that we have done everything we can to be with our people in Daraa, and we reach everywhere we can.

ZW: What is the role of the White Helmets in Turkey and opposition-controlled areas, especially in Ghosn Zeitoun and Dera al-Furat?

RS: We do not differentiate between Syrian cities, we work everywhere in the same way and always hope to improve our work, but of course, the nature of the services we provide in relatively safe areas is different from those in areas that are caught in military operations. Our main goal is to facilitate the lives of Syrians wherever they are. For example, we are conducting street cleaning campaigns, strengthening electricity and water networks in safe areas, opening closed roads, and helping to provide primary medical services to women and children, as well as many other services, because these places are somewhat safe.

ZW: What will be the fate of the White Helmets if Russia and Assad take control of Idleb province?

RS: It is difficult to answer this question and we hope that we will not reach this scenario. But I think the question should be about the fate of the three and a half million civilians residing in the province.

ZW: What is the level of cooperation between the White Helmets and the International Committee of the Red Cross?

RS: Currently, there is no cooperation between the two organizations, yet we look forward to building a good relationship that serves civilians. We also want to provide our staff with the expertise of a large organization such as the ICRC.