Speaking exclusively to Asharq Al-Awsat, Qadri Jamil denies claims he was proposed as a potential replacement to Assad by the Russians 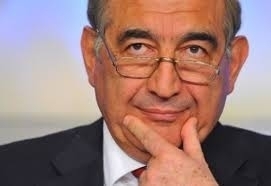 In exclusive remarks to Asharq Al-Awsat, Syria’s former deputy prime minister, Qadri Jamil, denied on Wednesday that he had been put forward by the Russian government as a possible leader for a post-Assad Syria.

Speaking to Asharq Al-Awsat after the news broke that he had been fired by Syrian president Bashar Al-Assad for unauthorized contact with foreign—including American—diplomats, Jamil said: “This issue has never been put forward to me, and I do not allow it to be discussed because I consider it the task of the negotiators at the Geneva II conference.”

Jamil met with the US envoy for Syria, Robert Ford, on October 26 in the Swiss city of Geneva, the venue for the second eponymous peace conference on the Syrian crisis planned for the end of November.

Syrian state TV announced that Jamil had been fired on October 29.

The former deputy prime minister branded speculation in the media that he had been fired because he sought to promote himself as an alternative to Bashar Al-Assad as “superficial and trivial.”

However, Jamil criticized Assad’s government, saying, “The regime wants everything to be under its control,” adding that its current policy is “no different from that of the ruling one-party state.”

Jamil, a former member of the Syrian Communist Party, has strong connections with policymakers in Moscow, where he has been living his family, fuelling speculation that Assad feared he was becoming a potential successor in the eyes of Moscow, one of Syria’s key backers.

For his part, Jamil dismissed such claims, stressing that he has been dealing with all sides involved in the Syrian crisis, including the Russians and the Americans.

Jamil, who claims to be an opponent of the current Syrian government, was given the post of Deputy Prime Minister and the Minister of Internal Trade and Consumer Protection in October 2012 under Prime Minister Riyad Hijab—who has since defected to the opposition—in an attempt by Assad to incorporate what he calls the “patriotic opposition” into the regime.

The leader of the Popular Front for Change and Liberation, Jamil said his front has always been against calling for Assad to step down, as such a step would “damage national interest and shut the door on any dialogue,” adding, “Before entering the government and after leaving it, our stance has been firm with regards to rejecting setting any preconditions.”

The Syrian regime defended its decision by citing Jamil’s unauthorized contacts with foreign diplomats and absence from his post. Jamil responded by saying: “We are an independent political opposition front that has been making contacts from the beginning without coordinating with anyone except ourselves.”

Jamil denied that any communications have taken place between him and the Russians or the Americans since his sacking, adding “I received congratulatory phone calls on getting rid of my friends in the opposition, as well as the figures associated with the regime.”

As for Geneva II, Jamil said: “I am not pessimistic,” saying that the conference will “succeed in getting Syria out of its crisis.”

When asked about his participation in Geneva, Jamil said: “The nature of our representation has not been determined yet, but we are pushing for all the opposition sides to be represented not only the Syrian National Coalition, which is no different from the regime in adopting the policy of a one-party state.”

“We are working on a pluralistic opposition that represents the future Syria, and our aim as revolutionary fighters is to stop the bloodletting and rescue Syria from the situation it is in today by finding the safe exit out of this crisis via reconciliation and dialogue,” he added.

Jamil criticized calls for the Syrian opposition to be represented by a unified delegation in Geneva, saying, “Pluralism is needed and communications with all sides from the opposition and regime are ongoing.”

Jamil pledged to “return to Damascus in the second half of November, once I finish my work in Moscow to perform my role as an MP and a representative of the Syrian people who have elected me.”