Even now, the president said, the administration has difficulty finding, training and arming a sufficient cadre of secular Syrian rebels: “There’s not as much capacity as you would hope” 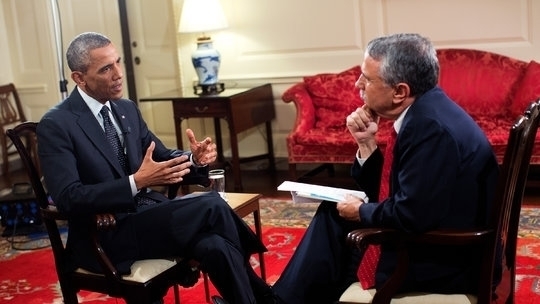 In an interview with the New York Ed columnist Thomas L. Friedman published Friday, President Barack Obama said the notion that arming the rebels would have made a difference is a fantasy.

Obama explained that this notion has “always been a fantasy. This idea that we could provide some light arms or even more sophisticated arms to what was essentially an opposition made up of former doctors, farmers, pharmacists and so forth, and that they were going to be able to battle not only a well-armed state but also a well-armed state backed by Russia, backed by Iran, a battle-hardened Hezbollah, that was never in the cards.”

Even now, the president said, the administration has difficulty finding, training and arming a sufficient cadre of secular Syrian rebels: “There’s not as much capacity as you would hope.”

He added, the “broader point we need to stay focused on,” he added, “is what we have is a disaffected Sunni minority in the case of Iraq, a majority in the case of Syria, stretching from essentially Baghdad to Damascus. … Unless we can give them a formula that speaks to the aspirations of that population, we are inevitably going to have problems. … Unfortunately, there was a period of time where the Shia majority in Iraq didn’t fully understand that. They’re starting to understand it now. Unfortunately, we still have ISIL [the Islamic State in Iraq and the Levant], which has, I think, very little appeal to ordinary Sunnis.” But “they’re filling a vacuum, and the question for us has to be not simply how we counteract them militarily but how are we going to speak to a Sunni majority in that area … that, right now, is detached from the global economy.”

The president said that what he is telling every faction in Iraq is: “We will be your partners, but we are not going to do it for you. We’re not sending a bunch of U.S. troops back on the ground to keep a lid on things. You’re going to have to show us that you are willing and ready to try and maintain a unified Iraqi government that is based on compromise. That you are willing to continue to build a nonsectarian, functional security force that is answerable to a civilian government. … We do have a strategic interest in pushing back ISIL. We’re not going to let them create some caliphate through Syria and Iraq, but we can only do that if we know that we’ve got partners on the ground who are capable of filling the void. So if we’re going to reach out to Sunni tribes, if we’re going to reach out to local governors and leaders, they’ve got to have some sense that they’re fighting for something.” Otherwise, Obama said, “We can run [ISIL] off for a certain period of time, but as soon as our planes are gone, they’re coming right back in.”

Is Iran being helpful? “I think what the Iranians have done,” said the president, “is to finally realize that a maximalist position by the Shias inside of Iraq is, over the long term, going to fail. And that’s, by the way, a broader lesson for every country: You want 100 percent, and the notion that the winner really does take all, all the spoils. Sooner or later that government’s going to break down.”

The only states doing well, like Tunisia, I’ve argued, have done so because their factions adopted the principle of no victor, no vanquished. Once they did, they didn’t need outside help.

For the full interview see: http://www.nytimes.com/2014/08/09/opinion/president-obama-thomas-l-friedman-iraq-and-world-affairs.html?_r=0