Marcus Papadopoulos tells pro-government e-newspaper The Syria Times that as long as militant groups control the Ghouta, the U.S. and U.K. will hold hope Damascus can be taken 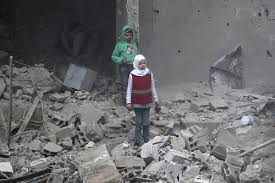 The liberation of East Ghouta from the Wahhabist terrorist organizations by Syrian army will destroy Washington and London's aspirations of conquering Damascus, and it will be an act of deliverance for the people of both the Eastern Ghouta and the capital, according to Dr. Marcus Papadopoulos, British publisher and editor of Politics First, who asserted that every advance that the Syrian army makes weakens the Wahhabist terrorist threat to the U.K.'s national security.

In an interview with the Syria Times e-newspaper, Papadopoulos made it clear that the American and British governments are falsely portraying the liberation of the Eastern Ghouta as the Syrian government "slaughtering its own civilians," because Washington and London know that their aspirations of conquering Damascus, through the use of Wahhabist terrorist groups, are soon to be destroyed by the men and women of the Syrian army.

He said: “Since the end of 2012, East Ghouta has been occupied by various groups affiliated to Al-Qaeda, who have been supported – politically, militarily and logistically – by the Americans and the British, in the hope that these terrorist groups would enter Damascus and bring about the downfall of the Syrian government. Despite Washington and London's proxy terrorist groups having suffered irrevocable losses up and down Syria, as long as East Ghouta is occupied by these terrorists, a flame of hope flickers for the Americans and the British, that the Syrian capital can be conquered, which would result in the collapse of the Syrian government. In other words, the terrorist occupation of East Ghouta constitutes a potential knife to the heart of Syria. However, now that East Ghouta is being freed by the Syrian army, bringing to an end a reign of terror for the region's inhabitants, that has involved unimaginable crimes against humanity, the threat to Damascus is soon to be extinguished.”

“Once the men and women of the heroic, secular and multicultural Syrian army completely liberate East Ghouta, not only will the inhabitants of this region be safe from death but so, too, will the inhabitants of Damascus itself, who, for six years or so, have faced daily mortaring from the terrorists controlling East Ghouta. Thousands of innocent men, women and children in Damascus have died horrible deaths at the hands of American and British-backed terrorists in East Ghouta. The liberation of East Ghouta will be an act of deliverance for the people of both East Ghouta and Damascus,” the British political journalist added.