The regime in Syria is promoting solar energy as a source of electricity, a way for Assad to mitigate the effect of cuts and please his cronies, according to al-Modon. 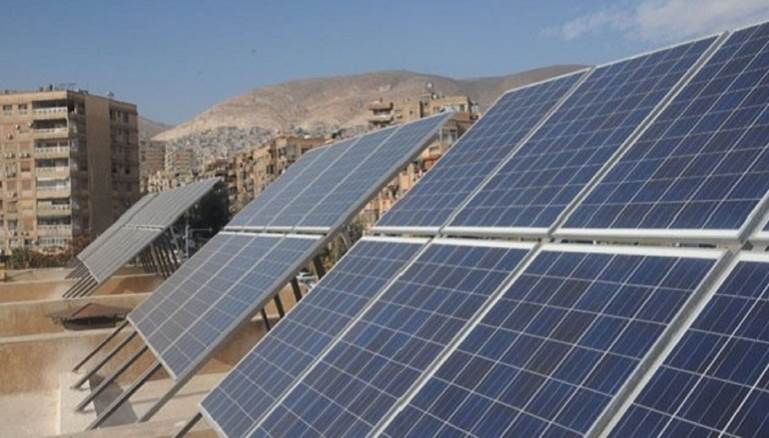 The regime in Syria recently discovered alternative energy (solar in particular) as a solution that mitigates the criticisms it faces due to power outages. This might be a promising opportunity to create a new market that generates profits on its treasury through taxes imposed on imported energy supplies.

As the Syrians firmly believe that electricity supply will not improve in the short term, some residents of the regime-controlled areas resort to alternative energy (household electricity), but to a limited extent. Household electricity has high prices (6 million Syrian pounds per house) compared to the level of income and eroded purchasing power.

The regime is almost saying that alternative and solar energy will push Syria towards a new phase. Just as its army achieved “victory” over the international conspiracy, alternative energy can secure electricity and “win” over the darkness that envelops Syrian cities.

In line with the regime’s policy of imposing everything under duress, the regime intends to oblige industrialists in its areas of control to use alternative energies (solar and wind) instead of electricity, either fully or partially.

The pro-regime newspaper al-Watan quoted a source as saying that the industrial sector consumes more than 20 percent of the total electricity available. The source added that the bill paves the way for increasing reliance on renewable energies and making electricity available for domestic consumption.

Al-Modon sources do not rule out that the decision if approved, refers to Assad’s war-profiteers in alternative energy businesses. This approach would be based on the attitude in dealing with anything that would generate profit, even if those projects were useless- especially for an industry that requires 24-hours access to electricity.

According to sources in Damascus, the spread of alternative solar energy supplies in the Syrian markets is noteworthy. For the same sources, this confirms the entry of companies close to the Assad family into this sector, as in the case with mobile devices, and other sectors in the economy.

However, writer Ziad al-Rayes confirms that the volume of “alternative energy” trade in the regime’s regions is still modest. Energy demand is very limited, given its high cost and the lack of feasibility compared to that cost.

He explains to al-Modon, there is not sufficient infrastructure available to allow factories and plant owners to adopt alternative energy. “The current system allows factory owners to depend on alternative energy as an electricity source at some times (during daylight hours) while relying on traditional electricity supply at other times (night and cloudy days). The system is unable to supply electricity to factories, which means that this option is not feasible for factories that do not stop working,” he added.

Rayes continued by saying that companies operating in the field of “alternative energy” in regime-controlled areas are still mostly simple companies.

Since alternative energy supplies are produced in China, the regime encourages the import of any Chinese product. This was emphasized after Chinese Foreign Minister Wang Yi’s visit to Damascus in mid-July, which may be a motive for Beijing to abandon its caution towards Syria and invest in large projects.

In a similar context, an official in the Damascus Chamber of Industry identified the lack of electricity and energy as the leading cause for Syrian industrialists migrating to Egypt. The head of the Damascus and Its Countryside Chamber of Industry’s textile sector, Muhannad Da’adoush, said that Syria has seen an “artificial” migration of industrialists to Egypt for nearly one year.