The Central Bank has released the 5,000 Syrian pound banknote, but it is expected that it will cause a devaluation of the currency and further inflation reports Enab Baladi. 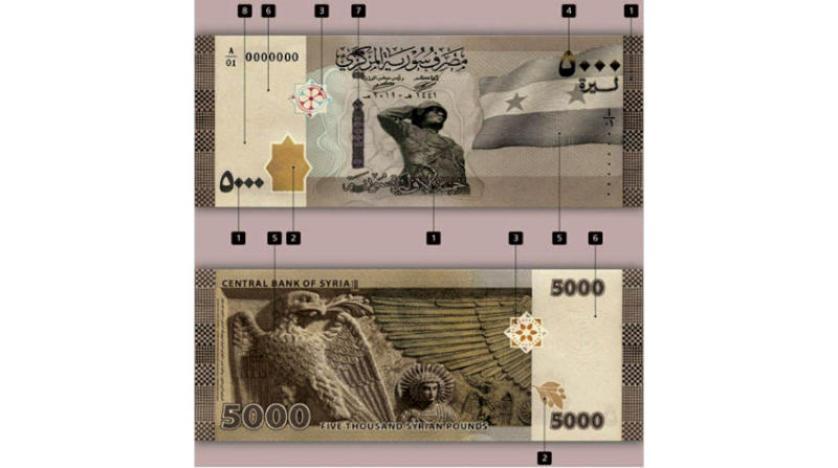 The Central Bank of Syria’s offering of a new 5,000 Syrian pound bill for circulation raised questions about future consequences on the Syrian citizen and on the currency’s value.

According to two economic analysts that Enab Baladi spoke with, the effects of offering the cash denomination on the Syrian economy are determined by two factors, the first being the withdrawal of old bills, and the other is related to production in the country.

Dr. Firas Shaabo, a PhD in banking and finance, told Enab Baladi that high currency denominations are indicative of the “abnormal” state of the economy, and will likely have “significant negative repercussions on the homeland and the Syrian economy.”

Shaabo explained that the economic situation in Syria was “very bad” in late 2020 and, therefore, the new cash denomination was introduced at the beginning of 2021, noting that the move “ is a reflection that the Syrian economy is suffering.”

The issuance of the new denomination was “expected”, with leaks about the new offering, already being announced, as per Shaabo, who indicated that the regime, “was no longer able, since the beginning of the year, to control its expenditures, and that is why the new cash bill was introduced.”

The currency is like a commodity, Shaabo said, and an increase in supply would reduce its price.

The introduction of the new denomination will lead to “greater inflation, and the value of the currency will decrease further,” in case an amount of currency equal to the amount introduced is not withdrawn from the market.

The value of the Syrian pound decreased slightly as soon as the new denomination was announced. The exchange rate of one dollar on the black market in Damascus reached 2,960 pounds, according to the Syrian Pound Today website, which tracks exchange rates.

Economic researcher, Adham Qadimati, believes that withdrawing the old bills may “mitigate the negative effects of offering the new denomination,” but, “there is no supervisory authority that controls the Syrian regime’s offering of the amount of new cash on the market.”

In an interview with Enab Baladi, Qadimati explained that small cash denominations will be automatically withdrawn due to their uselessness, amid the devaluation of the Syrian pound.

He added that the introduction of a large cash denomination would negatively affect the value of the pound, which will witness further devaluation against foreign currencies, especially since Syrians have little confidence in the Syrian pound and use the US Dollar to price goods.

The Minister of Economy and Foreign Trade in the government of the Syrian regime, Samer Khalil, said that the introduction of the new currency “will not lead to inflation,” indicating that there is no “increase in the monetary base, but rather only a replacement of one banknote with another.”

On the other hand, several local councils operating in the opposition-held northwestern regions did not allow the circulation of the new banknote in their areas.

The Director of Public Relations in al-Rai’s local council, Alaa Hamad, spoke to Enab Baladi about the reasons for issuing the ban, pointing out that the use of the new denomination was prevented in the northwestern regions because it is a currency with no financial significance, just like the 2,000 Syrian pound bills that were previously issued.

He added that the ban came in to prevent the regime’s attempt to pump the new banknote into the markets of the northern countryside, in an attempt to drain the region’s stock of US dollars and Turkish lira, in addition to their commitment to cutting off dealing with the Syrian regime at various levels, including the financial one.