Dr. Zaher Sahloul and Maysoon Almisri were awarded The Gandhi Peace Award for their work to help civilians in Syria and their peace building efforts. 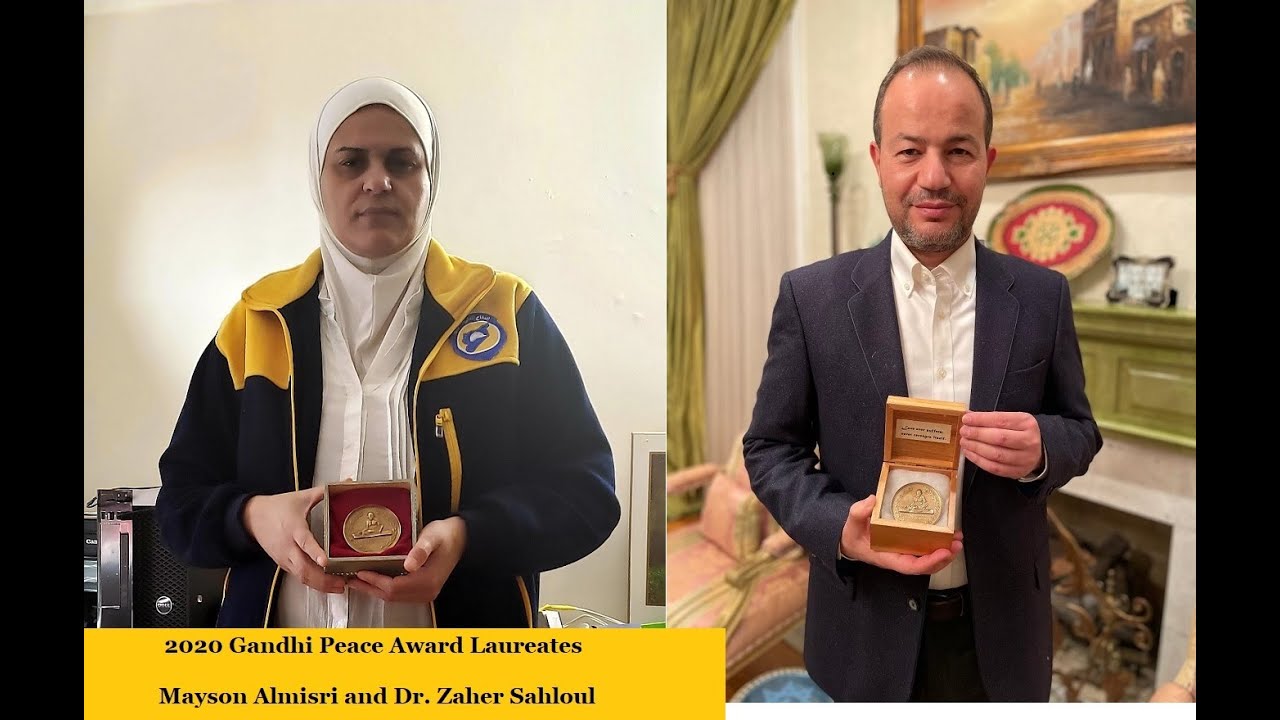 In a significant gesture by an American liberal organization, two influential Syrians were presented with a prestigious award.

Promoting Enduring Peace, a nonprofit group, announced the recipients in March. Dr. Zaher Sahloul and Maysoon Almisri from Syria were given the prestigious award.

Sahloul is a physician and past president of the Syrian American Medical Society (SAMS), and Almisri is a former volunteer with the Syria Civil Defense (also known as the White Helmets), who rescued civilians caught up in Syria’s civil war.

The Gandhi Peace Award has been presented since 1960. Its laureates include Eleanor Roosevelt, Dorothy Day, Benjamin Spock, Caesar Chavez, Martin Luther King Jr., Bill McKibben, Ralph Nader, Amy Goodman, Jackson Browne and many more. The award comes with a 5,000 dollar prize and a medal fashioned from “Peace Bronze”, which is formed from metals extracted from retired nuclear weapons systems.

The Syrian Observer spoke to both recipients to understand what this award meant to them and what it means for the Syrian cause. Dr. Sahloul said that he looks at the award as a recognition not of him personally but of the Syrian healthcare professionals on the frontline of defending medical neutrality and who have built resilience within their communities throughout the 10 years of war. He said the award recognizes the brilliant performance of the medical staff who fought for the safety of the Syrian people, “in spite of limited resources, the frequent use of barbaric siege tactics, chemical weapons, illegal weapons like cluster bombs, and more importantly being systematically targeted by the Assad regime and Russia.” More than 930 Syrian doctors and nurses have been killed on duty and more than 550 hospitals bombed according to Physicians for Human Rights.

Maysoon Almisri told The Syrian Observer she felt motivated morally by the award. She says the award came just at the right time to highlight the great suffering of the Syrian people. “The Syrian people are enduring the international community’s negligence. Their agony continues to this day. My organization continues its work in extremely difficult circumstances.”

Both recipients highlighted the lack of material and logistical capabilities, and the continued bombing of civilians on the one hand and defense centers and civil personnel on the other hand.

The Gandhi Peace Award has been presented annually since 1960 to individuals and influencers who contributed to world peace, human rights, justice, and goodwill. This is the first time it has been awarded to a Syrian or a Muslim American.

According to Dr. Sahloul, the award is, “a recognition by the Left of the just struggle of the Syrian people against tyranny, brutality and oppression and also to counteract the disinformation campaign waged by the Assad regime, Russia, Russia Today and people like Max Blumenthal, Rania Khalek, Sara Flounders, Eva Bartlett, Vanessa Beeley and Congresswoman Tulsi Gabbard.”

Dr. Zaher Sahloul is from Chicago and has given an enormous amount of his time to helping Syrians. He was last in Syria last winter. He is currently the president of Medglobal, which gives crucial help to victims in fourteen countries. Dr. Sahloul is a pulmonary specialist based in Chicago and has treated many patients suffering from Covid-19. He has frequently been quoted in the media, including the Wall Street Journal and Democracy Now!.

He believes that it is important that, “progressive and justice organizations and activists differentiate between the lies and propaganda of the Syrian regime and its allies and between facts on the ground.”

Regarding how Dr. Sahloul see the positive impact of the award on his performance as an activist and influencer, he said, “The award brings attention to the principled struggle of the Syrian people for self determination and dignity, at a time when the world is paying no or minimal attention.”

“It also coincides with the Biden administration coming to power,” he added.

He hopes it will serve as a reminder to the Democratic administration of its responsibility towards the Syrian people in order to avoid the mistakes that its predecessors have made in Syria.

“What happens in Syria matters,” he said, “and it will come back to haunt us if we don’t end the crisis and bring peace.”

Almisri told The Syrian Observer that the award has prompted her to work more to alleviate the suffering of the people in Syria and to continue volunteering for the White Helmets Organization from her exile in Canada.

In 2018, Almisri and her husband, along with dozens of other White Helmet volunteers, were evacuated to Canada after enduring relentless shelling and bombardment. The Toronto Star reports that Almisri and her fellow evacuees are slowly rebuilding their lives, while worrying about those still in danger.

Almisri has been a volunteer in the Civil Defense, since its establishment in Daraa.

“It has been the most beautiful and most inspiring thing I have done in my life,” Almisri says.

Before working for the White Helmets, Almisri worked in the media. She still admires the role of the media and the people who wok in that domain, but for her, it is more inspired by rescuing the people lives.

“Working with the White Helmets,” she says, “gives me a strong motivation to continue difficult challenges and alleviate the suffering of our people, and today my pride is in my organization, which embodies the beautiful Syria with all its sects and affiliations.”

Operating in areas of Syria controlled by opposition forces, the White Helmets have been attacked by Damascus and Moscow for documenting war crimes perpetrated by both of those regimes.