Northwestern region of Syria is witnessing a surge in coronavirus cases, with the area now recording 300-500 infections a day reports Asharq Al-Awsat. 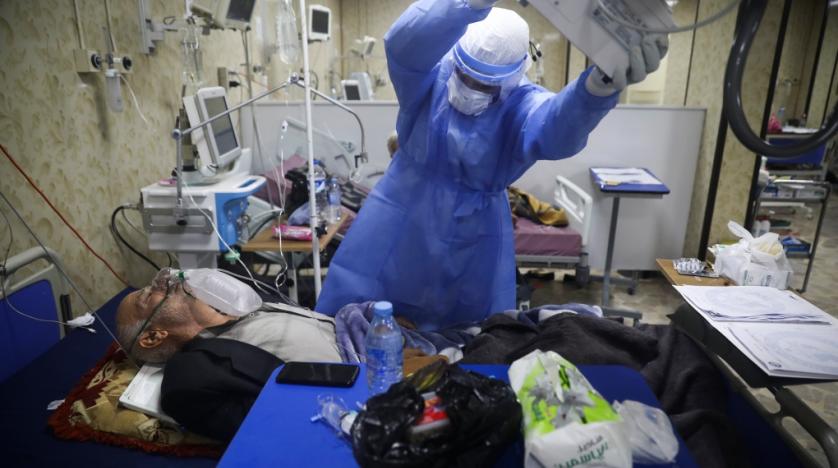 Nurses hover over a patient to insert a breathing tube as his condition suddenly deteriorates. ICU beds fill up almost overnight. As one patient dies of the coronavirus and is wheeled out, another is whisked in to take his place. An exhausted doctor leans against a wheelchair for a breather.

The pace is dizzying at the largest isolation hospital in Syria’s northwestern city of Idleb. There are no bombs falling outside and the wounded don’t crowd bloodstained corridors amid a shaky cease-fire in the country’s decade-old civil war. Still, the intensive care unit staff is overwhelmed with beds full of elderly patients gasping for air.

COVID-19 infections in the last opposition-controlled territory in Syria have been increasing rapidly. Spared until July, the region is now recording 300-500 infections a day, and the number is rising fast.

The area, battered by repeated military offensives from the government of President Bashar Assad, is home to nearly 4 million people, most of them displaced and living in tent camps or unfinished buildings.

Infection rates jumped nearly twentyfold between September and October, the UN said. Since then, it has climbed 300%, with nearly 11,900 cases recorded by Nov. 16, up from 8,100 a week earlier.

The number of infections is probably much higher. Cities have been hit hardest, but workers fear the virus will take hold in overcrowded camps.

“There are many patients, most in very bad condition. We have no time to give them all they need,” said Aref Shabib, one of over 95 nurses and technicians in the 70-bed isolation hospital, one of two in the city of Idleb, now a virus hot spot.

The pandemic, which has severely tested even developed countries, is the biggest challenge yet for Syria’s health sector, already depleted by years of conflict. Authorities are pacing themselves, deploying equipment and supplies where needed in war-scarred areas.

Ambulance driver Rami Khalaf ferried a patient and a nurse for three hours from the city of Idleb to a southern town for a breathing machine. By the time they arrived, they found there was no oxygen available, so they headed to a third location, another three-hour drive.

With the nurse tending to the unconscious patient with one hand and operating a walkie-talkie in a search for life-saving equipment with the other, they drove more than 200 kilometers (125 miles).

Khalaf sat sweating behind the wheel for seven hours in his hazmat suit and mask, driving on unpaved and bombed-out roads. “We are living a new difficult experience,” he said.

At least Khalaf didn’t have to dodge bombs. Medical teams and hospitals often were targeted by government forces that accuse them of treating “terrorists” — its label for opposition fighters.

But carrying virus patients is a new challenge. Khalaf transported nearly 50 patients in 10 days, up from practically none in October. He keeps away from his children for two to three days to avoid infecting them.

“It is a new terror that is going around among us,” he said.

Announcements of virus deaths on social media or mosque loudspeakers compete with posters honoring those killed in battle, with 95 fatalities linked to COVID-19.

As winter rains began, bringing with it renewed rumblings of war, fear is growing that exhausted medical teams may not be able to cope.

Nearly 17% of infections were among health workers, who were first to get the virus. At least three doctors and an administrator died. Medical workers who survived the battlefield find themselves fighting an invisible enemy that pushes their resilience to new limits.

Unlike the war wounded, an entire 24-hour shift can be devoted to just one COVID-19 patient, said Shabib, the ICU specialist.

“We could work for six or eight hours nonstop without even sitting down. It is very hard work,” he said.

At the Ziraah or Agriculture Hospital, most of the 42 patients were elderly. At least 16 were getting some form of breathing assistance, said Dr. Salah Eddin al-Saleh, in charge of the ICU at the hospital operated by the Syrian American Medical Society.

Al-Saleh said he had to turn some patients away.

“We are working at full capacity and all our (ICU) beds are taken. The minute one bed is empty, a patient is admitted,” he said.

In northwestern Syria, which has been outside government control for most of the last decade, dispersing aid is as complicated as the politics of the conflict.

According to the UN task force coordinating efforts, there are at least 142 ICU beds and 155 breathing machines in use in the area. The plan is to eventually have 219 ICU beds and 162 machines. Nearly 500 doctors and nurses are working in COVID-19 centers.

Seven of eight hospitals in northwestern Syria that are equipped to treat the virus are already overwhelmed.

“The increase in COVID infections, cases of hospitalization and nearing full occupancy of ICUs, brings us closer to a state of emergency,” said Salem Abdan, head of Idleb’s health directorate.

Infections also are rising at the overcrowded camps housing many of the nearly 1 million people who have been displaced since the last government offensive in March.

Dr. Nasser AlMuhawish, who compiles virus data from his base in Turkey, said only about 8% of infections in the camps have been recorded, and teams are increasing their screenings.

For Syrians who have survived so much adversity, the virus seems to be the least of their worries. Social distancing is nearly impossible, with a single tent or temporary shelter housing between nine to two dozen people, some who have been repeatedly displaced.

“People in Idleb have suffered the worst impacts of the conflict over 10 years,” said Misty Buswell, Middle East advocacy director for the International Rescue Committee. “A lot of people are saying … being displaced is much harder than anything coming from COVID. At this point, I think we have to qualify that and say, ‘Up until now.’”

With an economic crisis gripping Syria, the local currency tumbling and resources in war zones shrinking, even the price of soap and water is soaring.

Residents who have supported each other during cycles of violence describe a new sense of fear.

“I don’t leave my house except to buy bread and food,” said Yasser Aboud, a father of three who has had seven relatives test positive. “I’m diabetic and worry I may get infected.”

A neighbor died of COVID-19, but Aboud was afraid to pay his respects.

With fighting threatening to resume and bring a new wave of displacement, Buswell fears a “perfect storm” could be gathering, especially if infections rise like in Europe and the US.

Virus misinformation also is spreading, such as eating garlic and onions as a preventative. Some see masks as a sign of infection, adding to the stigma of covering up.

Children play a game in which one picks up a mask found on the street and chases others screaming: “COVID! COVID!”