Donald Trump could be voted out office, but looking back, his actions in Syria have had a lasting impact that will continue to shape future US policy writes Baladi News. 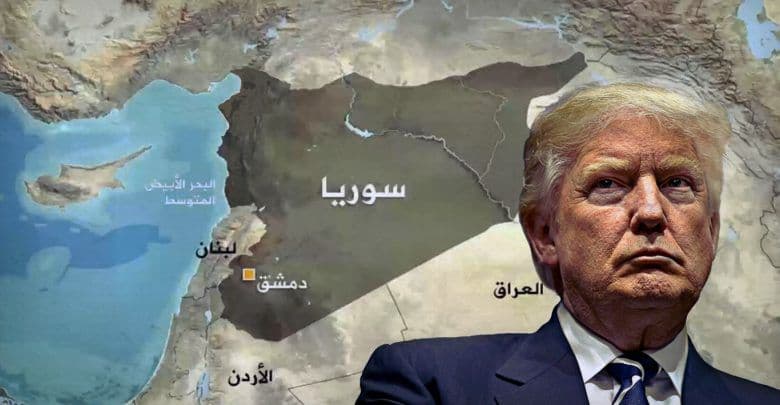 Four years after the election of US President Donald Trump on Nov. 8 2016, the Syrian file witnessed many changes, after Trump pledged to radically change his country’s policy towards Syria, especially with regards to eliminating terrorism, holding the Assad regime accountable, retaliating against Russia for its involvement in US presidential election fraud, Syrian oil, and immigration.

Trump actually succeeded in meeting many milestones regarding Syria. He also succeeded in polishing his image by announcing the killing of Islamic State leader Abu Bakr al-Baghdadi in Syria. Baghdadi was considered the most dangerous terrorist in the world.

On Sept. 27, 2019, the US Department of Defense managed to kill Baghdadi as part of an operation called Operation Kayla Mueller in the northern countryside of Idleb Governorate. The operation was carried out by special forces in the US Army and was supervised by the CIA.

The US military gave the operation the name Kayla Mueller as a reference to a young American woman who was kidnapped and held hostage by the Islamic State. Baghdadi had repeatedly raped her before she was killed.

On Dec. 20, 2019, Trump signed the Caesar Syrian Civilian Protection Act, as part of his approval on the defense budget, estimated at 738 billion dollars.

The Caesar Act imposes new sanctions on Syrian officials and obliges the US to support the international prosecution of those accused of human rights violations.

The law’s name is a reference to a person who identified himself as “Caesar”, a dissident from the Syrian regime, and who, at the beginning of 2014, had leaked about 55,000 pictures documenting the killing of 11,000 prisoners after being tortured in Assad’s prisons.

On Oct. 23, 2019, Trump announced the success of establishing a safe zone, agreed upon with Turkey, in northeastern Syria, following the Russian-Turkish agreement that ended Turkish military operations in the region.

The Turkish Anadolu Agency reported at the time that Ankara and Washington had reached an agreement to form a joint operations center in Turkey to coordinate and manage the establishment of a safe zone in northern Syria.

The Turkish Ministry of Defense also said that it was agreed with the American side to turn the safe zone into a peace corridor and take all additional measures to ensure the return of Syrians to their country.

On Apr. 14, 2018, Trump said that he had given orders to strike the Syrian regime’s sites in a joint operation with the French and British armed forces in response to chemical attacks that the West accused the regime of launching in Douma, Eastern Ghouta.

At the time, Trump explained in a televised statement that, “Putin and his government pledged to eliminate Syrian chemical weapons in the past, and today’s strikes are a result of Russia’s failure to do so.”

The regime’s news agency, SANA, said that 110 rockets were fired at Syrian targets in and outside Damascus.

Trump also said that he made the decision after reading a news report that indicated that the US had recently pledged an additional 200 million dollars to support early reconstruction efforts in Syria.

On Apr. 7, 2017, the US Navy targeted the Shayrat military base near Homs, with Tomahawk missiles, which was the base from which a raid was launched on the city of Khan Sheikhoun, near Idleb.

The American strikes on Shayrat came as part of the response to the chemical attack on the city of Khan Sheikhoun, south of Idleb, on Apr. 4, 2017.

Back then, the Organization for the Prohibition of Chemical Weapons issued a report in which it held the Syrian regime forces responsible for three chemical attacks in the city of al-Lataminah in the Hama countryside in 2017.

No Syrians in America

On Jan. 27, 2017, Trump banned the entry of Syrian refugees to the US until further notice, in what Trump considered new measures that aim at “preventing radical Islamic terrorists from entering the US”

At the time, Trump signed an executive order stipulating a four-month suspension of entry for all refugees.

On Dec. 3, 2019, Trump announced that the US had placed Syrian oil under American control and was able to do with it as it pleases.

He explained at the time that the Islamic State tried to preserve its control over the oil, but now, “it is we [US] who are in full control of it. And I say quite frankly that in this regard we enjoy the support of a large number of people. In fact, the oil is in our hands and we can do whatever we want with it.”

Trump’s term may end on Wednesday for he might lose the elections to his rival, Democratic candidate Joe Biden.