Following recent altercations, Russia and the US have reinforced their numbers in northeastern Syria, to secure their positions and prevent further clashes writes Baladi News. 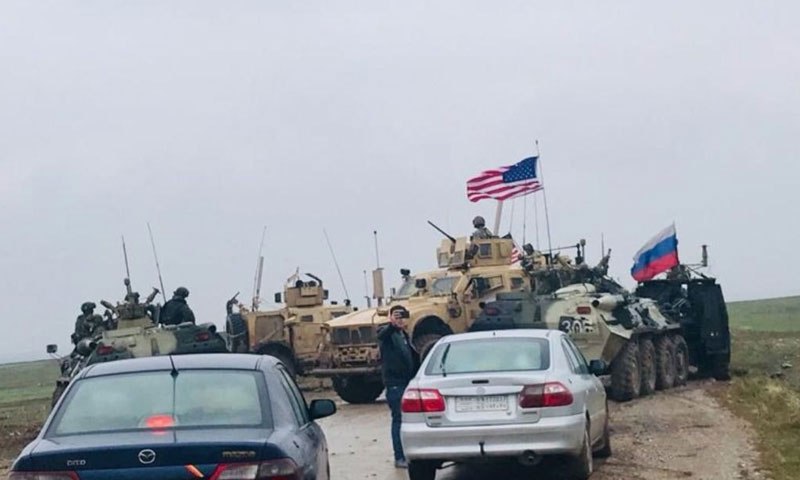 Most of northern and eastern Syria is under the control of the Syrian Democratic Forces (SDF), which are mainly supported by the US-led International Coalition. The regime also shares control of Hassakeh with the SDF as well as two military sectors and the Qamishli airport. Last October, it began widening its spread over the areas facing the region under the control of the Turkish forces and the Syrian National Army in Ras al-Ayn and Tel Abyad.

The eastern region of Syria has witnessed a number of incidents and clashes between US and Russian forces, who have been patrolling eastern Syria as of late. Last month, four American soldiers were injured in a clash between Russian military vehicles near Derik in northeastern Syria.

Commenting on the reason for the reinforcements, spokesperson for the US Central Command, Bill Urban, said that the US does not seek to clash with any other country in Syria, but will defend the coalition forces if necessary, implicitly alluding to Russia.

Urban stressed that, “these measures and military reinforcements are clear evidence of the determination of the US to defend the coalition forces in the eastern region of Syria.”

Editor-in-Chief of Al-Sharq news website, writer Firas Allawi, said that there are multiple reasons behind the sending of reinforcements by the US and Russia to northeastern Syria, indicating that the frictions that recently occurred between the two parties prompted each of the superpowers to further reinforce their forces in the region in preparation for the possibility of any clash of any type between them.

Allawi explained to Baladi News that the reinforcements by the two parties are not significant. For the US, they only consist of six Bradley Fighting Vehicles and a 100 fighters, merely a precautionary increase in anticipation of any tension or friction with the Russians.

He pointed out that the Russians are trying to increase their forces in northeastern Syria, as part of Moscow’s policy to restore order in the region, which is also a part of a rapprochement attempt with SDF, all the while trying to gain power over areas under US control, pointing out that the statement by Russian Foreign Minister Sergey Lavrov, about the cessation of fighting between the regime and the opposition means that Russia will move to the eastern Euphrates region, which Lavrov said the regime does not control.

He pointed out that the US reinforcements aim to fill a void in the region, especially with the withdrawal of forces from Iraq, which means Washington may have plans to build a base in northeastern Syria and thus establish a long-term presence in the region. Add to that the security chaos in the region related to the Iranian presence, the role of the regime, as well as the increasing rejection of SDF forces, and the attempts to strategically secure western Iraq.

He stressed that northeastern Syria is a strategic region for Washington, as it is close to Iraq, Iran, Turkey, and the Mediterranean, in addition to the presence of oil fields. There are also political reasons that make the region of interest to the US, mainly related to the impending elections in the US and securing the latter’s position in the region in case of a possible emergency security situation in the elections.

Prior to Turkey’s Operation Peace Spring, US forces had withdrawn from the east of the Euphrates. After the operation was halted by two agreements concluded by Ankara with both Washington and Moscow, Russia started, in October 2019, conducting both joint patrols with Turkish forces and solo patrols in the countryside of Raqqa, Hassakeh, and Aleppo, in accordance with the Sochi agreement that put an end to Operation Peace Spring in the eastern Euphrates.