The heads of Turkish and Syrian intelligence have held a meeting to discuss the situation in Idleb and Turkish actions in northern Syria. 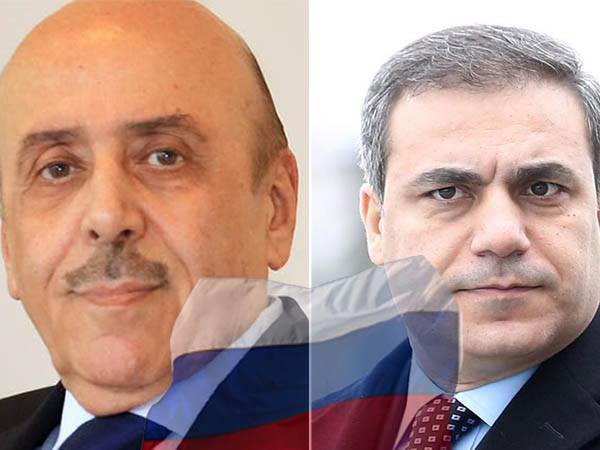 Ali Mamlouk, who has always tried to remain low key and rarely appears on the media, is playing a bigger and more highlighted public role these days.

Both sides have said there have been intelligence contacts, but this is the first explicit acknowledgement of such a senior meeting.

SANA said Syria’s intelligence chief called on Turkey to fully adhere to the sovereignty of Syria, its independence and territorial integrity as well as the immediate and full withdrawal from the whole Syrian territory.

According to SANA, Mamlouk called on the Turkish side, represented by their chief of intelligence, to adhere to “Turkey’s commitment to the Sochi agreement over Idleb dated Sept. 17, 2018, particularly in regards to evacuating the region of terrorists and heavy weaponry, in addition to opening the Aleppo-Lattakia and Aleppo-Hama highways.”

Mamlouk also, “stressed that the Syrian state is determined to go ahead in its war against terrorism, liberate the whole of Idleb and return the state’s authority to it in a way that guarantees security and stability for the Syrian citizens that are being used as human shields by terrorist organizations.”

A former Syrian diplomat told The Syrian Observer that this was not the first time that the two parties have met with Russian sponsorship, but this is the first time there has been an official announcement from the Syrian regime on its official news outlet  about the meeting and its demands.

The former diplomat noted that, “the meeting came after Putin’s meeting with Assad in Damascus early last week and after the assassination of Soleimani. It seems that it is a Russian step forwards to fill the current Iranian vacuum.”

The Iranians were aware of the meeting ahead of time as Mamlouk visited Tehran last week.

According to the former Syrian diplomat, the Iranian have always been calling for Turkey and the regime to meet and coordinate. They are ready to be pragmatic and agree to sacrifice part of their gains In Syria, if it leads to some consensus between Turkey and Syria at the expense of American interests in the region in general and the American presence in Syria in particular, he added.

The former diplomat said that if the Syrian regime offers reassurances to Turkey, with Russian and Iranian support or guarantee, to solve the problem of the PKK then Turkey is ready to accept the regime there, and this will weaken or affect the American presence without implying that they will withdraw.

The Russian media and research centers put forward various forms to solve problems between Turkey and Syria, such as amending the agreement signed by the two countries in 1998, which allows Turkey to enter the Syrian territories to combat terrorism.

When Ali Mamlouk met representatives of Arab tribes in the Hassakeh last month, he asked them to withdraw the Arab soldiers from the Syrian Democratic Forces and told them that the Kurds have no right to speak on behalf of the Arabs in any talks with the regime.

Russia, the former diplomat concluded, wants to take advantage of the circumstance that Iran is going through to enhance its presence and find a solution appropriate to its policy for the Syrian crisis. This indicates that Assad has no ability to reject Russian orders when Russia is serious about what it requests.