A photo of a young girl in the al-Rahma camp has gone viral around the world, but the original author of the photo has not received any credit reports Zaman Al Wasl. 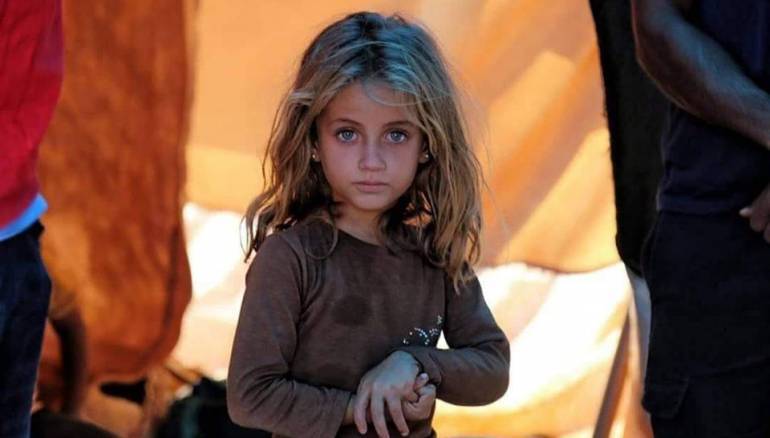 War, with all its cruelty and ugliness, could not steal the beauty, innocence and wonder of the six-year-old girl, Sana’a, despite suffering a life of poverty and asylum. Photos of her spread on social media and featured in the world’s leading magazines and newspapers. However, the picture was attributed to a British journalist after the name of its original owner, Ahmed al-Ahmad, was omitted.

The local photojournalist told Zaman Al-Wasl that he took the photo of Sana’a on Jul. 23, 2019, in the al-Rahma camp, north of Kali town in Idleb’s countryside, during a photo tour there. He then posted it on his Instagram, Twitter and Facebook accounts, and it was later shared by his fans on their pages.

The photo captured the world’s attention when it spread across the internet and shed the light on the ongoing offensive by the Syrian regime and Russia, which has displaced more than 900,000 people since April, and who now live in camps and in the open air under olive trees .

Ahmad said that he was surprised when, in less than a week, the photo was spread on all sites and pages, with credit going to a British journalist. The published photo was enlarged and the name of the original photographer deliberately cut.

Three years ago, another photo of Ahmad’s became famous. It was taken during the bombing of the city of Atareb in the western Aleppo countryside. It was circulated by British newspapers for a week. The picture shows a suffering of a girl, Maya, who used two metal cans on her amputated feet to walk.

Regime and Russian airstrikes and shelling since late April have killed more than 860 civilians, according to the Syrian Observatory for Human Rights.

More than 1,400 insurgents and over 1,200 pro-regime fighters have been killed since April, according to the activist group.