Major General Maher al-Assad, brother of the president, is agitated by the investigations that have targeted some of his closest allies writes Al-Modon. 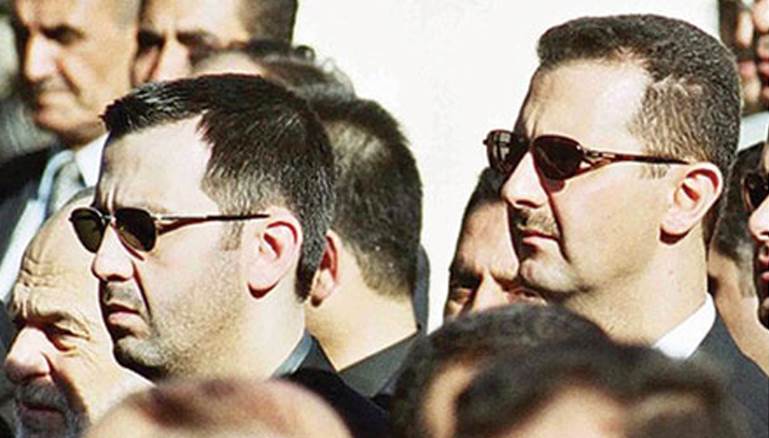 The commander of the Fourth Division, Major General Maher al-Assad—the brother of Bashar al-Assad—has recently expressed his clear annoyance at what he considers to be an attempt to curtail him, according to Al-Modon’s sources.

The sources said that Major General Assad, one of the most powerful figures in Syria, had expressed anger recently at what had happened in terms of the prosecution of his office manager, Brigadier General Ghassan Bilal, and the businessman Naeem al-Jarah.

Bilal, who is Assad’s right hand and responsible for the Fourth Division Security Bureau, is one of the most prominent “contractors” carrying out profitable enterprises connected to the war economy, such as clearing rubble, resorting and selling the materials, and securing transport lines and controlling drug supply networks.

After freezing him and limiting his powers, Russians began to investigate Bilal through the Republican Palace Security Bureau in matters related to producing and trafficking drugs, in what is believed to be part of the Russian-Iranian dispute. The Fourth Division is generally considered to be more inclined toward the Iranians, and is responsible for crimes of sectarian cleansing against the opposition across Syria, and includes sectarian Shia fighting groups among its ranks.

The issue does not stop there. The businessman Naeem al-Jarah, one of the financial faces of Assad’s investments, has also been subjected to pressure from the Russians through the Republican Palace Security Bureau. Bilal’s issue is connected to Jarah through a factory in the al-Mohamidiyeh area on the outskirts of eastern Ghouta that manufactures drugs. The Russian investigations proved that the Fourth Division Security Bureau’s involvement in transporting the primary materials for the manufacturing of drugs to the factory, which is owned by Jarah, by way of Damascus International Airport.

Major General Maher al-Assad, according to Al-Modon’s sources, has asked the Russians to withdraw all the Fourth Division forces previously sent to the Hama countryside to replace the Fifth Corps and Tiger Forces, after the latter stumbled in their battle against the opposition. Assad withdrew his previous approval for the Fourth Division forces to assist regime forces in this fighting, which explains the major confusion among the regime forces on this front.

Al-Modon’s sources said that General Assad had issued open and clear instructions in which he informed the Syrian presidency that all of his financial institutions would refrain from supporting the Syrian pound. It seems that this was one of the reasons behind the recent collapse of the pound’s value, which reached 600 pounds to the dollar.

General Assad issued instructions—according to Al-Modon’s sources—to the “economic” entities under his command, including exchange and transfer companies, as well as import and export, steel and communications companies, not to deposit any dollars in Syrian banks—especially the Central Bank.

Assad recently stated clearly during a meeting with his traders that he, “as an economic official in Syria before a military one, would not allow the injection of foreign currency or its circulation in markets during this period, and therefore there would be demand for foreign currency and the pound would witness a major deterioration,” according to Al-Modon’s sources.

The source said that Maher al-Assad had previously been supporting the Central Bank and private banks by depositing large amounts of dollars and circulating them, and that he had been selling the Central Bank certain amounts of dollars at below-market rates as a form of “support for the pound,” and that he had intervened more than once to stop the decline of the pound with the millions of dollars he released into the market without any official statement about its sources.

It appears that Maher al-Assad considers Russian pressure on his economic and security assistants to be a personal curtailment of him, and therefore he has decided to respond directly, in his own manner, and to freeze “some” of his economic activities that supported the regime and to stop military cooperation on the Hama front.