Sanamayn holds a unique position in southern Syria, as it was one of the first cities to agree to reconciliations with the regime, but recent events have increased tensions in the area writes Alsouria Net. 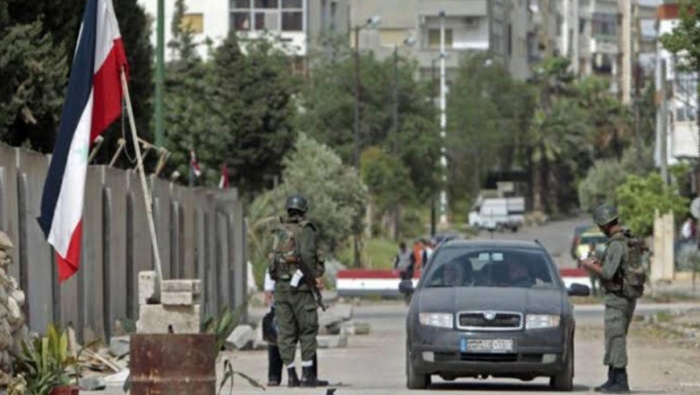 The city of Sanamayn in the northern Daraa countryside has entered its fifth day of a siege imposed by Assad’s forces, which has prevented the entry and exit of civilians and foodstuffs entirely, with the exception of only allowing university students to leave. The siege has become complementary to the clashes witnessed by the city over the past few days, which have killed and wounded a number of regime forces and civilians.

A patrol by the Criminal Security center on Sunday raided a district to arrest a number of “wanted” people, most prominently Agheed al-Zahara, a former rebel commander, who had joined a “settlement agreement” with regime forces with a group of his fighters and had maintained his presence inside the city with small arms.

Regime forces were met with armed resistance, which it appears they had not expected, and which killed one of their fighters and wounded others, including Colonel Omar Jumaa, head of the Criminal Security branch in the city. The clash ended with just three “wanted” people being arrested.

The failure of the siege operation and regulation of the relationship with “settlement fighters” has pushed the latter to take up arms and impose a siege on the city and draw a security circle around the area. A number of former reconciliation committee members said that the siege would not be broken until all wanted people in the city were handed over and an inspection process was carried out on small arms—a condition contradicting the settlement agreement.

Representatives for residents have begun efforts to try to resolve the situation and to mediate with regime forces to break the siege. Then on the fourth night of the siege, the city witnessed a night attack carried out by “unknown men” of the Criminal Security center, which left no fighters dead or wounded, but filled the city of indiscriminate gunfire that killed a civilian.

The mystery surrounding this attack has pushed all parties to explain it in different ways. The regime considers it an escalation by militants, while others doubted this and considered what happened to have been fabricated by the regime to create pretexts to carry out a military and security operation inside the city.

Meanwhile pro-revolution and opponents of the settlement agreement said that what happened was a reaction by rebels to the siege of the city. The Daraa Governorate council only issued a statement in which it called on the international community and human rights groups to work to break the siege.

The settlement deal underway in Sanamayn is not part of the agreement that was concluded in most cities and towns in southern Syria in July last year. Sanamayn was the first city in Daraa province to conclude a separate agreement with regime forces more than four years ago, allowing small rebel groups to take control over the city while the regime only took control over military bases and the security square in the city’s environs.

Throughout these years, the city has seen a number of violations, but they have always been quickly resolved—even to the extent that those who settled with the regime have been accused of treachery, following their normalization of relations between them and the regime and their repeated refusal to get involved in battles, which rebel groups faced in areas near Sanamayn. These included Zahara and his group who were part of the recent escalation of events.

A source following the events in the city told Alsouria Net that what was happening was part of plans developed by the regime to create excuses to raid the city and to strip fighters there of their weapons, and put an end to some former commanders who were part of the history of the regime’s agreements with the city itself.

Sanamayn is still an exceptional and special case in the southern Syrian rebellion’s scene. It is not a fully liberated city, nor is it fully under regime control. The groups there are not fully revolutionary but they cannot be considered to be supporting the regime.

The same source believed that the regime had chosen the Criminal Security as the agency to carry out the arrests of commanders with the aim of showing that the arrests were due to criminal activities and not related to security or political issues, which are crimes that would not end the settlements.

The number in the patrol which arrested the wanted people—which did not exceed ten fighters—raises a number of question marks. It is certain that the regime knew that this sort of arrest needed higher numbers and equipment, which made this look like it was a sort of trap to lure wanted people into lessening their numbers and clashes with them. The presence of the head of the center, who was later wounded, as part of the patrol, raises another question mark which cannot be explained except to say that the regime wanted him to be there and get wounded, as evidence that one of its officers was wounded in the fighting.

Sanamayn can be considered the weakest link in Daraa. It is not the eastern Daraa countryside, which is governed by the relation between the regime and the Fifth Corps, and it is not the western Daraa countryside, which is overflowing with weapons, which makes the regime hesitant to enter there to avoid clashes with its cities and towns out of fear of developments growing out of control.

The regime sees Sanamayn as the weakest link, and teaching it a lessons could send a message to its neighbors. Therefore what happens here will be observed and anticipated with interest by most people and forces in Daraa province and not just Sanamayn, as scenarios which ignite the scene in other parts of southern Syria are still fully possible.