In protest of Canada’s actions regarding his desire to settle, Ammar al-Sheikh Haidar has gone on hunger strike in front of the Canadian consulate in Istanbul reports Zaman Al Wasl. 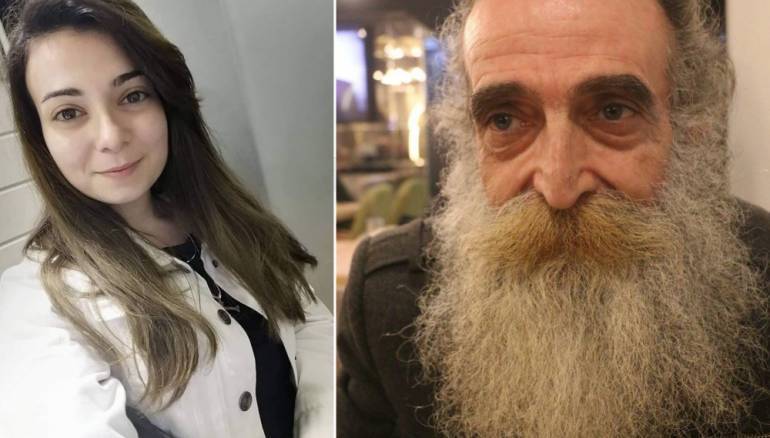 On Monday, Ammar al-Sheikh Haidar, a former detainee and political dissident, decided to go on a silent hunger strike in front of the Canadian consulate in Istanbul to protest against the freezing of his settlement file.

“I am no more than a burden on this earth and there is no point in my existence, except for my daughter,” Haidar wrote on his Facebook page. “I decided to refrain from talking and to go on an open hunger strike.”

Haidar told Zaman al-Wasl that he lost everything and that he now lives with the help of some friends, adding that he only owns his mobile phone, the clothes on his back and his refugee status. He decided, therefore, that he should not stand idly by and surrender to his reality. He had several options, the most rational of which was a hunger strike and a sit-in in front of the Canadian consulate in Istanbul.

Ammar al-Sheikh Haidar, originally from Misyaf, worked in construction before the war. His brother, Ali Haidar, the Minister of National Reconciliation in the regime government, was arrested in May 2010 and three months after his arrest, his family moved to Jordan. In 2011, he was released from detention but did not want his family to return to the city, to spare them from harassment, especially since – he says – he had declared his support for the revolution after it broke out.

In 2014, he was abducted and tortured by Hezbollah in Dummar al Balad in Damascus. After his release, one month later, he grasped the impossibility of living in Syria, so he moved to Lebanon, where the situation was not any better, which drove him travel to Turkey. Haidar had not been able to bring his family along because of his lack of stability and lack of financial means, and he could not travel to Jordan, because of the requirement of air travel set after 2011.

In 2015, he tried more than once, like thousands of Syrians, to immigrate to Europe illegally so that he could reunite his family, but his attempts failed. Unable to save enough to pay for the sea crossing, he traveled by land. Despite reaching the border, Haidar made four attempts to immigrate, but was sent back to Turkey by Greek police three times, with the Turkish gendarmerie thwarting his fourth attempt before he managed to cross the border. After that, he became desperate and resorted to smugglers, preferring to cross the sea as a ferryman to save the cost of the trip to reach Izmir despite the gravity and the legal consequences of such a choice; however, once again, his attempt did not succeed.

At the end of 2017, Haidar submitted his wife’s and daughter’s files to the Canadian Immigration Ministry with the help of a Syrian woman called Saba Khadour. The file was rejected the first time because his daughter Marwa was over 18 years old and so her file was submitted again separately.

Marwa Haidar explained that the suffering of her family began after her father was arrested for his political activity in mid-2010. At the time, she was taking the second year secondary exam and after her exams she travelled to Jordan, where she still lives with her mother. She completed the baccalaureate and enrolled in al-Ahliyya University, Graphic Department. However, after her third year, she was unable to complete her studies because of the high tuition fees. She had to withdraw her papers from the university and to work as a receptionist at a sports club in the Jordanian city of Irbid.

Marwa expressed fears for her father’s situation, whom she had not seen for 10 years, and his decision to go on hunger strike, hoping that he would be heard as soon as possible and for her family to be reunited.