Zaman Al Wasl tells us of a success story in a Arsal refugee camp, a woman who with sheer hard work managed to establish her own clothing factory 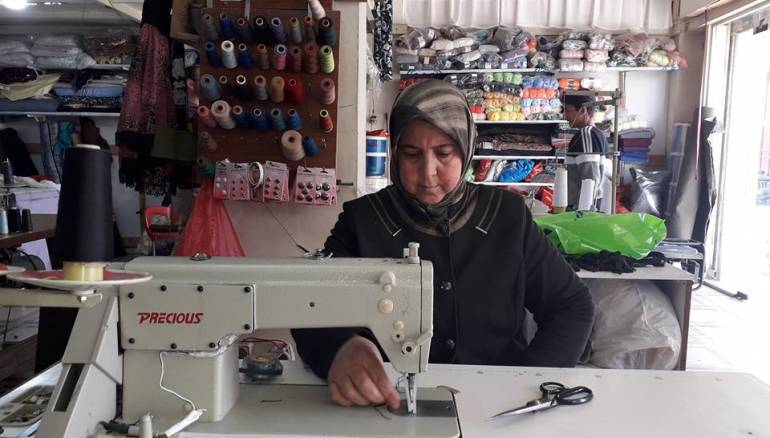 In the border town of Arsal, behind a Syrian factory that specializes in sewing and fashion design named “Orchid Flower,” stands Souad Kassem Shehada, a refugee from the Homs countryside.

The factory is the culmination of a long period of hard work, made more difficult by the challenges of asylum and alienation.

“I could not take any of my sewing tools when we were displaced from my hometown in Qusayr in 2013,” Souad ‘Um Mohammad’ told Zaman al-Wasl’s correspondent in the Arsal refugee camps.

“I started sewing in this town with a butterfly sewing machine that I borrowed from a Lebanese family, and from a small room that was designed to be a water pump room I started my work, which was limited to repairing worn-out suits and dresses,” she said.

After a year and a half of work, “I was able to save enough money to buy an electric sewing machine and moved my work to the main town square where I began to develop my work and to design evening and wedding gowns,” she adds.

The fame of Um Mohammad and her skill and mastery of her work opened the opportunity for her to be selected as a sewing teacher by an NGO named MAPs and to teach those wishing to master this craft in the camps of Arsal.

Her project, that she aspires to turn into a house of fashion design in the future, faces many obstacles with the absence of supporting institutions. The most important of these obstacles, she adds, is the factory’s lack of many important machines such as an embroidery machine, a riveting machine, threading and button fitting machines, as well as the lack of steam ironing and electric scissors, in addition to the cost of the monthly rent of about $400.

The Orchid Flower factory, which was the result of over six years of hard labour and effort since the refugee’s arrival in Lebanon, is another achievement added to what Syrian women have offered in the refugee camps. It is a sign of success that confirms to the world that the tents are capable of producing successful innovators who confront the harshness of the conditions of asylum through challenge and success.