Following a meeting between Russia, the regime and representatives from al-Rukban, families have started to leave, although the fate that awaits them is unclear writes Al-Modon. 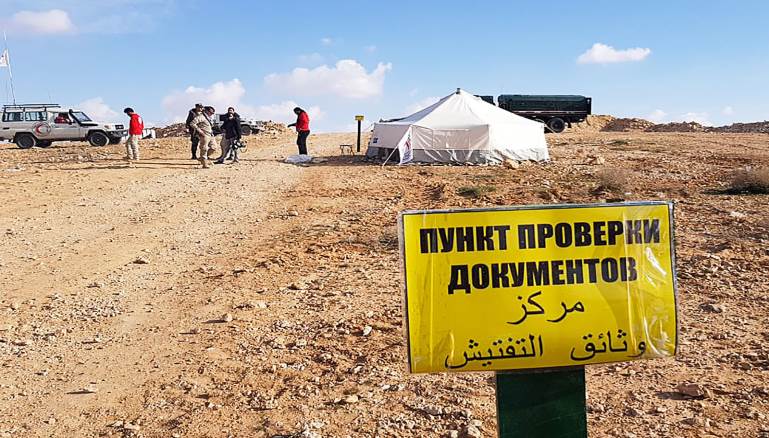 The operation to evacuate residents of the al-Rukban camp has begun under Russian supervision, days after a meeting was held under the title, “Settling the al-Rukban Camp and Evacuating its Residents” on Apr. 2, 2019,  organized by the Russian Reconciliations Center and attended by various parties at the Jleighem “humanitarian” crossing on the camp’s outskirts on the regime side.

On Wednesday, dozens of families departed the camp and headed to regime areas, in coordination with the Russians. This was the third official batch to have left since the Russians announced the opening of “humanitarian corridors”. Activists say that 100 families have left the camp so far. A source from inside the camp’s civil administration told Al-Modon that the latest batch had left but did not confirm the numbers.

The latest batch was preceded by two batches, with a thousand in each. The first batch deparated two days after the meeting, while the second left on Sunday, according to a source from the camp administration.

There was also representatiion by the United Nations High Commissioner for Refugees, and a representative for the UN Coordination Office in Damascus, as well as the Syrian Red Crescent and a number of notables from the al-Rukban camp and previous returnees from the camp.

Officially, the batch that left the camp on the “green buses” was the first organized operation to evacuate the camp of its residents since it was established four years ago. The departures had been arranged through individual settlements and the payment of bribes to regime officers at the checkpoints around the camp.

These batches of returning displaced people were transported to the Mohamed Osman Shelter Center for Temporary Residence in the Homs countryside, which is used as a center to collect displaced people. “Status settlements” are carried out in the Palmyra desert branch inside the al-Tayfour airbase in the al-Oras area in Homs, as had happened with the batches that left before the coordination with the Russians began.

A source from the camp’s civilian administration who attended the meeting with the Russians as a representative told Al-Modon: “The Russians gave those who had not performed military service or defectors a six month deadline to join, and allowed those who wanted to return to their cities in regime-held areas to return to shelter centers and then settle their statuses there.” He said that there were no guarantees for those wishing to leave.

According to the source, “a second option was proposed in the meeting, which was submitting lists of names of those who want to return to the ‘reconciliation centers’ for a security inspection. If the Russians approve them, they are allowed to return to their cities without any need to enter the shelter centers.” This process takes a month, from the submission of the names and their consideration until the response.

The source added: “For those who are wanted, the second option is a new challenge, given that there is no option to leave for northern Syria.” He said that the names on the list that are rejected are prohibited from entering regime areas, according to what was discussed at the meeting.

The Liwa Shuhada al-Qaryatayn group has previously held talks with the regime to transfer a batch of its fighters and displaced people from the al-Rukban camp to the Euphrates Shield areas, but without result. If the deal fails, those on the settlement lists who are rejected will arrive at a block road.

Despite calls from the camp’s residents for the United Nations and the international community to intervene and stop the camp from being dismantled, or for its residents instead to be transferred to opposition-held areas in northern Syria, this has not happened. Residents fear vengeance will be taken against them, especially those who defected from regime forces or those who participated in the revolt against them.

A civilian source in the camp told Al-Modon: “Every type of direct and indirect pressure has been put on us to leave. With the hope of us getting to northern Syria dissipating and the pressure on us, people have started to think of leaving [to regime areas].”

A civilian source in al-Rukban told Al-Modon: “Those leaving don’t know what the guarantees are or the role of the guarantor, because the latest batches, in agreement with the Russians, left a week ago and we haven’t heard any news or how the regime treated them.”

But according to the source, the most important change pushing camp residents to leave—apart from the blockade—is that the Russian project to evacuate the camp has tied the hands of the “individual settlement” godfathers from among the regime officers. The source told Al-Modon: “Over the last few months there have been individual settlements where a person pays 100,000 Syrian pounds (200 dollars) for transport and settlement with the regime. Since the Russians took over al-Rukban, the price of a person leaving is no more than 10,000 Syrian pounds (20 dollars), which is the price of transport from the camp to the crossing point.”

Since the Russians announced the opening of the humanitarian crossings in February, pressure has been put on camp residents, most importantly restrictions on bringing in basic food and medical goods into the camp. A source told Al-Modon: “The situation is going from bad to worse … the price of a kilogram of vegetables like tomatoes and onions and others is 700 pounds. We’re suffering from a lack of basic goods like flour and sugar.”

In light of the al-Rukban camp not being declared as an official UN camps and the absence of aid and the regional and international pressure to dismantle the camp, which has about 60,000 residents, the source said: “People prefer returning to the unknown of regime areas, rather than the hunger that awaits them and their children and wives in the camp.”