The formation of the Consitutional Committee has long been a sticking point between the US and Russia writes Asharq al-Awsat. 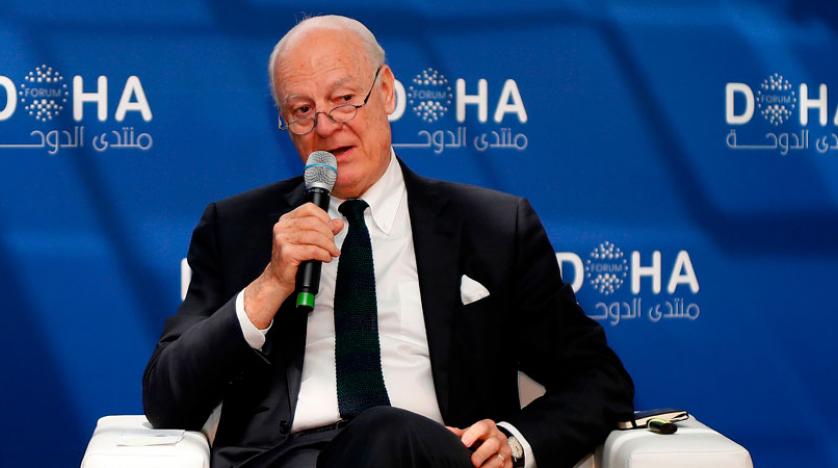 The UN Special Envoy to Syria, Staffan de Mistura, met in Geneva with assistant Russian, Turkish and Iranian foreign ministers to receive the list from the three “guarantor” countries for the Syrian Constitutional Committee, while Russia’s Sergei Lavrov, Turkey’s Mevlut Cavusoglu, and Iran’s Mohammad Javad Zarif held a meeting on Tuesday morning to announce the formation of the Constitutional Committee.

The US Envoy to Syria, James Jeffrey, is also holding a meeting with his counterparts in the Small Group to decide how to deal with the “tripartite Russia-led political attack.”

The main aim of the “tripartite attack” is to hinder American attempts to end the Sochi-Astana process, and resist Washington’s advice to the new UN Special Envoy to Syria, Gair Pedersen, to find new ways into the political process apart from the constitutional committee, whose process was begun at the Syrian National Dialogue Conference in Sochi at the start of the year, according to Western diplomatic sources.

Mistura had supported the Sochi conference and formed a list of 50 names of civil society, independents and women, and delivered the lists to the Syrian government and the opposition, who each have their own list of 50 names. However Damascus, Moscow, Tehran and Ankara rejected Mistura’s list or any role for the United Nations in forming the Constitutional Committee, as it was a “sovereign” issue—although they did accept that there was a role as “facilitator” for Mistura, which will allow him to participate in consultations between the three guarantors and the Syrian government to form the Committee.

Damascus also insisted on a two-thirds majority and the chairmanship of amendments to the 2012 Constitution in accordance with mechanisms of the current constitution—that is, with President Bashar al-Assad’s signature, and through the Constitutional Committee in the current parliament.

Here, Washington took a path of escalation accompanied by the international envoy, represented in six points. First, an agenda was developed to form the committee under the supervision of the United Nations; second, Moscow was accused of backing down from the understandings between Lavrov and Guterres that had resulted in Mistura’s participation in the Sochi conference; third, Damascus was blamed for the non-formation of the Constitutional Committee; fourth, it was suggested that international legitimacy would not be given to any committee that was not composed in accordance with Geneva and its mechanisms; fifth, the reference to ending the Sochi-Astana process; sixth, the advice to the new Special Envoy to look for new entries into the political process in Geneva to implement Resolution 2254.

Within this context, Moscow gave an “indication” to Washington that after the Small Group meeting in the American capital, they should wait and give the three guarantors a chance. after Washington and Mistura had announced disappointment at the failure of the latest Astana meeting and spoke about the process reaching a “dead end.”

Coinciding with the extension of the Russian-Turkish understandings around Idleb, Ankara’s influence in northern Syria, and the Turkish army hinting at an operation against Washington’s allies east of the Euphrates rivers, and Cavusoglu’s statement about accepting to work with Assad if he won in elections, the Russian diplomatic wheel began to turn with the visit of the Russian Presidential Envoy, Alexander Lavrentiev, to Ankara and Damascus to reach an agreement on the list for the committee. According to Al-Sharq Al-Awsat’s information, all names and figures who had participated in the second process around constitutional options were removed and a list was developed with figures who are loyal to Damascus and who are working in government institutions. It was reported that the guarantors had agreed to a formula of 18 for the government, 12 for the opposition, and 10 “independents” to balance the weights of official decision-making in forming the new constitution.

By delivering the list to Mistura, Moscow and its allies hope to “throw the ball into the court of the UN and Washington” by entering into the details of the committee’s working mechanism, its references, voting system and presidency, while leaving these issues to the new envoy so that he does not leave the Sochi-Astana track and so Washington does not search for new entries and Mistura does not accuse Damascus of impeding the process in his briefing to the Security Council on Dec. 20, 2018—and also does not accuse President Vladimir Putin of not abiding by his commitments made in the statement following the Russian-Turkish-French-German summit in Istanbul at the end of October.

The “tripartite attack” give Guterres two options: Either accept the proposal while developing reasonable conditions to improve them or angering Moscow by siding with Washington. Washington must either reluctantly accept or escalate and look for political alternatives concerning Moscow and Ankara. It also give the opposition Syrian Negotiations Committee the choices of accepting the new political roof or splitting between supporters of Ankara and the opposition.