Syrian businessman Firas Tlass has lashed out at the US and their lack of planning and strategy in Syria writes Ana Press. 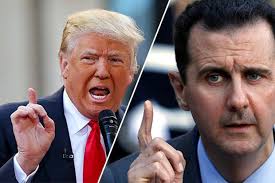 The American position towards Syria becomes more ambiguous as each day passes and the evasions which have contributed to prolonging the Syrian war, to the benefit of some parties and basic players, are increasing.

Contradictory and confusing American statements continue, with Washington describing the Syrian regime president as a “war criminal” and a “shame on humanity” and then saying they have no intention to change this regime.

The American Special Envoy for Syrian affairs, James Jeffrey, in an interview with Russia’s Novosti news agency and the Kommersant newspaper, said, “We consider him [Assad] a disgrace to mankind. He is a brutal war criminal — probably the biggest and most brutal war criminal in the world today. America will never have good relations with Bashar al-Assad — nonetheless, we are committed to a political process that is for and by the Syrian people.”

He said that his country did not aim to change the regime or the leadership in Damascus, saying, “The Syrian people get to decide who will lead them and what kind of a government they will have.”

Jeffrey had previously said that Washington did not consider removing Assad from power to be an aim, but that it saw his presence as an obstacle to stability in the country, and called for him to leave during the expected Syrian political process.

The opposition Syrian businessman Firas Tlass said, “Honestly, I haven’t trusted the Americans for a day, and I have never relied on their statements about the Syrian revolution. The previous administration called for Assad to go and claimed that in a few days things will end in Syria.”

Tlass told Ana Press, “The United States has a particular agenda in Syria, which has become clear. We are part of a larger field for them in the Middle East. It wants Syria to be a workshop for the demolition of the entire area.”

He continued, saying, “Every time I hear about the American and Israeli desire to get Iran out of Syria, I laugh at their laughter at us, and I cry at our fate … All the talk about getting Iran out is nonsense and idle words. Iran is staying in Syria. It won’t leave, and America and Israel know that.”

For his part, the head of the Council of Free Syrians, Osama Bashir, said, “From the start of the revolution, Washington has been saying that Assad has lost his legitimacy and then they deal with him secretly… If we look at all the stages of the revolution on the field and politically, we can see that America has preserved Assad.”

Bashir told Ana Press, “There’s no point to Washington confiscating chemical weapons and leaving behind those who used them, while they brought down Saddam Hussein’s regime just because of the suspicion of chemical weapons. Even when Assad used them again, it was ridiculous — they shot a few rockets at the Shairat airbase.”

Bashir said that these American statements were more of the same. They had already described him clearly, and know well what type of leader he is, however, they also see him as being appropriate to their needs.

“We will not forget that America is the one that prevented the rebels from being armed with air defenses. If the rebels had air defenses, they could have brought down the regime and defeated Russia. Washington cannot claim it is with the people and with the opposition. These statements that Assad is a disgrace to humanity are for consumption. The political decision has not changed at all, and they will not bring down Assad, even if he uses chemical weapons dozens of times, since the green light has been given to him by the Americans since the start of the revolution,” Bashir said.