Raed al-Faris was a prominent activist who founded Fresh Radio and was well known for the posters that he produced writes The Syrian Observer. 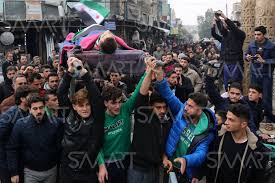 A calm winter night was shattered by the sound of bullets in the eastern district of the city Kafranbel in the southern Idleb countryside.

Minutes later, the shocking news spread among residents, “They killed Raed … they killed Raed and Hammoud.” Two hours later, the activist Raed al-Faris, who had been known as “Kafranbel’s poster engineer” and the founder of Fresh Radio along with his friend Hammoud Janeed, known as the “barrel bombs photographer,” were buried in the cemetery of Kafranbel’s martyrs.

Raed al-Faris was born in 1972 in the city of Kafranbel, which is about 35 kilometers south of the center of Idleb province. When he turned 18, he finished high school and started studying medicine at Aleppo University, before leaving his studies and heading to work in Lebanon, which was common for the residents of Kafranbel.

In the mid-1990s, while moving between the city he loved and Lebanon where he worked, he married and fathered three children. He later settled in Kafranbel, where he worked in the real estate sector, conducting transactions.

When the Syrian revolution began in 2011, he was among the first young men in his city to organize peaceful protests, while the regime was still present in Idleb’s cities, including a base in the center of Kafranbel.

Raed al-Faris along with a number of his friends kept away from Kafranbel in 2011 and took the village of Jabla and the surrounding villages, near Kafranbel—which were relatively far from grip of regime security agencies—as a place in which they could spend most days of the week, preparing for the protests which were limited to Friday at that time, until Kafranbel finally fell outside Syrian regime control in the second half of 2012.

Kafranbel began to appear at one of the most important cities in Syria, distinguished by its organized protests, and began to appear as the civilian face of the revolution in Syria, with its posters for which Raed al-Faris was one of the most important minds. The posters were circulated by many Syrian activists opposed to Bashar al-Assad’s regime and became famous in Western media because some of them directed messages towards the international community in English.

Faris attracted the young men of his area and others from Idleb and other Syrian cities to contribute work to Fresh Radio, which he established in Kafranbel, as well as other activities for which he became prominent. He was known for pushing forward the civilian face of the Syrian revolution at a time when the influence of radical groups was growing in Idleb at the end of 2013 and the beginning of the following year—most infamously the al-Nusra Front and the Islamic State (ISIS), which saw the activities of Faris and his friends as a threat to their influence.

As a result of his open and aggressive opposition to extremist groups, Faris was arrested by these groups and was also subjected to an assassination attempt in 2014, which he survived after being severely wounded by a bullet to the chest.

When ISIS’s influence in Idleb ended in 2014 and while the whole province was subjected to near-daily regime aerial bombardment, with repeated massacres occurring, al-Nusra Front harassed and pursued Faris and a number of his friends, with the last arrest he was subjected to occurring in 2016, along with the Syrian activist Hadi al-Abdullah, when al-Nusra stormed the Fresh Radio headquarters in Kafranbel.

According to eyewitness accounts and some of his close friends, Faris and his friend Hammoud Janeed were living semi-permanently with others in a building in the eastern district of Kafranbel. The building, which in addition to hosting Fresh Radio, also included the Revolutionary Offices Federation, headed by Faris, and the al-Mantara magazine and the “Aish Campaign” (“Live Campaign”) for writing wall murals, and a center for a number of other rights activities and for recreational and educational activities for children.

On Friday afternoon, Nov. 23, 2018, Raed al-Faris left this building with the photographers Hammoud Janeed and Ali Dandoush in a car. Faris was driving and Hammoud sat beside him in the passenger seat, while Dandoush was sitting in back. The three noticed that a silver van was following them.

Raed took the car onto a dirt road in an attempt to mislead the van by taking a road further away from his original destination. The van monitored them from the corner of the road, which they followed east of Kafranbel, and then blocked off the road, before four masked gunmen opened fire with machine guns, emptying their chambers in under a minute and fleeing the area.

Residents who heard the sound of the bullets ran toward the car to find that Janeed had been killed instantly. He had been known as the “barrel bomb photographer” for his bravery in rushing to the scenes where regime helicopters had dropped barrel bombs and photographing the scene from up close as well as the victims of the bombardments.

Janeed’s body was removed and Faris was brought to the Kafranbel hospital, where he breathed his final breaths, after being wounded by a number of bullets including some close to his heart. He died as doctors tried to save his life by transferring blood to his body to make up for the huge amount that he lost from his wounds.

Dandoush survived the attack. He had been sitting in the rear seat of the car, where he lowered his head and hunched into a ball to protect himself from the bullets which were flying toward the car.

Mohamed al-Salloum, a friend of Raed al-Faris, told the newspaper al-Araby al-Jadeed in over the past three days Raed had been very cautious in his movements—more so than before—and that he had planned to travel to Turkey on Saturday.

Raed died before he could leave. On Friday evening, about two hours after the attack, hundreds of residents and friends of Raed and Hammoud carried their bodies from the Kafranbel hospital to their main mosque, and from there to the eastern district cemetery in Kafranbel, from which Raed had refused to depart, and insisted on staying, despite knowing the dangers, and knowing that they could end his life at any moment.