It is not uncommon to find two or three families sharing a 12-meter area, or a woman that may not have had a bath in a month 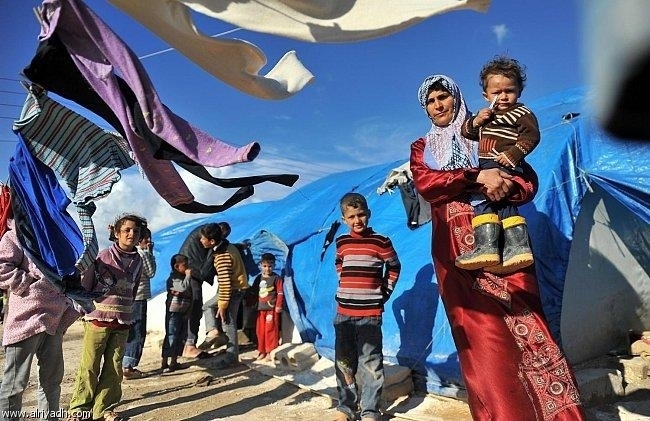 "Dwelling in cemeteries is thousands of times better than dwelling inside graves, brother," says Um Ahmad, who recently arrived in Baalbek’s Galilee camp after the destruction of her home and her inability to live inside or in the neighborhood of the al-Yarmouk camp, so she sought a refuge in this one. Because of the overflow in the camp, the People's Committees had no chance to provide the displaced people with shelter, so they benefited from the wall surrounding the cemetery and used it to construct hastily-built rooms inside the cemetery of the camp. The camp is overcrowded with its six hundred and fifty families scattered in the neighborhood, especially because one of the main buildings (inhabited by one hundred and fifty families) is dilapidated. The one-year-old crisis in Syrian camps resulted in the displacement of more than 1507 families who arrived in the Galilee camp, which obliged the People's Committees to announce a state of maximum emergency firstly to provide shelter and secondly to provide first aid until the situation became more stable.

In the camp, it is not uncommon to find two or three families sharing a 12-meter area, or a woman that may not have had a bath in a month, and the greatest offer a neighbor can make is to "invite her to have a bath". It isn’t strange to find "mange" cases and lice spread among some families. Social aid director Samira al-Ghoul found herself forced to raise the alarm among cooperative international commissions to stop social and hygienic bleeding cases but the response remains less than what is needed.

In the yard of the camp, and in front of UNRWA offices, a donator brought a calf to distribute its meat among the displaced families (each family's share was one kilogram and the total number of families was 259 families). Minutes after he had started distribution, the number of people gathered around him became so huge that he was forced to stop the campaign, and he consequently received several insults because he couldn’t give some to everybody. Later, the man sent the available shares to families' houses.

"Between five and ten families arrive daily; it depends on security tensions," reveals Omar Qasem, head of the People's Committees. "The number of refugees that arrived in the camp last week exceeded 8000 people (consisting of 1507 families),mostly from Damascus and the surrounding camps," adds Qasem, and considers that "providing shelter is the main problem because of the shortage of space and the high rents of rooms, if there are any available, as the rent of one room (with its bath) exceeds $200. Who can pay this amount?"

Qasem considers the aid provided by international commissions, humanitarian organizations, people's committees, Palestinian factions and the Palestine Liberation Organization not to be sufficient for even ten days monthly, not to mention the manipulation involved, especially when the contracts are with some commercial institutions which increase refugees' humiliation by forcing them to consume specific kinds of goods. Hence, we find hundreds of poverty cases.

It was noticed that enormous numbers of students left schools (70%) because of the timing of migration, differences in programs, parents' inability to afford studying costs and their tendency to make their children work despite their young age if an opportunity presented itself. For example, 250 students entered UNRWA primary schools, while the number of high school students didn’t exceed the number of fingers on one hand.

As a result of overcrowding, lack of work opportunity and the absence of entertainment means for children, in addition to daily life stress, some troubles began to occur in Galilee camp, especially when the discrimination between "Palestinian-Syrian" and "Palestinian-Lebanese" popped up in some cases. But the People's Committees solved these issues through more meetings and seminars.

The People's Committees were able to provide shelter for 140 families in a center called "swimming pool" beside the camp on a piece of land that belongs to the PLO. Houses are part of a hangar, divided to shelter as many people as possible. Kitchens and baths were also constructed. Beside the "swimming pool hangars", some rooms were constructed inside the cemetery.

Providence saved Um Ramez when she tried to check the water temperature in the barrel above her wooden bathroom. The barrel was connected directly to two electricity cables and she barely survived a shock. The bathroom itself is one square meter in size and it is made of wood timbers while the door is just a piece of cloth, so any breeze can move it. Her family and her husband's brother’s family were obliged to "make" the bathroom because they refused to go to a bath located fifty meters away from their room and used by 16 families. Nevertheless, Um Ramez thanks God because she found a shelter, even though one not suitable for humans. She knows displacement well, as this is her third one: "from Enatain Palestine to Jordan, which I left in 1970, to al-Yarmouk camp, and this is my third one".

Palestinian factions shared their offices with displaced families after As-Safir had talked in a previous report about the possibility of keeping tens of families in the offices. Secretary of the People's Committees Karem Taha declared that "more than 20 families were sheltered in the seats". The families living there are the luckiest ones because they are the first to receive aid.

Tears pour down from Um Wisam's eyes when she says: "we haven’t come here to enjoy ourselves. Our houses and properties were destroyed. We lost everything in a battle that had nothing to do with us. God saved us from bombardment and our families became homeless. We've lost contact with my son for the past three months. And today, the officer in UNRWA insulted us while we were waiting for a bed to sleep on. Isn’t it a shame?" A woman interrupts by giving her a handkerchief to wipe her tears. Um Wisam is worried about the health situation of her two sons and she suffers from a different special problem because she is Palestinian and her husband is Syrian, so the UNRWA is not concerned with her and the United Nations didn’t register her as a refugee, and today she moves between offices so she might get some help.

A tuberculosis case has been discovered among the refugees and the authorities dealt with it seriously because of the fear of infection and the patient received treatment in al-Azzouniyeh hospital.