Some opposition members in Homs accuse Alawites of pushing out dozens of families from other sects, looting their shops and selling their wares in what is now known as the “Sunni Souk” 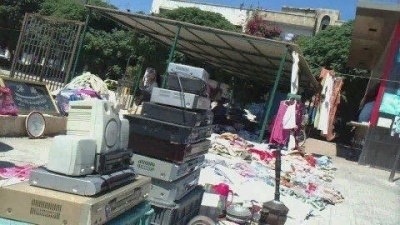 Hanan, 34, was drinking coffee over the melodies of Fairuz on a May morning this year when she heard a missile fall on her neighborhood of Akrama in Homs. Silence prevailed for a few seconds before pandemonium spread and residents began running towards the elementary school where the missile had landed. Car alarms and the fear, crying, and screaming of the residents filled the neighborhood.

Hanan, whose son Ahmad, 9, attends the school, ran to the bomb site.

A bombing in Akrama in Homs a few months ago

“I stood shocked at the horror of the sight and did not know what to do,” she said. “Dust and fear covered the faces of the children who came out, some of them covered in blood. The screaming and wailing of the mothers was deafening.

Hanan said some of the mothers tried to prevent her from going into the building out of fear that another bomb would land, but she went in anyway.

“I saw my son in the school courtyard shaking with fear,” she said. “I walked towards him and held him and kissed him fervently. I carried him towards the house thanking god that he wasn’t harmed.”

This bombing is one of many attacks that targeted the Akrama neighborhood. The latest attack was on July 9, when a car bomb exploded and killed four people and wounded dozens.

The neighborhoods of Akrama, Zahra’a, Nouzha and Assabil in Homs are considered loyal to Syrian President Bashar al-Assad’s regime since most of their residents are Alawite, along with a small number of Sunni and Christian residents. This demographic mix predates the start of the uprising, and a lot of Sunni families left these neighborhoods due to sectarian tension and the precarious security situation. This has also led some Alawite residents to leave and settle in safer areas in the Homs countryside.

These neighborhoods sit on the front line, facing the areas controlled by factions of the armed opposition, the largest of which is the Farouk Brigades. These areas have been the site of raging battles since June, led by Syrian government forces aiming to regain control over the opposition controlled areas. Residents on the government controlled side are fearful of revenge attacks following this military operation, particularly since reports pointed to several artillery barrages from Alawite-majority areas impacting in opposition controlled neighborhoods.

He adds that the opposition’s shelling of the pro-regime ares is reactionary and follows a policy based on a balance of fear.

“I am against this and I would have wished that some of the factions would not replicate the regime’s behavior,” he said. “But in the end we have to use the last option available to us that might deter the regime from bombing opposition areas. Sadly, the residents of these neighborhoods are not yet convinced that the regime does not care about them, but only about maintaining power.”

Some opposition members in Homs accuse Alawites of pushing out dozens of families from other sects, looting their shops and selling their wares in what is now known as the “Sunni Souk.” They also see these neighborhoods as detention centers for mainly Sunni opposition youth.

However, the shelling that targets areas regarded as loyal to the regime affects families from several sects, and includes children who are clearly not thugs assisting the government’s security forces.

“Dozens of locally made rockets have fallen on Akrama and Zahra’a and Nouzha on the pretext that they are loyal to the regime,” says Rabih, 25. He points to a house belonging to a Christian family in Akrama that was practically demolished after rockets landed on it.

“A whole family was killed here, a father and mother and three children,” he said. “They had no investment in this war, they were not Alawites and were not against the revolution. Their only crime was that they were born in this neighborhood.”

Hadeel, 32, a Sunni resident of the Akrama neighborhood, remembered the bombing of a school last May, and said she “hopes it never happens again.”

“Bombs do not differentiate between opposition and regime, nor between children and women, and most of their victims are women and children. Not a single soldier from either side was killed by these bombs,” she said.

She adds that she was born in this neighborhood and was married there. She does not deny her occasional fear of revenge attacks by some residents who lost their children.

“At the start of the revolution some Alawite neighbors came to us to reassure us and said that if we want to leave then it is our choice, but if we want to stay then this is our neighborhood and we are your brothers and your neighbors, and we will not let anyone harm you with even a word. We still visit each other, but we avoid talking politics.”

Abeer, 38, lives in the Zahra’a neighborhood which has also been bombed from opposition areas. An Arabic schoolteacher, Abeer moved from Bab Al-Siba’a at the beginning of the revolution because she is Alawite, despite her support of the opposition.

“This will not protect me from the retaliation and revenge from some whose brothers and relatives have been martyred,” she said.

Abeer and her family do not have enough money to leave Syria, and they cannot move into the refugee camps because all of their residents are Sunnis, according to Abeer. She is afraid of speaking of what is happening in Syria in front of other Alawites and is still in contact with some of her previous Sunni neighbors in Bab Al-Saba’a to check up on them. She sees both Sunnis and Alawites as victims of war.

“Most Alawite residents of Zahra’a are besieged just like others in the opposition areas of Homs,” she said. “We are stuck between the fire of the opposition and that of the regime.”