Unlike in previous years, this Ramadan he has been unable to afford to buy dates 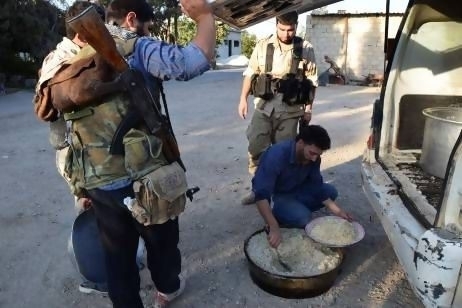 Against the backdrop of a war between rebels and regime, civilians are struggling through their third Ramadan since the uprising against president Bashar Al Assad started in March 2011.

"Most of the anti-Assad people thought this would all be over by now, that he would have stepped down or been thrown out and the new era would have begun," said a resident of the southern suburbs of Damascus.

Regime supporters similarly believed the revolt would have long-since ended, he said, but each side in the conflict has been surprised by the other's tenacity.

In upmarket central areas of Damascus, where regime forces – emboldened by their recent gains in Homs – remain firmly in control, some semblance of normality endures for the wealthy. Still, incoming rebel mortar fire and the sounds of nearby battles serve as a constant reminder that the reality of war is not far away.

A bolstered security presence, search-and-arrest sweeps by the regime, and an increased prevalence of checkpoints serve to underline how hard the authorities are working to prevent the capital from slipping into opposition hands.

"Many nights I can't sleep because the sound of fighting is so loud," said a resident of Mezzeh, an area of the capital home to regime loyalists and, in the pre-uprising days, foreign diplomatic missions – now mostly shuttered.

"There are more checkpoints than ever before, they now ask for your ID card and your mobile phone, which they then check for text messages, Facebook postings and photographs," he said.

"We have more restrictions on our movements in Damascus than before, especially at night, there is more mortar fire into regime areas."

Wealthier residents may be able to afford to pay black market prices for bread – avoiding long queues familiar to other Damascenes who need to buy it at the cheaper, subsidized rate – but they too are facing lengthy waits in line this year to get their hands on hard currency.

Syria's central bank has eased exchange controls, allowing anyone with sufficient savings to change up to US$5,000 (Dh18,365) worth of Syrian pounds for dollars – albeit at the official exchange rate, which hangs much below the unofficial market price.

Before the uprising, one US dollar traded for 50 Syrian pounds, an exchange rate that has since slipped to as low as 300 pounds.

As further weakening is widely anticipated, and security forces have warned against unofficial transactions in hard currencies, many with savings are trying to convert them into dollars.

Long queues have formed at branches of government run banks.

"From early in the morning people wait outside the banks to get their $5,000, and not everyone gets to the front of the queue by the time the banks close in the afternoon, so they miss their turn and have to try again the next day," said Abu Hamza, a member of a respected Damascus family.

In the more heavily contested districts of Damascus, and the city's suburbs where most of it population live, the fear, uncertainty and hardship is worse than ever, residents say.

Those lucky enough to still have jobs work long hours for little pay, sending unemployed family members out to search for affordable food.

"Ramadan used to be a time for me to read the Quran, pray and help people with charity but now we are fighting just to get bread, food and enough money to live ourselves," said Abu Marwan, a 50-year-old minibus driver from Zahara, a neighborhood in southern Damascus.

Zahara abuts Yarmouk, home to a large Palestinian refugee community now in rebel hands, where battles have been intense.

Unlike in previous years, this Ramadan he has been unable to afford to buy dates.

A kilogram of dates in Damascus costs SYP600, up from their pre-revolt price of SYP140, a rise that has put them beyond reach for some. Abu Marwan typically earns SYP1,000 a day – worth between Dh11 and Dh22 depending on the dramatically fluctuating exchange rate.

Visiting relatives is another tradition that has been affected by inflation and security concerns.

"I have not invited my brothers and sisters to the house for dinner because we do not have room for them to stay over at night and they cannot go home after dark," Abu Marwan said.

Fighting and creeping ethnic cleansing has separated other families.

Zyad, a 30-year-old engineer, was separated from his family when they fled the suburb of Saida Zeynab. Home to a shrine revered by Shiites, it has attracted an influx of Iraqi and Lebanese Shiite militants, fighting alongside regime forces against Sunni-dominated rebels.

"Shiite militias forced us and all the other Sunni residents of my area to leave a few months ago, so all of my family left for Daraa, I moved to another part of Damascus because I have a job with the government and cannot afford to lose it," he said.

"This Ramadan I miss those social ties, I've cried a few times because I'm away from my family, and it's too dangerous to go to the mosque, even the one next to my house," he said.

In the early months of the uprising, before the war, when peaceful protesters were calling for sweeping political reforms, demonstrations would frequently start in mosques, one of the few places people were able to meet in large groups. Strict laws prohibit gatherings of more than five people without advance permission from the authorities in Syria.

Security forces have since focused on mosques, where they have increased their presence for Ramadan. Some prominent city mosques have been closed for the month on orders of the ministry of religious endowment, according to sources close to mosque administrators.

"Mosques that were used for protests have been closed by the regime on the pretence they are being renovated, including Al Hassan mosque in Midan, Al Rifae in Kafa Susa and some others," said a member of a clerical family in Damascus.

"At the rest of the mosques you can notice the security men waiting, Syrians are afraid to go to the mosques, especially the well known ones, because they think someone will target them, that there will be an attack."

"Those fears are worse this year than last Ramadan, last year people still went to the mosques," he said.