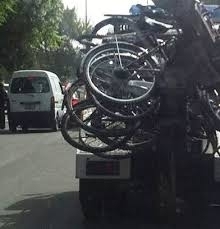 Damascenes don’t bike for sport or leisure, but primarily for transportation.

During the past three years, the suffocating daily traffic on the streets of Damascus and the increase in fuel prices led many of the city’s residents to turn to bicycles as a mode of transportation – even before the country’s 2011 uprising. Even women started riding bikes despite social stigmas against it.

But the cycling phenomenon did not last very long before Syria’s overbearing security apparatus intervened. In April, security personnel began stopping cyclists at checkpoints, which led to the confiscation of their bikes and even harm to the cyclists.

There was no legal justification for the stops, at least until June of this year. That’s when the Damascus Traffic Directorate officially banned bicycles from the city.

“Bicycles are the cause of many legal violations, and they may even be a method used by fugitives running from the law and from security searches, or to transport illegal substances,” said Saad, 40, an employee at the Damascus Traffic Department.

The state’s paranoia isn’t completely baseless: Bicycles have been used during protests to express opposition to the Syrian President Bashar Assad’s rule.

In early 2012, a speaker inside a sealed metal box was attached to a bike in Damascus’ Souk Hamidiyeh. The bike was then locked in the middle of the souk, which was bustling with merchants, pedestrians and security officers. The preloaded speaker began blasting revolutionary songs, critical of the Assad regime. The security officers were not able to stop the noise until much later.

Incidents like this have led the Syrian security apparatus to perceive bicycles as innocent-looking but potentially dangerous transportation devices.

“They may grant bicycle licenses soon, but the security situation has us on high alert, and cyclists tend to take short, tight streets so they don’t pass through checkpoint searches,” said Saad at the Damascus Traffic Department.

One can observe the transportation of confiscated bikes to unknown locations from several checkpoints on the main streets of the capital. Bike owners say it is very difficult to retrieve a bicycle after it has been confiscated; the bikes’ owners assume that their bicycles are treated as scrap.

Traffic police fine people with bicycles inside the city 260 Syrian Pounds (approximately 90 U.S. Cents), and the bike is held until the fine is paid.

The restrictions on bicycles escalated gradually, and are still unevenly enforced. Cyclists may pass through one checkpoint that lets them go unmolested. Another checkpoint may ask for a bicycle license, even though there is no such thing, and confiscate the bike when the non-existent license is not produced.

Cyclists say traffic police are more lenient than intelligence and security personnel when it comes to confiscating people’s bikes.

Other checkpoints may only implement the law when the cyclist’s identification papers show that she or he lives in an opposition controlled area.

Mohammad, 40, a bicycle shop owner in Bab Sharqi, expressed sorrow at the confiscation and banning of bikes. He’s seen piles of confiscated bikes stacked in the municipality square in the center of Damascus.

Mohammad has seen his sales slide since the ban was put into place. He says it is not strange in light of the violence raging in Syria that the state would make this sort of decision and that ordinary citizens would bear the burden.

“I hope for solutions and concessions in the near future on this matter,” he said. “My business has suffered as a result of the ban. The demand for bikes has declined after demand increased so sharply, especially from young people, in the period before bikes were banned.”

Price increases, the rise of the dollar exchange rate, and the bad economic situation also contributed to lower demand. As a result, bike prices increased one and a half times for mid-range models and three times for high end bicycles, like mountain bikes and racing bikes. Prices now range for bikes between $350 and $500.

Smaller bicycles also saw a decline in sales, as the streets and squares are no longer safe for children to ride their bikes. Many specialized bike shops in Damascus have shut down.

And then there are the cyclists themselves. A young college student named Mohammad used to ride his bike from home to school. His bike was finally confiscated at a checkpoint, and he was nearly arrested.

Hassan, 18, uses his bike to deliver goods and restocks items as part of his work at his father’s grocery store. He says he travels short distances, and passes through small streets and avoids main roads, in order to avoid the authorities.

“I need the bicycle for work, and I try my best to keep it from being confiscated,” he said.

Hasan’s situation is similar to many others who prefer to risk losing their bikes by continuing to ride their bicycles – albeit with some added precaution and shrewdness.

Others in Damascus have turned their bicycles into small shops to earn a living. Mounir, 60, is one such case. He’s retired, and began selling Damascene sweets known as Tamari Kaak in his free time. He used to ride from neighborhood to neighborhood in Damascus with a small box he designed to house the sweets on his bike. Now, he sticks closer to home.

“I chose a specific area close to my house to spend most days selling my wares there for fear of having my bicycle confiscated,” Mounir said.

Motorcycle owners do not fare any better. They are also banned inside cities, and especially the capital. Many motorcycles have been confiscated over the last two years, but there are plenty of violations committed by state security officers themselves, many of whom use motorcycles to get around the city.

Previous bombings in Damascus have used booby-trapped motorcycles, such as the bomb that targeted worshippers exiting from a mosque in the Rukn El-Din neighborhood of Damascus in September 2012.