Services in Daraa are provided to beneficiaries regardless of their “political, ethnic, or sectarian affiliation" 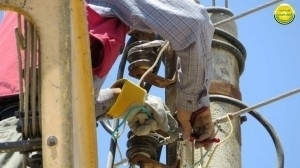 Reports indicate that the Syrian opposition is advancing rapidly in Daraa, the Syrian province generally recognized as the location of the first major protests of the Syrian uprising in March 2011. This military action is paralleled by civil opposition work that began on the ground a year and a half ago, represented by the establishment of the General Committee for Civil Defense in Daraa.

Government services have disappeared from opposition-controlled Daraa after government buildings were damaged during fierce battles between President Bashar al-Assad’s forces and the opposition.

Dr. Abu al-Nour, 28, one of the founders of the committee, said that it was established to offer various basic services after it became apparent that the conflict would be protracted. The founders tried to offer emergency relief “within an organized institutional framework,” according to Abu al-Nour.

Daraa’s neighborhoods suffer from outbreaks of illnesses due to the accumulation of garbage in the streets after the municipality stopped collecting garbage. Residents complain of sewage leaks in some neighborhoods caused by the destruction of the sewer system as a result of the constant bombardment. The war has also led to the toppling of electricity poles and the disruption of the power supply. Workers in the Daraa committee say that they are trying to fill these needs in addition to offering medical aid.

These services are provided to beneficiaries regardless of their “political, ethnic, or sectarian affiliation,” according to the slogan on the committee’s Facebook page. The population is racially homogeneous and consists entirely of Arabs. However, Christians do reside here, and members of the committee are proud to provide them with aid. One of these beneficiaries is Abu George, a 50-year-old who was shot in the eye. Members of the committee smuggled him into Jordan for treatment that was unavailable to him in the field hospital, but Abu George lost his eye anyway.

Abu al-Nour says that the Committee is trying to help families find gainful work by training women to sew in order to provide their families with a stable income. In addition, Abu al-Nour says that the committee employs men and women for a monthly wage, tutors children who are away from school, prints brochures on international law and human rights and distributes them to opposition fighters in the area.

Um Hayan is a homemaker, a mother of three, and one of the beneficiaries of the committee’s services.

“The committee provides my family with a monthly food basket,” she said. “Sometimes there are delays and the basket arrives in the middle of the month, but we know it is due to difficulties in movement or delays in the arrival of aid to the activists.”

She adds that the young men of the committee helped rebuild her neighbor’s house after it was partially destroyed when a missile landed on it.

“We are funded through the committee members’ efforts in reaching out to individuals and humanitarian NGOs outside of Syria,” said Rudy, 27, one of the Committee’s founders.

“We provide them with reports on the committee and its work, and make sure there are no conditions attached to the money and that the funders do not interfere with our work and goals. The aid does not have a political agenda. We are transparent on principle and publish the amount of funding we receive on our Facebook page,” she said.

The page does publish these figures, in addition to proposed annual budgets for the city of Daraa, but excludes numbers related to the committee’s work in the countryside.

The committee’s members try to overcome numerous difficulties they face within the context of their work.

“We suffer from weak organization in our offices for various reasons, the most important of which are communication and movement,” said Ammar, 38, a journalism graduate and a field worker with the Committee. “We work hard to overcome these obstacles.”

The committee’s relationship with the armed opposition is not always smooth. It stopped its work in May to protest the beating of a field hospital doctor at the hands of a member of the Horan Martyr’s Brigade, after the latter insisted on staying in the hospital during the treatment of his wounded friend.

Ammar insists that the relationship between the Committee and the armed opposition is one of mutual respect. Factions such as the Horan Martyr’s Brigade, the Southern Unity Brigade, and others have formed an alliance under the banner of the “18 March Gathering.” They provide the committee with garbage trucks and bulldozers, which had been difficult to procure due to lack of funding, according to Ammar.

Despite the obstacles facing the committee, its members seek to expand their work to include the entire province of Daraa and then implement their model in other areas not controlled by the regime.

“We began expanding our work in May and established offices in the towns of Naseeb and Tal Shehab in the Daraa countryside,” Rudy said. “We do sometimes make organizational mistakes because of the difficulty of communication. There is sometimes overlap between two teams, so garbage is not collected in a certain area because each team thinks the other has taken care of it. Despite these difficulties we feel optimistic, because what we are doing is extremely important for the future.”

Her colleague Abu al-Nour believes this work must continue.

“If the uprising ends, we will need these institutions after the fall of the regime to do the work of collapsed state institutions,” he said.