Ironically, the regime’s newest attack falls one year to the day since Obama issued his “red line” threat 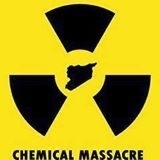 The Syrian regime has made a great shift in the war thatit has been waging against the Syrian people for the last 30 months. On the morning of August 21, hundreds of people, mostly women and children, were killed when Bashar al-Assad's forces attacked the Ghouta region east of Damascus, reportedly with nerve gas.

This new crime against humanity incited a huge wave of anger among Syrians and their friends across the world. It is thought that the attack took the lives of 1,300 people, according to Syrian activists. What was remarkable, however, is that the anger was directed not only toward the Syrian regime, but also towardthe international community, the Western governments, and the United States administration.

In their first reactions on Facebook, activists poured their anger upon President Obama, Ban Ki-Moon, and other Western leaders. The spur-of-the-moment campaign, which expressed bitterness, rage, and shock, outlined that it was not only Assad who committed the crime, but that these leaders also deserve equal blame for it.

Ironically, the regime’s newest attack falls one year to the day since Obama issued his “red line” threat. One blogger asks if that is why Assad did it, “to show the world that he’s still alive, kicking, and defying the United States a year after Obama talked fake-tough about him?”

Most of the campaign activists were young men and women whose only window to express their feelings is Facebook. “Could somebody please ask Obama about the new position of the red lines,” wrote an activist, reminding that President Obama had repeatedly warned Assad not to use the chemical weapons.

But it was not only grassroots activists who accused the West and the UN of collaborating directly with Assad.Political analyst and academic Muhydin Lazikani believes that Obama has purposelyignored his red lines and the evidence that Turkey had received from activists when Assad used chemical weapons in Saraqeb.

Lazikani told The Syrian Observer that Obama “has broken his image and credibility in the eyes of Syrians and the entire world, and has allowed the Russian[s] to accuse the rebels of using the chemical weapons.”

“Obama’s attitude will push the Syrians towards [the] extremism that the West fears most,” Lazikani added.

Human rights activist Mulham al-Hasani published a photo of President Obama with American children, commenting that Obama holds his children between his arms while “our children die of chemical weapons. You do not deserve to be the head of a state that claims to defend freedoms and humanity across the world.”

“Obama,” Hasani adds, “you are a partner of the killer in your shameful silence. You are [a] shame to the American people.”

Bilal Aboud, a human rights activist, was less emotional, but more sarcastic. He wondered if the UN Secretary-General Ban Ki-Moon “will express concern or resentment.” But after only a few hours, Aboud lost his sense of humor, writing, “if the world did not move, it is new evidence that Assad’s regime is a mere contractor, among others, whom Israel employs.”

Washington-based dissident journalist Eiad Shurbaji, who comes from the area that was targeted, wrote on Wednesday with clear pain, the “Damascus countryside is being destroyed and Assad couldn’t care less about the investigation committees, or the entire world, on top of whom is Obama himself. To hell with such a world!”

Leading opposition figure George Sabra made an announcement on Wednesday asserting that at least 1,300 people were killed in the nerve gas attack. In response, the opposition Syrian National Coalition called for an urgent U.N. Security Council meeting on the subject.

But the rage is not limited to Syrians.William J. Dobson, an American journalist, wrote in Slate,“If these reports prove true, August 21st will surely be the worst single day in the slow-burning massacre of innocence that has marked the past two years in Syria.That’s not because of the number of dead, or at least not because of the number alone. It is the way these people would have died—in precisely the manner the United States and the international community once claimed they could not allow.”

As Dobson points out, President Obama repeated his warning to Assad at least four more times in the months that followed his first red-line pronouncement. He explicitly said the use of chemical weapons would be “a game-changer” for the United States. Dobson writes:

Of course, not much about the game changed. Even after America’s allies saw clear evidence of chemical weapons attacks, the White House needed more. And after the Obama administration announced it would begin arming Syria’s rebels, it wasn’t clear what those arms would entail.More tellingly, that effort still hasn’t begun.

“It’s a safe bet”, Dobson adds, “that President Obama will never refer to ‘red lines’ again, because if he does, no one will know what he means.”

On the other side of the scene, some loyalists to Bashar al-Assad celebrated the attack, making no efforts to hide their joy. Their Facebook pages reflected their feelings. Loudspeakers were erected on cars that roared down the streets of Damascus.Media and social media reported thatcertain neighborhoodsheavily populated with loyalists celebrated the attack by distributing candy in the streets. Faiek al-Meer, a leader of the People’s Democratic Party, wrote on his Facebook page addressing Assad’s loyalists, “You can dance around the bodies of your victims, exercise your sadism, and distribute sweets, but you will not be able to exterminate the Syrian people.”

But this was not the general scene. One activist in the coastal region, where a large percentage of Assad’s loyalists live, told The Syrian Observer—on condition of anonymity because she is still in Syria—that people were not happy when they heard the news.

“People looked sad to me,” she said, “They did not understand why such a thing would happen. Most of them did not believe that Assad could do such a thing.”