He said it jokingly but it could happen soon. Assad: I should have won the Nobel Peace Prize 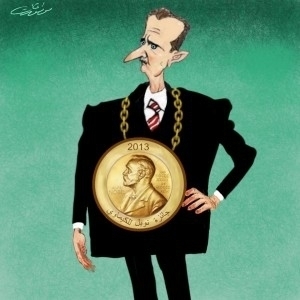 Syrian president Bashar al-Assad has ‘jokingly’ claimed that he should have won the Nobel Peace Prize after it was awarded to a group tasked with disarming his nation’s chemical weapons capability. This joke may end up a reality.

The western powers have called upon Assad to step down several times, they have said he has lost legitimacy, and only a couple weeks ago they were at the verge of striking the Syrian regime. But now they praise the very same person for complying with the decision to give up his chemical weapons.

The story is simple. The West has downplayed the Syrian cause—a revolution backed by the majority of the Syrian people against a corrupted, dictatorial regime—as a mere issue of using chemical weapons.

“The prize should have been mine,” Assad laughed at the presidential palace in a chat with Lebanese journalists, as he questioned why the award was handed to the Organization for the Prohibition of Chemical Weapons and not to him, as reported by the pro-Hezbollah newspaper, Al-Akhbar.

The paper did not state what the reaction was of the journalists who heard the joke. However, according to one Western journalist, however “tongue-in-cheek the assertion may have been, the world’s eyes would have been raised in unison at the flippancy of a man whose civil war has cost 115,000 lives and counting.”

Some of the journalist who know Assad well may not have laughed, and may have known that this was not just a tongue-in-cheek phrase.

This idea might be convincing in the eyes of many.

The Syrian regime has managed to portray the Syrian conflict as an Islamist rebellion against a sectarian regime that represents a diverse society. Many regional and international actors helped this image come into reality. By supporting al-Qaeda and al-Qaeda-associated groups in Syria, the image of an Islamized rebellion gained more and more legitimacy.

ISIS is dominating the greatest part of the areas are under the opposition groups’ [control], and they work hard in order to [eventually] take Syria centuries back, wanting to govern according to the most radical Islamic rules.

ISIS has pursued and arrested civil society activists, including the very activists who started the revolution against Assad before ISIS had even heard of Syria.

A report by Human Rights Watch on Friday accused five Islamist factions of executing and kidnapping civilians during an August offensive against Alawite villages in the Latakia countryside. The report makes a general accusation of complicity against all 20 groups in the offensive, including the Supreme Military Council and brigades of the Free Syrian Army — even though HRW acknowledges that most of them were probably not in the villages where the killings took place.

The renowned writer and activist, Yasseen Haj Saleh, who had lived inside Syria for the duration of the revolution moving from one place to another in his struggle against the regime, had to leave the country and seek refuge in Turkey. Razan Zaitouneh, a prominent leader of the revolution in Damascus countryside, has received serious threats from people close to ISIS.

In the meantime, the Syrian political opposition is still divided and lacks a real, pragmatic vision. Its focus is on overthrowing the regime, but the group does not spend any time or effort to put together a vision of Syria for the day after the regime has changed, [and hasn’t articulated] what kind of transition Syria will be leading.

The Western powers, who have never been serious about overthrowing Bashar al-Assad’s regime, will find it appropriate to say they have done what they could. Meanwhile, the situation in Syria is rapidly deteriorating and there is a need to stop the killing now.

The West’s discourse has dramatically changed since the chemical weapons deal. Last week, commentators spoke about rehabilitating Assad to finish his term and about a potential run for a third term in order to help the international community get rid of the chemical weapons, which requires more than a year to be finish.

I do not expect that Secretary Kerry has read what Razan Zaitouneh wrote last week about the UN Security Council resolution 2118.

“As a human rights activist who has always believed in the humanitarian principles of the United Nations,” Zaitouneh wrote, “I can talk for hours about the psychological breakdown and the amount of humiliation I felt after the adoption of UN Security Council resolution 2118. This resolution implies that Bashar al-Assad will continue to rule Syria for at least one more year, with the international community’s acquiescence. The resolution also reveals the lie we have all been living regarding the human rights principles that have not been applied, not even in form, in Syria.  If this is how I have been affected, how does the ordinary Syrian citizen, who has never believed our misleading slogans about human unity and equality, feel after suffering such discrimination and injustice?”

Razan believes that the world goes further in disrespecting the sufferings of the Syrians by awarding the Nobel Peace Prize this year to the Organization for the Prohibition of Chemical Weapons. This award shows the West has exchanged its moral and ethical obligations for the legal ones.

“Meanwhile,” she continues, “Assad, the real criminal, is free because no one cares.”

In fact, Assad is not only free. He is asking for the Nobel Peace Prize. Personally, I will not be terribly surprised if he won it next year.