Syrian children are suffering from improvised Turkish policy, the absence of a clear vision from the Coalition, poor financial resources and the absence of a real and effective role for U.N. 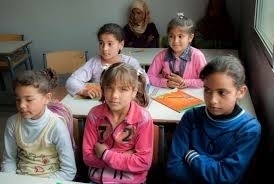 “Oh God, I miss my school,” said Mohammed, 12, as he recalls his school and classmates in Syria after he fled to Turkey to escape the Syrian regime’s bombs.

“I have not studied or done homework for a whole year. My school has been destroyed and we are refugees here in Turkey now,” Mohammed explains.

Mohammed is one of hundreds of thousands of Syrian refugee children in neighboring countries due to the war. The future looks terrifying for Syria with a whole generation of children dropping out of schools and illiteracy rates rapidly increasing.

The education problem is one of the most complex problems facing Syrian refugees in exile, particularly in Turkey. Syrian children are facing an obstacle with the foreign language, which is also preventing them from continuing their education.

Neither the Turkish government nor the United Nations have managed to address this problem after three years of war in Syria.

Syrian businessmen and some charities have also established a few Syrian schools teaching the Syrian curriculum. However, these schools accept only student who can afford payments, which are expensive.Belad al-Sham is one such school, where students must pay $1,500 a year to be registered.

Omar is a high school student.  He suffered for a long time after being accepted in a Syrian school.

“I checked al-Istiklal school in Gaziantep several times. They say that my name is on the list and I should wait and they will contact me. But they haven’t. They contacted me lately to inform me that I have been accepted in the literary department, even though I am a science student. I don’t have any choice now. I had to accept," Omar explains.

Many parents complain about the lack of places in Syrian schools in Turkey, and the inability to register them in private schools due to huge expenses.

“I searched a lot of schools and cities but I could not register my children. I can’t afford private schools,” Abu Yousef, a father of five, says.

A huge number of Syrian children are out of school which has exposed them to all kinds of abuse and exploitation. It is normal to see Syrian children selling water and cigarettes next to traffic lights in Turkey, rather than attending schools and establishing friendships which may help them to regain part of the normal life they left behind in Syria.

Schools supported by the Coalition and the Turkish government are free, or at least affordable. They, however, also suffer from overcrowding.

An average of more than 60 students inside classes mean the daily period doesn’t exceed thee hours per day, raising the question of how a real education for Syrian students can be provided in those schools.

In addition to all of that, Syrian students who obtained a high school diploma suffer from the problem of international recognition.  At the beginning of this year, the Turkish government recognized the high school diploma issued by the Supreme National Commission for Education of the Coalition, based on a decision from the Turkish Ministry of Education. This decision included the universities of Istanbul, Ankara, Adana, Mirsen, Erzurum, Van and Gaziantep.

The Libyan Ministry of Higher Education contributed to solving the problem by allowing intermediate and high school students to get Libyan intermediate and high school certificates internationally recognized after passing Libyan exams. Many Syrian schools are adopting this method to solve this problem in order to enable Syrian students to continue their academic education.

Many Syrian university students had problems in continuing their education. This year the Turkish government allowed those students to continue their studies in Turkish universities after providing documents confirming registration at one of the Syrian universities.

The unexpected expansion of the conflict in Syria, the improvised Turkish policy on Syrian refugees, the absence of a clear vision from the Coalition, poor financial resources and the absence of a real and effective role for the U.N. have all deeply affected the implementation of educational programs and increased Syrian refugee suffering in Turkey.