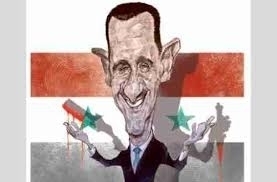 The following are some “prerequisites” of the candidate for the Presidency:

•             Is a resident of Syria for at least ten consecutive years when applying for the nomination.

Al Watan was informed that the relevant committees in parliament were recently “mobilized” to discuss the draft of the new general elections law that was submitted to parliament and was scheduled to be discussed today under the dome.

According to the bill, of which Al Watan has obtained a copy, this law aims to organize the elections of the president, the members of parliament and the members of the Local Administration Councils, in addition to organizing the local referendum.

The bill guarantees the voters’ right to choose their representatives freely through a safe and honest electoral process. It ensures the right of the candidates to monitor the elections and [provides] for the punishment of anybody who falsifies their will.

The bill determines the regulations of funding of electoral processes and their organization. It includes clauses about establishment, tasks, and the functional mechanisms of the judicial sub-committees of the elections and nomination committees.

The bill devotes a special chapter to the constituencies and the number of their seats. As for the election of the president and the referendum, it considers the whole Syrian territory to be one constituency, and [stipulates that] the parliamentary member elections are held on the base of the constituency.

Every constituency includes a number of candidates equal to the number of their devoted seats.

Every province is considered one constituency in relation to the election of its representatives in the Parliament, except for Aleppo and the Damascus countryside. Aleppo consists of two electoral constituencies; one of them is for the city of Aleppo and the other is for the [other] areas in the Aleppo province.

The bill includes a special section for “the general electoral register”—writing in which is considered a fundamental right and responsibility of all citizens who meet the prerequisites of exercising the right to vote. Every citizen has the right to request registration of his name in this electoral register, and to verify that his name has been written down in case it is not already registered.

The bill requires that the presidential candidate:

•             Retains all his political and civil rights and not have been convicted of a felony or any disgraceful misdemeanor that is incompatible with public trust, regardless if he was cleared of the charges later.

•             Be a resident of the Syrian Arab Republic for at least 10 consecutive years when applying for the nomination, and not holding any other nationality.

According to the bill, the president is elected directly by people. The president of the parliament calls for the election of the president in a period between 60 and 90 days from the end of the incumbent president’s mandate.

The call must include the election date. Anyone who wants to run in the presidential election must inform the parliament about his desire, so that the members of the parliament can support his nomination.

The nomination for the post of President of the Republic starts from the day following the call, and the Supreme Constitutional Court supervises the presidential election and regulates all its procedures.

The candidacy application is submitted by the candidate himself or his legal representative to the court to be registered in a special register according to the order of its receipt within a period of ten days starting from the day following the call for the presidential election.

The candidacy application will not be accepted unless it receives a written advocacy signed by at least 35 of parliament members, none of whom are allowed to support more than one candidate for the presidency of the republic.

The Supreme Constitutional Court shall examine the legal status of the applications and make the decisions about them within five days following the end of the submission period. Then it announces the names of those accepted for the nomination.

Those whose applications are refused have the right to appeal within three days, and the same Court will make a final decision about their appeals in the next three days.

The Supreme Constitutional Court shall prepare a final list of the candidates’ names and announce this list by publishing it in two daily pages in the official newspaper at least 15 days before the day of the ballot.

The bill states that the functions that are related to the election of the president of the republic and achieved by the Supreme Judicial Commission for Election, the sub-committees, and the committees of the polling centers are supervised by the Supreme Constitutional Court.

The candidate is also required to be more than 25 years old at the beginning of the year of the election, and to have all his political and civil rights. He should not be deprived of his right to vote, and not convicted with a felony or any disgraceful misdemeanor that breaches the public trust, unless he is rehabilitated.

As for the member of the Parliament, he is required to have at least a high school diploma and a certificate of basic education, or its equivalent, for membership in the Local Administration Councils.

As for the election campaign, the bill stipulates that the candidate for the presidential election, after the final acceptance of his application for the nomination, can declare the news of his candidacy to the presidency, and must provide the Supreme Constitutional Court with a statement about his plan, objectives, and everything related to his work program in addition to a final account of the incomes and expenses of his election campaign during a period of 30 days from the announcement of the final election results.

Each candidate and political party running in the Parliament or Local Administration councils must provide the Judicial Committee of the Election with a final statement of the incomes and expenses of their election campaigns during a period of 30 days since the announcement of the final election results.

The final statement of the candidate to both the election of the presidency, the Parliament membership, and to the Local Administration councils must clarify all the amounts that were spent in the election campaigns and their sources, and the accounts of the political parties must be audited by a chartered accountant.

The bill states that when the votes have been counted, the Supreme Judicial Commission presents the results to the Supreme Constitutional Court.

In case the final results show that any of the candidates has obtained an absolute majority of the votes, then he is considered the winner of the presidency, and parliament announces this result.

If the results showed that none of the candidates received an absolute majority of the votes, the president of the Supreme Constitutional Court announces the run-off election in two weeks between the two candidates who received the greatest numbers from all those who cast ballots.

The candidate who receives the greater number of votes in the run-off is considered the winner of the presidency, and the president of the parliament announces the result.

The Supreme Constitutional Court makes the final decision about the appeals that the losing candidates [may] submit within three days of the announcement of the election results. The appeal is written down in a special register, and the Court issues its sentence within seven days from the date of the end of the appeals submission and its decision is final.

The same court also makes the decision regarding appeals of the winners of the parliamentary election. The losing member [may] submit the appeal within three days of the announcement of the election results, and the court issues its sentence within seven days from the end of the appeals submission period and its decision is final.

These courts make their decisions about the submitted appeals as soon as possible within no more than 15 days from the date the case was registered. Their sentence may be appealable in front of the Supreme Administrative Court within five days of its issuing.

The Supreme Administrative Court makes its decision about the submitted appeals within 15 days of their registering date and its decision is final.

As for voting by Syrians who live outside Syria, the bill stipulates that every Syrian citizen living outside of Syria has the right to vote for the president of the republic in the Syrian embassies, provided that his name is contained in the electoral register, unless there is any legal impediment forbidding him from exercising his right to vote.

The bill also stipulates a punishment of one to three years in prison and a fine of 50 to 100 thousand [Syrian] pounds for anyone who breaks the ballot box before counting, [or who] distributes, steals, damages or replaces the ballots that are in it with other ballots, or tries to do anything to change the election result or break the secrecy of the vote.

The maximum penalty is applied in cases where the perpetrator is a member of the electoral commissions, an employee of those who are involved in them, or a police officer in the internal security forces charged with guarding the ballot boxes.

A punishment of imprisonment [ranging] from 10 days to three months and a fine of 25 to 50 thousand pounds is stipulated for anybody who makes or tries to make people vote or abstain from voting in return for a promised financial reward, gifts, cash or in kind donations, public or private employment, or any other benefits in order to influence the vote directly or indirectly.

A punishment of imprisonment [ranging] from three months to one year and a fine of 50 to 100 thousand pounds is stipulated for anybody who collects identity cards or takes, conceals or damages any documents related to the electoral process or tries to change the election result in order to falsify the truth or to cause a run-off.

The bill also stipulates a punishment of imprisonment from six months to one year or a fine equivalent to three times the amount for anybody who receives, directly or indirectly, any cash or in-kind assistance, grants, donations or other assistance from external or foreign sources “for the purposes of his election campaign.”