The past two years have witnessed a mass exodus from the war-torn Damascus countryside to the centre of the capital and to other, safer, areas 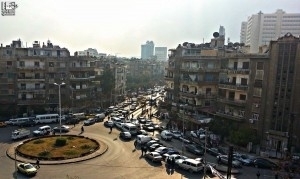 Ahed left the Qaboun area on the outskirts of Damascus along with his wife and small child hoping to find a new place to live.  But he  ended up moving continuously between his parents’ and his in-laws’ home for four months while looking for a place to rent.

“I finally found what I was looking for in the Doummar area, through a combination of coincidence and help from a relative, because there don’t seem to be any vacant places in Damascus at the moment,” the 35-year-old said. “And even when you get lucky and manage, with difficulty, to find an available place, you’ll be so shocked at the rent that you’ll find yourself rethinking your decision.”

The past two years have witnessed a mass exodus from the war-torn Damascus countryside to the centre of the capital and to other, safer, areas. As a result, there is much higher demand on empty apartments, and rents have risen to an unprecedented level in Damascus. This has added to the burdens of Damascenes as well as those looking for a refuge in the capital, making it seem as if there are no empty apartments able to accommodate any more refugees.

Another Syrian, Sami, left the Barzeh neighbourhood with his wife in March 2013.

“While looking to find a place to rent, my wife and I took a room in an inn,” the 30-year-old said.  “It became quickly clear that there are very few safe neighborhoods in Damascus with reasonable rents, as well as very few available apartments.

Sami went on to say that in middle-class suburbs such as Jaramana, Sahnaya and Qudsaya, a two-bedroom apartment can be rented for between 25 and 35,000 Syrian lira per month (between about 167 and 234 US dollars ). For this reason, Sami found it more practical to stay in their room at the inn, located in the popular Sarouja Souq in central Damascus instead of looking for an apartment, since Sami already pays 800 Syrian lira per day (about 5 dollars).

This  also includes electricity and water,” Sami said.  “And the inn is also very close to where we work.”

The rents fluctuate by area, though they are similar in some of the neighbourhoods in central Damascus, such as Muhajireen, Baramka, Adawi, Mazraa, Mazzeh and even in the old town. The rents  vary according to the size and location of the home: a two-bedroom apartment anywhere between 50 and 100 thousand Syrian lira per month.

Since so many people are unable to shoulder such rents, this has led to a large number of Syrians trying their hands at communal living, a phenomenon that has become more and more widespread over the course of the last two years. Two or more families live together in the same home, sharing the burden of the monthly rent. For years, Ahmad and Adel, two brothers in their thirties, lived in neighbouring houses at the Yarmouk Camp with their families. When they were displaced over a year ago, they were forced to live together in one home in Jaramana.

“Both of us are government employees,” says Ahmad. “And neither of us can afford the rent on our own.”

Adel says it wasn’t easy for him and his brother to find a place since many landlords refuse to rent to larger or multiple families since they’re afraid for their furniture. Although they found an apartment, the current situation is far from ideal.

“It’s not easy to live with another family, even if you’re brothers,” he said. “It’s difficult and bothersome and we’re all aware of it, but we have no choice.”

The high rents are not the only obstacle faced by renters. There is also the matter of “difficult and inhumane preconditions enforced by most landlords,” explains Dunia, 47.

A homemaker, Dunia lives with her husband and three kids in a rented home in Masaken Barzeh; they pay 45,000 Syrian lira to rent a two-bedroom apartment per month. She explains how their landlord, after three months, gave them the option of either increasing the rent from 38,000 to 45,000 Syrian lira per month, or paying six months’ worth of rent in advance.

“We paid the bulk amount,” she says. “I think we’re very lucky to have two of our children working in the United Arab Emirates, helping the whole family with the rent.”

In an interview with Al-Iqtisadi website, Amer Youssef, a researcher in real estate economics, explained that “there is a big freeze in terms of buying and selling on the real estate market, while at the same time, rental prices are going through the roof, as a result of areas now being classified as either safe or not; there are a lot of people exploiting the situation and inflating prices to up to four times what they were before the crisis.”

Abu Nidal, 50, who runs a real estate office in Masaken Barzeh, justifies the hike in prices.

“There is a general inflation of prices of all goods and services, accompanied by the low exchange rate of the Syrian lira, which means landlords have a right to raise rents so as to avoid losing money,” he said.

Rental prices before the conflict began in 2011 were not ideal for most Syrians in Damascus, either, especially when measured against the average monthly wage in Syrian, which in 2010 was around 87 dollars. This amount was equivalent to the average price of rent for a house in the suburbs of Damascus during that same year.

The most recent study undertaken by the United Nations Economic and Social Commission for Western Asia (ESCWA) revealed the destruction of about 1.5 million homes in Syria. According to the Al-Iqtisadi website, the study also indicated that about 7 million people have been affected by this damage, and that 3 million people were displaced, while about 1 million citizens lost the entirety of their possessions. The area of the Damascus countryside came in only second to Aleppo in terms of areas that have been most exposed to destruction, having had half of its homes destroyed, or about 303,000 houses.

The fact remains that many of these homes were destroyed in the vicinity of the capital, making Damascus into a sort of narrow lifeboat, increasingly crammed with passengers from the surrounding areas to the point where it can barely fit any one else. This is what Sami finds most painful.

“We left two beautiful homes behind in Barzeh, and found ourselves in the capital among a scarcity of empty homes, terribly inflated prices and the greed of some owners,” he said.