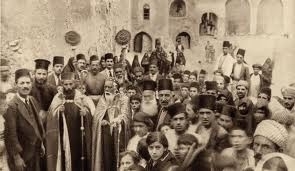 A military operation by some opposition battalions coincided with a referral of Gabriel Kourieh, the Assyrian Democratic Union Secretary, to Damascus Criminal Court on charges of undermining the prestige of the state and weakening the national character. The referral signals an attempt to charge Kourieh in an unconstitutional manner for being a member of an unauthorized organization.

These two scenes are an abbreviation of the conflicted Armenian and Syriac Christian communities position in public Syrian life, not only in the current circumstances, but throughout decades.

Despite there being no proof or evidence that Armenians have been targetted in Kassab, in the norther Latakia province, during opposition military operations there, the incident prompted comments and demands to protect the Syrian Armenians from the Syrian political and military conflict.

These demands were voiced by some artists and international personalities of Armenian origin. News was circulated about the arrival of some Armenian fighters to defend Armenian areas and civilians in Syria.

The events are a summary of Syrian Armenians' identity in Syrian public life: On the one hand Syrian Armenians consider themselves neutral, away of political and social conflicts in Syria, and a wide segment of the Armenian nation and community across the world consider the Syrian Armenians as a temporary population in Syria. On the other hand, they are treated under the Syrian system as a special demographic group whose affairs are being managed from outside the country.

Certainly there are a few Syrian Armenian cultural and political figures that do not interact with the Syrian scene and conflicts, according to this position. But they maintian an active role on general Syrian political and cultural issues.

It is the opposite for the Syrian Syriac community, as all other minority community groups, which is divided into three different blocks in terms of their engagement with the Syrian conflict:

2. Another Syriac block considers itself as a part of Syrian opposition forces against the regime. They have their own political organizations, activities and voices in that direction. The Assyrian Democratic Organization, established in 1957, represents its most important point of view.

3. The third block is the Syrian Syriac who sits on the fence in the face of Syrian events. Most of them are close to the Syriac Church institutions.
The difference between these two Syrian groups is not only a difference in political choices between elites, but extends to the structural configuration and methods of interaction with all Syrian internationals.

4. A more independent block exists in the Armenian community through schools, associations, language, charities, cultural and youth institutions that together form community codes separate from the Syrian structure. These institutions are safeguarded and rooted in their acceptance by the Syrian authorities. A deep feeling among Armenians is that any change in the structure of the system will expose that inner community to danger. A similatr sentiment among Syriacs, is limited to schools that are under supervision of the Church.

5. The Armenians solid political, economical, social, cross-border connections with the Armenian nation and diaspora communities in other countries are based on solidarity and a common sense of destiny. A sense of nationalism is the result of the Armenian tragedy that happened a century ago. The awareness of Armenians public domain is not limited to its objective limits within Syrian entity, but it exceeds it to broad international connections, which are not available to the Syriac case.

Within the divisions of the conflict, Armenians find themselves closer to the axis that is lead by Iran, and has to do with the conflict and bitter feeling toward towards Turkey. There are strong ties that blend Iran and Armenia in its conflict with Azerbaijan on Karabakh Negurna in the unstable Caucasian region. The Syriac, in contrast, do not have any motivations to organize their political choices on basis of political regional equations.