Shariah Commission has issued a fatwa legitimizing the trade in Artefacts 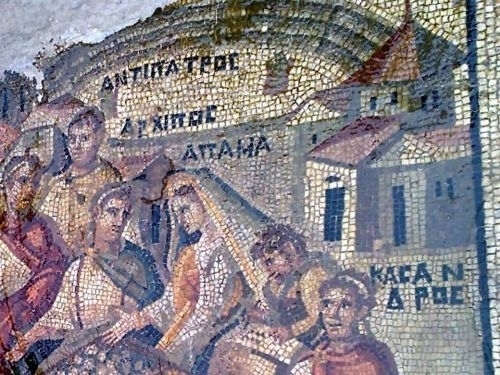 The archaeological sites in the province of Deir El-Zor are being exposed to looting, theft, vandalism and random digging, damages sites further after being taregted by Assad forces.

There has been an uptick in the sale of artifacts recently in the province and the trade is now taking place blatently, with no action from any rebel brigdes or local councils. The Shariah Commission has even legitimized the operations.

A reporter with Masar Press in Deir El-Zor has reported this sensitive issue from several aspects.  Random excavation workshops are active in all archaeological areas and the work is concentrated mainly in the areas of al-Sayyal in the eastern countryside of Deir El-Zor, Salihiya west of the city of Bo Kamal, the Castle of al-Rahba west of al-Mayadin city and the Tarqa region in the city of Asharah, which was randomly excavated recently.

As for the city of Deir El-Zor itself, excavations are taking place in both the Muqbi market and the area around the Omari Mosque.

A variety of tools are used in the digging and excavation that are usually forbidden for use on archaeological sites. Digging operations with heavy vehicles have been recorded at the al-Rahba Castle in search of artifacts that sell at high prices rates for antique dealers in the province.

Thamer Al-Mohammed, a former artifacts dealer described to Masar Press the damage caused by indiscriminate digging. He explained that all of the pieces found in the province have been sold outside the country to foreign merchants who complain that some of the artifacts they buy are damaged because of the use of inappropriate excavation tools not.

Mohammed added that the market is full of artifacts with damaged their features and value. He also confirmed the sale of artifacts stolen from museums are linked to figures from the Assad regime who are involved in the trade.

Activists in Deir El-Zor say that the absence of deterrent measurs and general ignorance to the sensitivity of this type of business has increased the digging operations.

But also contributing to the trade is the absence of legitimate authorities to monitor and deter those who dig and have failed to protect the sites. Moreover, a Fatwa issued by the Shariah Commission legitimized the search and sale of artifacts.

Sheikh Abu Mohammed, a member in the Shariah Commission, explained to Masar Press that the trade was legitimate, adding that "there is no sin in it".

But, he stipulated that "the merchant should pay half of the money he earns to Muslim banks."

Rebel brigades are avoiding collision with the workers in the excavation and sale of artifacts in order to avoid a clash with the tribes.

Abu Ayman, a field commander with the Islamic Front said that it would be unwise for the battalions to enter this problem, and said that if it was necessary to act, he prefers that it be the Shariah Commission that responds, as it is responsible for managing the liberated areas.

In light of this inability to stop the random excavation of artifacts, some activists and those interested in the issue are taking great risk to try to stop it, despite the fact that those involved in the operations are usually armed.

Regarding the role of local councils in the trade, one activist said that the local councils in general and the Council of the province of Deir El-Zor in particular, describe themselves as service organizations do not have the executive power to stop the digging and smuggling operations.

The activist confirmed that "many artifacts were smuggled outside Syria. Unfortunately, under the eyes of the tribes, the rebel brigades and Shariah Commissions."