What is important is who has authority on the ground and who practices it, says a Syrian official 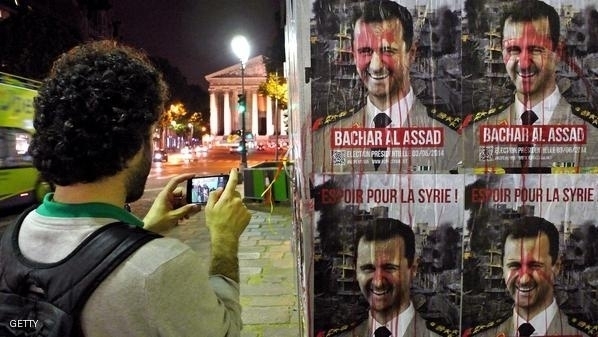 The temperature had exceeded 35 degrees Celsius (95 degrees Fahrenheit) in the Syrian capital. Traveling to the office of a government official required circumventing multiple blocked roads. The taxi driver took the initiative to explain: "The old presidential palace, known as Muhajireen Palace, is located here. It lies in the center of Damascus, in a neighborhood carrying the same name, Muhajireen. The president now spends much of his time here." He then said, "As for his house, it's located across the street [from the palace]. He moves between the two without large escorts or tight security measures. But this is what necessitated the closure of some of the narrow streets surrounding the location."

In the office of the Syrian government official, who requested anonymity, the air conditioner was running slowly. However, he was smiling and seemed relaxed, even delighted. He presented all of the developments occurring in his country with clear optimism. These developments ranged from the balance of military forces, international stances, public and secret diplomatic contacts, all the way to preparations for the presidential elections scheduled for June 3. Al-Monitor asked him: If President Bashar al-Assad is re-elected, and if this occurs with a large voter turnout, according to what you will announce, how will other countries deal with that? Will there be an external acknowledgment of the electoral process and its results?

The official smiled before answering: "I can also choose not to recognize the president in any other country in the world. But what difference will my position make? None. What is important is who has authority on the ground and who practices it. This is what we have in Syria, and we are practicing it with the support of a clear majority of Syrians. The West will deal with us as a fait accompli. This equation has been known by us for a long time."

The official paused momentarily, as if giving exceptional importance to what he was going to say, continuing: "Do you know that this is what actually happened on the sidelines of the Geneva II meetings? They initially tried to set up the conference — in form and content — to delegitimize us. They exerted all their efforts to achieve this. But from the very beginning of the conference, they knew that they had failed. The scene of the so-called Syrian opposition delegation was enough to break down their attempts to distort the legitimacy of our authority and our representation of the Syrian state. The scene was scandalous, shameful and embarrassing for these clowns and those who supported them.

"Former international envoy Lakhdar Brahimi, in collusion with Syria's opponents, of course, tried to rescue [the opposition] from their predicament by attempting to provoke us and push us to withdraw from the conference. But our representatives realized his game. Our foreign minister, Walid Moallem, displayed a cool temper, and said to them: 'We said that we are coming to stay an entire week. And we are remaining here for an entire week, regardless of the conditions, results and expectations.'

"After these attempts failed, it seemed that they went back and resorted to a counterplan. Brahimi approached Minister Moallem regarding a 'proposal' to meet with US Secretary of State John Kerry. Moallem said that he could not meet, and justified this with the Americans’ hostile stance to the Syrian state. Brahimi left and shortly thereafter one of his assistants, a European national, returned to meet with our ambassador to the UN, Bashar al-Jaafari. He relayed a personal proposal for a meeting between Minister Moallem and Kerry's assistant, [Undersecretary of State for Political Affairs] Wendy Sherman. Jaafari said that this could not occur, but asked for clarification regarding the goal of these attempts. They said to him frankly: 'They want to convey to you a political message that they could turn a blind eye on Assad remaining in office, but without holding new presidential elections.' The Syrian constitution allows for the holding of these elections, and states that the president can continue in his position at the end of his term if a successor is not elected, and stay until one is elected. Thus, they had no problem with applying this text, but [they didn't] want us to conduct elections to re-elect Assad!"

The government official smiled as he concluded this story: "These facts confirm that they will accept the election results and deal with it as a fait accompli. The situation with the Europeans in this regard is better. You can go to one of the most luxurious well-known hotels in Damascus, only a few hundred meters from where we are now, and see the movement of European visitors staying there. The hotel was nearly fully booked by the international team working to transfer and destroy Syria's chemical weapons. But the high numbers of 'secret' European delegates, and their insistence on staying in the same hotel, pushed the hotel administration to leave a few rooms vacant to accommodate these people. All main European countries are sending delegates periodically, without notification or announcement. They come under the guise of security cooperation and coordination on the issue of extremists and jihadists who come from their countries to fight in Syria. They ask for information and show good intentions to cooperate to combat terrorism in their countries. But they wish to keep this completely secret. We smile, and joke with them that soon we will ask them to make these relations public."

After addressing the Americans and Europeans, the Syrian official spoke on the positions of states neighboring Syria. "There is no problem at all [concerning the positions of neighboring states]," he said, adding, "In Iraq, [Prime Minister Nouri] al-Maliki will return and our mutual security and military coordination will continue, supporting the interests of both countries. The situation with Lebanon is excellent, especially after the Qalamoun battle and the entire border was closed to the infiltration of militants. Jordan has begun to complain about the smuggling of weapons and jihadists to its territory. It's as though the boomerang they tried to throw at us has begun to return to them. As for Turkey, this is a different subject that requires independent research. Turkey will suffer greatly from its involvement against us. Many things and faces will change in Ankara, and the relationship between our countries will not return to normal before this happens."

After addressing the political and diplomatic scene, the official sighed and said, "What's left to discuss is developments on the ground, which are much better than the political developments. This is evidenced by the results of the latest foreign delegation visit to Damascus.”