Daraya’s local council is currently governing the affairs of around 6,600 residents who remained in this city, out of an estimated population of 300,000 before the start of the uprising in 2011 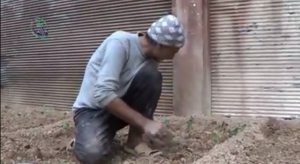 Maher, 15, has worked in agriculture with his father ever since his school in Daraya, south west of Damascus, was shut down.

“The majority of the city residents were displaced due to the siege and shelling by the regime,” said his 42-year-old father, Moussa. “There were no more teachers left and schools closed down. Since then, Maher has been working in the fields with me to help secure our needs

“Maher was a hard-working student and I will make sure he resumes his studies, but we have to deal with the current conditions,” he added.

Since July 2012, Moussa and other residents of Daraya – who Damascus Bureau interviewed via the internet due to the difficulty of accessing the city – have been subject to a siege that has caused a dire lack of food and medical supplies.

Government troops are deployed in the city’s periphery, while warplanes pound the city’s centre with barrel bombs. The Syrian army has stormed the city several times during this long campaign.

Both government and opposition fighters have accused the other side of intentionally killing dozens of civilians.

Daraya’s local council is currently governing the affairs of around 6,600 residents who remained in this city, out of an estimated population of 300,000 before the start of the uprising in 2011.

The unelected council was established in October 2012 following a meeting of influential individuals, and includes a military section in addition to offices that provide civilian services.

The description on the local council’s website, however, emphasises that this military department, which includes representatives of moderate Islamic brigades, is part of the council’s organisational structure and not above it.

“The local council is in charge of all food supplies in Daraya and gives families either food aid or money. The relief office also established a soup kitchen in the city centre,” said council member Moataz Murad, adding that three meals daily were provided until the siege was tightened and this decreased to one meal a day.

Eventually, the council was only able to provide one meal every two days.

The local council also oversees the farming of some crops to make up for the lack of food supplies.

“We have grown different basic crops on several acres of land such as wheat, barley, beans and peas along with winter crops like spinach, Swiss chard and others,” Murad explained, going on to list the council’s other activities.

“The medical office supervises a field hospital that has most of the equipment it needs and gives all the necessary treatment to the wounded,” he said. “The services office opens alternative roads when the main ones become blocked by collapsed buildings or unsafe because of the shelling. It also builds barricades to be used in battles. A plan to restore the main roads of the city is currently underway.”

The local council is trying to help people secure their basic needs in the light of their difficult circumstances.

“The only way we can survive is by being self-sufficient,” said Hussam Ayash, a member of the local council’s media office. “In addition to the agricultural project, the key to resilience is through rationing the consumption of basic materials, such as diesel used to run generators”.

Like Moussa’s family, Abu Samer, 35, said that he is suffering under the conditions in Daraya.

“I have been living under siege with my wife for over a year-and-a-half. We’re suffering the same difficult conditions as the others because of the lack of food, and inflation. The price of a kilogramme of rice is over 5,000 Syrian pounds (29 US dollars),” Abu Samer said. “Food supplies are more readily available since the truce in Moadamiya [in December 2013], but prices are still high because the road between Moadamiya and Daraya is still heavily contested.”

The regime recently sent a delegation to Daraya to reach an agreement with rebel forces similar to the ones negotiated in other towns near Damascus.

“The local council held a meeting with the heads of active brigades and battalions as well as some civilians and they elected a committee to meet with the regime’s delegation,” said a local military commander who introduced himself as Abu Ahmad. “The delegation did not set any conditions. Its members only said that they are in Daraya to get insight into the situation on the ground and report back to the president’s [staff].”

The committee from Daraya requested the release of prisoners and that regime troops withdraw from the city. The regime representatives replied that the committee should go to Damascus to start negotiations.

According to Abu Ahmad, the committee approved this but asked for written confirmation from the government that it would withdraw all troops from the areas it holds in the city and allow all residents back into their homes.

So far, no official agreement has been reached.