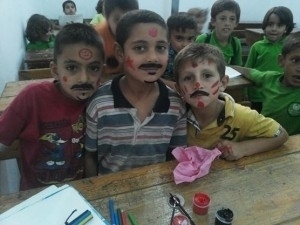 Her son and daughter attend one of the schools in the town of Hass in the south of Idleb.

In October, a month into the new school year, the Syrian regime shelled towns and villages around Idleb.

The schools and kindergartens in Hass were not spared. The high school in Kafranbel and schools in the town of Kafrouma were also hit, injuring scores of people.

“This time there will be a massacre if the plane shells the school. God forbid,” Umm Mohammad said.

Parents there face a brutal dilemma. They can send their children to school and risk the shelling, or stop them from going altogether.

“We are at a loss,” Umm Fouad, 42, told Damascus Bureau. “We don’t have any other option. Our children’s future is vanishing before our eyes, but at the same time tens of children have been killed and injured in the school shellings.”

“We decided to send them to school despite the danger in order to secure their future in this country destroyed by war.”

Abdallah is 15 years old. He is worried about air raids while he is at school.

“When the fighter jets arrive all the students are scared of the possibility that the school might be shelled,” he said. “On TV we watched many air raids on schools. I hope the last raid is the final one; schools have nothing to do with war.”

The situation has forced some parents to look elsewhere for schooling.

Abou Yasser, 51, works in the building industry. He does not dare to send his children to local schools. Instead, he decided to send his wife and son to a refugee camp so his son can attend one of the schools set up by civil society organisations there.

“I cannot bear to see a war plane in the sky while my child is at school,” he said. “My worry led me to pull him out. I had no choice but to send him with his mother to the camp so he and his sisters can go to schools that are considered safer.”

In response to the situation, two non-profit organisations have built a new school in Hass.

The Syrian Namaa Charity Organisation and Human Care Syria school has two floors, one of which is underground in order to provide protection against shelling.

It takes children from grade one to grade six and employs a number of qualified teachers, many of whom were fired from their previous jobs at regime-administered state schools.

“I decided to send my child to the Human Care school because it is underground where shells do not have much effect,” she said.

“Until now it has not been targeted like the government schools have. In addition, there are many experienced teachers there.”

Fatima hopes that similar schools will open for all ages.

“If the government schools that are being shelled were the only option, I would not send my children to school at all,” she said. “Ignorance is better than death.”

The Human Care school has accepted hundreds of students from Hass and neighboring villages. The school’s relative safety and qualified teachers make it an attractive option and it is now full.

The school also provides students with free book bags, stationary, and uniforms. It has the latest equipment, colourful murals on its walls, and games to lift the spirits of the pupils, some of whom who have not been to school for two years.

“After lots of shelling in the nearby areas and the large number of displaced people, the school has been unable to absorb everyone,” Abada Mansour, 25, who works for Human Care, said.

Since the civil war began, the opposition National Coalition for Syrian Revolutionary and Opposition Forces has enabled high school children to take exams but actual schooling has been a huge challenge in areas targeted by the regime.

“Our future goal is to build high schools for students who sat for their exams at the National Coalition which has been unable to provide high schools for them,” Mansour added. “We were about to begin the project this year, but we could not carry it out because we did not have a location. This will not stop us though.”

Meanwhile the local council in Hass, which tried to take steps to keep pupils safe during the shelling, says it is committed to repairing schools that have been damaged.

“If we had the financial means to do so, we would have provided buses to evacuate students in emergency situations,” Sobhi al-Omar, the deputy of the local council, said.

“We asked principals in government schools to keep students in classes and not let them leave when fighter jets begin circling the sky or shells falls on the town, since their dispersal will lead to even more casualties. We also called on parents to stop sending their children to school when there are battles going on.”

However Omar said there was no denying that pupils in government schools were at risk.

“The situation in these schools is dangerous because the regime persists in targeting them,” he said. “For that reason, we call on humanitarian organisations and those of the National Coalition to build their own schools to mitigate some of the dangers.”