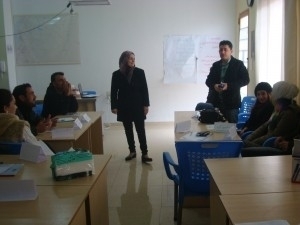 As Syria’s children continue to endure the horrors of the armed conflict, a new project in Hasskeh province in the country’s northeast is giving people training in child protection and psychosocial support.

Through the program, the Smart Organization for Mental Health and Human Development is looking to build a team of competent teachers and volunteers who can spearhead efforts to prevent violence, exploitation and the abuse of children.

According to the United Nations’ children’s charity, UNICEF, the lives of over 8 million Syrian children have been torn apart by fighting and forced displacement since 2011.

In the last year, the Islamist militant group ISIS has seized large swathes of territory in eastern Syria.

“The idea for the project came from the [British] organization, War Child,” explained Mohammad Ali Othman, a specialist in psychological counseling who runs the project’s training program.

“Its goals are to protect children from sexual, physical, and emotional abuse in war zones and to help parents prevent these abuses.

So far trainers have run three child-focused workshops in the city of Qamishli, and in the town of Amuda about 20 kilometres away, which are both under Kurdish control.

The initiative is part of a larger program being implemented by the Harras Network for Child Protection in cooperation with another organization, Syrian Women for Development.

Both outfits have run similar programs in other cities in Syria, including Idleb, Aleppo and Damascus.

The program’s activities encourage positive thinking and aim to improve children’s concentration, focus, and their ability to play together

Teachers and volunteers working on children’s issues welcomed the workshops.

“We learned new skills and information that we did not possess before,” said Maria Abbas, a third grade teacher. “We also better understood the consequences of war on children and how best to help those with special needs and those who have been subject to trauma.”

Eliza al-Husseiny is a fourth-year university student studying social science. She said the project was helpful for her volunteer work for a Kurdish women’s organization called Koulishina.

“The workshop taught us new concepts and the training allowed us to role-play situations where children had experienced physical or psychological harm,” she said.

“We hope to expand the work of our organisation by educating members on the various psychological issues children may face, as well as training them on how to approach and understand children as individuals.”

Besides teachers and volunteers, the project also directly targets mothers, showing them how to support children in times of crisis. Many mothers praised the workshops they attended.

“These educational concepts and activities for children are essential, especially learning protection and communication skills,” said Najah Mohammad, who has three children. “We were trained using new principles that we were unaware of [and] which are especially useful in these times of proliferating violence.”

One mother who has a child in the fifth grade and took part in games that were organized at his school praised the activities.

“I ran and played with the children, and for a while I forgot about the horrors around us,” she said. “I wish that children could just play and have fun far away from this environment.”