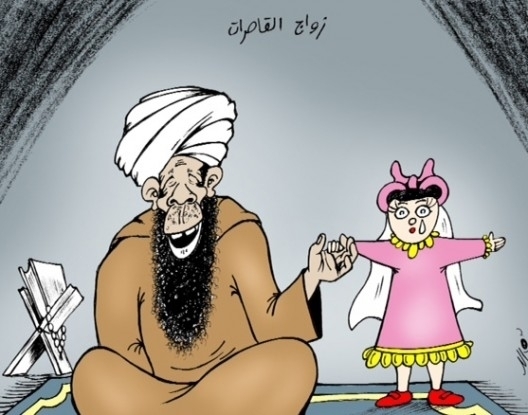 It’s now known to all Syrians, especially those in areas controlled by ISIS, that wherever ISIS goes, life is turned upside down. ISIS members tend to change common customs to suit their ideology, which is rejected by the Syrian society.

Child marriage is a phenomenon spreading widely in the Deir-ez-Zor areas controlled by ISIS. Moutaz Alsaleh, a reporter there for alsouria.net, said that ISIS preachers are promoting child marriages and forcing underage [ISIS] members to get married. He said that they used religion to convince people about the practices.

Alsaleh reported that “in spite of their tribal nature and tribal fanaticism, the people of Deir-ez-Zor, whether remaining there or having left, mentioned that only a few cases [of child marriage] like this had happened [prior to ISIS’ presence there].”

Mohammed, a former FSA member who is now living in Deir-ez-Zor, said “ISIS was pushing their underage members to get married. There were many cases in Deir-ez-Zor where 15-year-old members got married, which was unprecedented even prior to the revolution.”

Mohammed added that, “ISIS facilitates child marriage by giving those who want to get married confiscated houses and furniture, in addition to $1,200 as a marriage loan.”

Mohammed pointed out the preferences practiced by ISIS. Former FSA members who had sworn allegiance to ISIS and were over 25 years old didn't receive this loan, even though many had applied to get it, while 15-year-old members and emigrants’ children received it.”

Our reporter pointed out that some families forced their underage girls to get married either out of ignorance or out of poverty. Sometimes they forced their underage girls to marry “emigrants” [foreigners who had come to Syria to fight with ISIS] in order to have some influence and authority, especially if the emigrant was an influential [ISIS] member.

Ahmed, a citizen from Deir-ez-Zor, discussed the religious justifications used by ISIS to promote child marriage, telling alsouria.net that, “even though it was true that the Prophet Mohammed married Aisha while she was nine years old, this was because girls in that area had different body structures. In Africa and even in Saudi Arabia you would hear that 10 or 12 year-old-girls got married. We used to hear such a thing 50 and 60 years ago, but that was then, and today’s girls’ structure have changed.”

Ahmed said “they forced their girls to marry emigrants, but how could the girl’s father know the truth about this emigrant? How could he find out if he was decent? Not to mention that these emigrants are not content with one woman, but tend to marry two or three women. Have these emigrants come to liberate this land or to stay and get married?”

Moutaz Alsaleh, our reporter, found that the number of divorce cases were increasing in the areas controlled by ISIS. This was due to the young age of both the husbands and wives—mostly 15 or younger—which made it difficult for them to stay married. He also said the “Islamic court established by ISIS has witnessed dozens of divorce cases, mostly underage girls forced into marriage who are seeking divorce.”

One woman from Deir-ez-Zor, who preferred to remain anonymous, told alsouria.net that, “there was a clear reason for these numerous divorces.” She asked, “how could a mother throw her own daughter to these monsters? If 20-year-old girls can’t really hold marital responsibilities, then what about children who are forced into these marriages?”

The woman added that, “one of these wives was a seventh grade student last year. Before these people came, she used to play with my daughter, and now she is a divorcee! We now hear about 15-year-old divorcees and 14-year-old widows.”

Humanitarian organizations accuse ISIS of child abuse, including of recruiting children to fight and of sending them to military camps to train them to use arms.