Like most other Syrian camps in Lebanon, the camp was built quickly with no attention paid to general safety measures 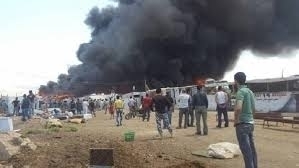 “The fire burned everything we had. Refugees suffocated, and some of them died. The fire deprived them of the little privacy and shelter provided by the tents, which were turned to ashes. With everything that is happening, it seems that any of sense of security or settlement, outside Syria as well as inside, will remain a dream that may not come true, a lie we hopelessly try to believe.

Yazan used these words to express his sorrow for the large fire that broke out in the Aljarahia Syrian refugee camp in the Bekaa, Lebanon. A few days earlier a similar fire had broken out in the same area, burning other tents and injuring many refugees. According to activists, a cooker inside one of the tents burned while a “tent wife” was cooking. The fire burned the tent and injured many family members. It spread quickly due to the flammable materials used to make these tents, like wood and nylon. According to witnesses, the incident caused the death of six Syrians—including children, a woman, and two men—and the suffocation of four refugees. Over 92 of the 120 tents burned down completely.

Many might wonder how a small incident like this caused such damage and injuries, when it might have been so easy to save all those people and put out the fire. Jalal Eddin, an activist from the camp, described Aljarahia Camp as primitive and neglected. He said that the negligence of the Lebanese authorities—both the municipality of the town of Almarj and the Lebanese civil defense who ignored the calls of the people and did not send ambulances or fire trucks quickly—was the reason behind what had happened. The fire broke out at 12:30 in the afternoon, but the ambulances and fire trucks came two hours later, at 2:30 p.m. And they kept working until 5 p.m. that evening, which gave the fire a long time to spread widely and burn over 90 percent of the camp.

Aljarahia camp is in the Almarj region in the Lebanese Bekaa Valley, and it is registered with the UNHCR as an official [refugee] camp. But Aljarahia is not in compliance with international standards and conditions, according to Jalal-Eddin. Like most other Syrian camps in Lebanon, the camp was built quickly with no attention paid to general safety measures. Flammable materials were used, and public facilities like toilets, baths, kitchens, and so on that should meet the essential needs of the residents were disregarded. The tents consist mainly of one room made of flammable plastic and supported by wooden pillars. These one-room tents are used as a kitchen, living room, bedroom, and bathroom all at the same time.

The people of Aljarahia Camp have suffered many difficulties in terms of the simple provision of food, water, and medical help. These people were already quite poor before the fire. As Yazan said, “This is not a normal life.”

Other residents said that the camp, which is partially sponsored by many international organizations, was facing catastrophic circumstances and was neglected by organizations including UNHCR, the Almarj municipality, and Syrian institutions. It contained 120 tents and over 1,500 refugees who lack all the necessities of life. There is no plumbing, public facilities, or clean water, and sewage is visible to the naked eye. It is cleaned monthly by one of the sponsoring organizations. The [lack of] sanitation allows insects, rats, diseases, and foul odors to spread, and puts the refugees at risk of being attacked by animals and snakes in the area.

Because of the fire, the residents lost all of their belonging, documents, clothes and tools, along with their shelter. This caused a humanitarian and social problem, which some parties tried to solve. A number of representatives of the Lebanese Ministry of Social Affairs and Ministry of Labor, Almarj Municipality, UNHCR, the Norwegian and Danish Refugee Councils, and a group of Syrian associations and activists met together and decided to rebuild the camp as it was before, using the same materials. The camp residents and activists criticized the decision—the previous camp had lacked the necessities of life, and [the recent decision] failed to take into consideration the health and humanitarian conditions. Temporary canvases were built as a quick solution to shelter the people who lost everything and were left to sleep on the floor.

Jalal-Eddin, the activist, wondered about the role of the Syrian Coalition institutions when it comes to the refugees and their needs. He asked about the role of the [Coalition’s] Support Unit, located only 3 km from where the fire took place. “If Fadi al-Halabi, the representative of the Support Unit in Lebanon, had only looked out of his office window, he would have seen the flames burning the whole camp and killing those inside. Yet the institution paid no attention to the incident. None of them paid a visit to the site of the fire to inquire about the camp residents or to try to help,” he said.

Jalal-Eddin continued, “Other incidents have occurred in the Syrian camps in Lebanon, others disasters refugees have to suffer. The most recent fire broke out last week because of a short circuit. The Lebanese authorities issued a formal decision to evacuate a number of camps including Aljarahia 2, where 42 families were forced to leave, and 22 families where forced to evacuate the Anjar Valley camp. They were not moved to other camps, and were given only a few days to evacuate, which was not enough time to find another place to live.” Concluding, he said, “We try to form a new memory, but we always end up losing everything—our clothes, our photos, our pillows, our books, and everything else”.