The women of Douma who were tutors and housekeepers became widows, door-to-door peddlers and informants 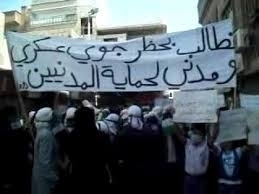 The women in the eastern area of Ghouta – especially those in the city of Douma – became the only surviving parents of their children. Some of those leeching on and trying to take over the Syrian revolution have harvested the fruits that they did not seed while stealing the rights of those women whose husbands died defending the revolution of freedom and dignity.

“News about a woman’s self-immolation spread fast in Douma, and there are rumors that she killed herself after selling her body to a man of power and wealth,” said Thaer who works at a grocery store in Douma’s grand market known as the “Sheep Square”.

The Islamic religious police located near the Grand Mosque of Douma, which is known in the city as “Al-Hasaba Office”, is a group of men whose sole job is to spy on people, uncover their religious orientation and past mistakes, according to Raed who owns an apparel shop. “I owned a small shop that sold women’s clothes after my brother, who works in Dubai, sent me some money. Of course, my customers were rich women – noveau riche – who are married to merchants who call themselves “sheikhs” but are not actually clerics, judges or notables. The men that these women are married to are just thieves,” Raed said.

He continued: “One day, a young man visited the shop with a beautiful young girl who looked no more than 18 years old. He told me that the girl needed a full-time or a part-time job and kept begging me, so I agreed to hire her on a part-time basis. A couple of days after the girl started her work at my shop, an old friend of mine who knows people at the Al-Hasaba Office visited me to let me know that the girl and a friend of hers actually work for the office. He warned that the office was using the girl to spy on me and my acquaintances, and that she was going to set me up.” Raed was infuriated and dismissed the girl, but he was shocked when an employee at Al-Hasaba Office called him and forced him to sign a pledge to change the shop display with naked mannequins. The office also forbade him from selling wedding dresses because they allegedly imitated the Western tradition.

Thus, the women of Douma who were tutors and housekeepers became widows, door-to-door peddlers and informants. Umm Shadi, a 45-year-old woman whose husband was killed in a chemical massacre that claimed over 1,000 lives, leaves her house early in the morning and rides her carriage to the grand market in the center of Douma. “As you can see, I come here every day to sell bakery products. I prepare and bake them at home at night and sell them here in the morning. I have three children to support.” When asked if she receives financial aid as a martyr’s wife, she proudly answered: “A town elder offered me money for cleaning his house but I refused, saying that I am not his servant.”

On the first morning of Eid Al-Fitr, the people of Douma performed their prayer but there was no joy whatsoever; a familiar kind of incident had just caused havoc at one of the mosques in the city. The news travelled fast: someone had stolen a new pair of shoes that belonged to a child of an officer of a local faction, most likely the “Al-Islam Brigade”. “No one knows how the perpetrator was captured within 10 days. To our surprise, it was a woman named Umm Ismail,” Thaer said. Umm Ismail was a hapless woman who begged for money, and a mother of three. As soon as they discovered that she was the one who had stolen the said shoes to give them to her 14-year-old son, she was arrested and jailed for over a month. Is it even possible to imprison a woman for over a month just because she stole a pair of shoes for her child on the first day of Eid Al-Fitr, while many corrupt officials who wear down the people in the name of religion and the revolution are roaming free?” asked Thaer.