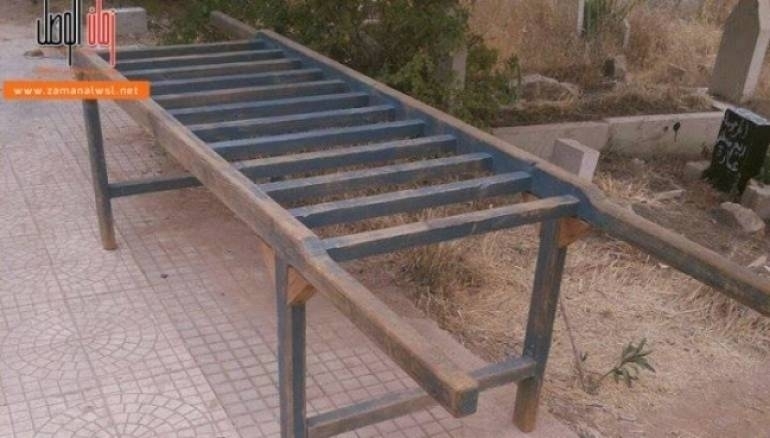 Syrian refugees in the Lebanese border town of Arsal do not have anything left except memories of their life back in Syria. They cannot afford to treat their guests with a cup of coffee, or even give the deceased a dignified burial and funeral, according to Sheikh Izz Eddin Hammoud, a Muslim cleric who is a refugee himself.

Syrians at refugee camps in Lebanon regularly requests Sheikh Izz Eddin’s assistance as they look for shrouds to cover the deceased, in addition to other materials for burial including headstones and cement. Sheikh Izz Eddin said that he has tried to provide the shrouds they need by using his extensive relations with a number of generous Lebanese in Arsal.

According to the sheikh, a shroud costs $18 for men and $23 for women, while digging a grave costs nearly $60; he told Zaman Al-Wasl that he once managed to secure eight coffins by himself without receiving any support, and that he recorded this in his register.

Some may be surprised to learn that refugees find it difficult to afford a coffin; however, a young Syrian man named Ahmed who participated in a funeral said that the U.N. pays $65 to a family of five every month. That is a paltry $13 per person for a month – this is why a whole family’s monthly income may not suffice for a burial.

With regard to burials and funerals, Abdo Abu Khalid explained that they begin with washing the deceased and placing him or her in the coffin. Then, relatives gather around the deceased before taking the body to a nearby graveyard – which is usually 3 to 6 kilometers away – on an agricultural vehicle. The body is then buried using primitive tools and hard labor.

According to Abdo, mourning ceremony takes place inside a small tent after funeral prayer and burial; at most funerals, however, simple amenities such as chairs or even cups of coffee are no longer offered and the token of hospitality is usually limited to tea, if there is any. Abdo explained that the tradition of distributing food and meat as a gift honoring the soul of the deceased has been discontinued. It may no longer be possible even to pay homage to the dead in the graveyard because of the distance and lack of transportation.

Abdo stated that some young Syrian men manage Facebook pages that people use to announce the death of a person, accept condolences, post photos of the deceased and publish the details about the circumstances of his or her death.