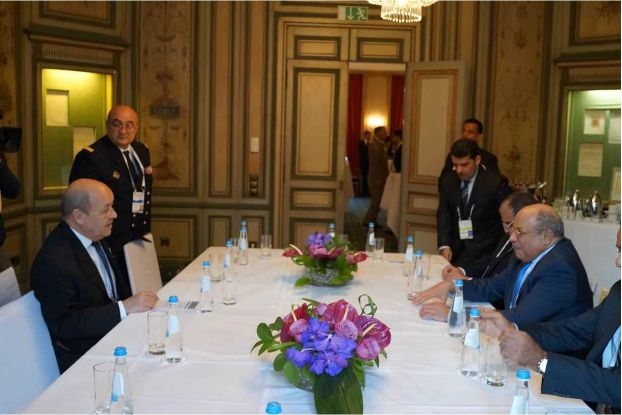 The international Munich Security Conference witnessed an exchange of heated, indeed sometimes exasperated, words between senior representatives of participating countries, provoked by Russian Prime Minister Dmitry Medvedev’s speech, initiated by hurling accusations against others and sending warning signals to more than one nation and party.

After expressing his impression that a “new Cold War” is being waged against his country, and speaking about “soured relations with the European Union,” he then turned his focus to the Syrian crisis, saying: “We must preserve Syria as a union state and prevent its dissolution for denominational reasons … The consequences of this scenario would be catastrophic for the Middle East.” Medvedev criticized Saudi Arabia’s announcement it was prepared to send ground forces to Syria, saying, “There is no need to impend anyone with a land military operation.”

While considering “the Syrian President Bashar al-Assad a guarantee for peace”, the Russian prime minister held the West responsible for the slide to war in Syria because of its decision to interfere, transforming the conflict into a civil war, while denying it was bombing Syrian civilians.

US Secretary of State John Kerry responded to Medvedev in his speech, saying: “while the Cold War is long over, the need for the same qualities that brought people through that – for the courage and the resolve in defending liberty and in pursuing peace is absolutely as vital today as it was half a century ago.” Kerry urged Moscow to reconsider its military strategy in Syria, saying that “the vast majority, in our opinion, of Russia’s attacks have been against legitimate opposition groups.”

Kerry said that Russia should focus on other targets to give space for an actual implementation of the new cessation of hostilities agreement. He addressed Medvedev, saying: “This is the moment. This is a hinge point. Decisions made in the coming days and weeks and few months could end the war in Syria – or it could define a very difficult set of choices for the future.”

UK Foreign Secretary Philip Hammond echoed his American counterpart’s statements, saying that violent extremism increases in the absence of hope. Hammond said the Islamic State group was a “modern fashionable manifestation of violent extremism”, indicating that it is not easy to get rid of the fundamentalism that stands behind it, but that “Islamic countries should lead this fight themselves.”

Saudi Arabian Foreign Minister Adel al-Jubeir told the German newspaper Suddeutsche Zeitung that Syrian President Bashar Assad “will not rule Syria in the future, and the Russian military intervention will not help him stay in power.” He said: “There will be no Bashar al-Assad in the future … It might take three months, it might take six months or three years – but he will no longer carry responsibility for Syria. Period."

Jubeir criticized Russian participation in the five-year-long war, saying that the Syrian people's determination to topple Assad was unbroken despite heavy Russian air strikes and persecution within the country. He said Assad’s invitation to Iran, Hezbollah, and Shiite militias from Iraq and Pakistan to help his forces had not helped him, adding: "Now he called the Russians, but they won't be able to help him either.”

On the possibility of Saudi ground troops in Syria, Jubeir said that such debates were ongoing between member nations of the US-led against ISIS, indicating that if the coalition decided to deploy special forces in the fight against the group in Syria, then Saudi would be ready to join.