Aleppo remains the most destroyed and devastated, representing 58% of the ruined surfaces in Syria due to the regime’s heavy bombing, with explosive barrels and Russian missiles 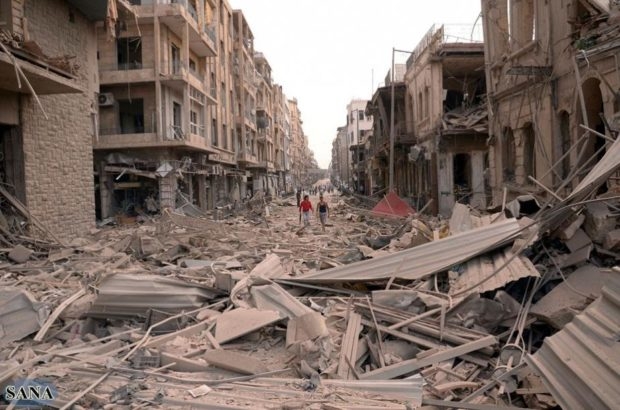 Pictures captured by drones show massive devastation in Aleppo, the economic capital of Syria and its second largest city. Same as in Homs and Jobar in Damascus, the pictures of these three cities reveal the painful scene of Syria caused by war and by five years of aggressive bombing that destroyed vital facilities, population blocs, and infrastructure worth $300 billion.

Yet Aleppo remains the most destroyed and devastated, representing 58% of the ruined surfaces in Syria due to the regime’s heavy bombing with explosive barrels since 2013, and later Russian missiles.

This breach of control was a direct excuse to bomb neighborhoods on a daily basis with batteries before later targeting them with explosive barrels, known for their random and non-directed falls.

According to opposition supporters, the regime used barrels for the first time in 2013 to bomb the eastern neighborhoods of Aleppo, which left behind huge destruction and paralyzed many regions. The opposition used the same tactic, and bombed tunnels under buildings where regime forces reside on the demarcation lines with the historical neighborhoods.

The bombings caused by both parties led to the massive destruction of infrastructure and residential complexes.

An opposition military source said the tunnel bombings were the best response to the regime’s aggressive bombing, and that when the regime forces sensed their inability to retrieve opposition neighborhoods, they adopted the policy of inclusive destruction to prevent civilians from reaching secure refuges through bombing them, aiming to weaken the popular support for the opposition. The same source confirms that the bombing and systematic destruction in the area didn’t urge the inhabitants to leave, and the wide geographical surfaces helped protect the city from blockades, noting that losing control over it’s second largest city was the regime’s strongest proof of its own failure and weakness.

Battles in the inner side of Aleppo’s neighborhoods subsided at of the beginning of 2014 with the regime’s forces withdrawing from the majority of them, and so did the direct clashes in the city, which burned the biggest historical markets, the old neighborhoods, and the Great Mosque of Aleppo, which also calmed with the appearance of demarcation lines. Later, the neighborhoods suffered from aerial bombardment that compensated the regime’s failure in launching direct battles.

The above-mentioned clarifies the reasons behind the massive destruction that Aleppo faced in its population blocks and infrastructure, much more than other regions in Syria. Dr. Osama Kadi, head of “Syria’s Economic Working Group” told Asharq Al-Awsat that Aleppo enjoys a remarkable commercial, industrial, and logistic weight, and that the spread of the Free Syrian Army, and its control of large parts of the city was considered a significant threat for the regime. He adds that when the regime forces failed in kicking the Free Syrian Army out of Aleppo, it demanded the help of the Russians, Iranians, and the supportive militias to retrieve the city.

Kadi notes that the regime and the Russians used the mightiest weapons in this city that shall leave marks on people and the environment even after the termination of this crisis. He continues that the last study by the World Bank showed that Aleppo’s share of the damages reached 58.10% among other Syrian cities.

Devastation of the industrial cities

Along with the architectural sector and the infrastructure, Kadi points that Aleppo is a pure industrial area, including around 38,000 industrial establishments, and that many of the industrial zones suffered from incidents of burning, stealing, and destruction. He estimates that the damage has cost the city 60% of its manufacturing capacity, which used to produce more than $5 billion annually.

Dr. Kadi adds that Aleppo’s bombing reached many historical neighborhoods with 100 year-old architectures and damaged the Great Mosque, built in 715 AD, and the historical markets of the city established in the 14th century.

The destruction also dominated other regions in Syria including Homs, Damascus in Jobar and Daraya.

Kadi points out that the primary estimations of losses across Syria exceed $300 billion, while the reconstruction of the country, the rehabilitation of the damaged industries, and the revival of the economic cycle might require double this sum, and more than five years. He adds that the caretaker government needs innovative ideas, national funding alternatives, and partnerships with specialized Arabian companies to avoid Syria from sinking into debts, following this disastrous destruction that overtook Germany’s destruction during the Second World War II, as Bashar al-Assad admitted in his latest speech.

Osama Kadi explains that the sectors of housing, education, and health were the most affected by devastation during the last five years, as air strikes and explosive barrels have targeted the residential neighborhoods, which displaced 12 million civilians, where 5 million of them fled the country. He adds that the agricultural sector was also remarkably affected and that the labor forces have left out of fear of the unstable security.

The “Syria Information and Research Initiative (SIRI)” of the World Bank has prepared a scheme showcasing the destruction that attacked the main cities in Syria, the damaged sites, and the facilities that still operate, or stopped.

Official in the World Bank said that the agency is using the newest technologies and maintaining readiness to kick off the reconstruction projects in Syria, once the conflict’s severity declines.

However, planning isn’t sufficient anymore, as the deterioration in Syria is raising many question marks over how to cope with the facts on ground and to set a reconstruction strategy.