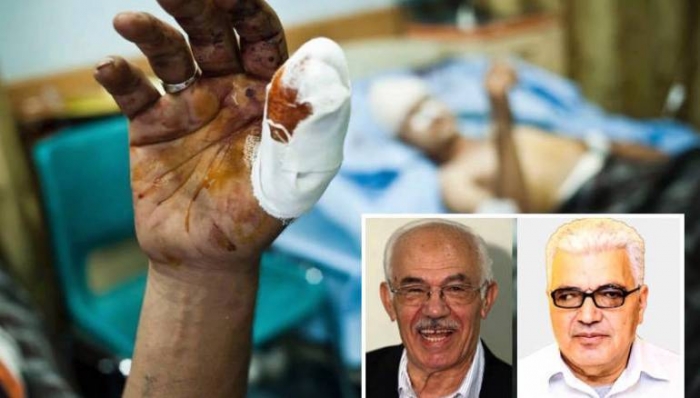 Days after Hasan Abdel Azim’s comments that any transitional stage would require President Assad to stay in power, National Coordination Committee (NCC) member John Nasta met with the deputy Syrian National Coalition chairman, Mouaffaq Nyrabia, to raise the level of coordination and understanding between the Committee and the Syrian Democratic Forum opposition party (an active body inside the Coalition).

According to sources, the meeting focused on forming a joint high committee that balances the size of the opposition High Negotiations Committee (HNC) in Geneva, as both groups believe the role of the HNC has become political under the leadership of Riyad Hijab, a figure with much popular support among Syrians, and as such are searching for a political entity to stop him.

Thus, the opposition figures saw it as necessary to form a solid political front that works to modify this committee, increase its members, expand the circle of negotiators for both sides to play a deep role, and define the committee’s authority.

Despite the divisions among opposition figures following Abdel Azim’s statement to Zaman al-Wasl that President Assad leaving before the transitional phase is an “impossible condition,” signs of an understanding have emerged between the NCC and the Democratic Forum.

The meeting’s main surprise was when Nyrabia voiced his approval with Abdel Azim stating, “I agree with you that Assad remaining in the transitional phase is realistic and logical,” but announced publicly the process may be taken advantage of by hawks amongst the Coalition and the HNC to attack the Democratic Forum and the NCC, thus Nyrabia declared it disadvantageous to announce his position at this time.

Preparations for the Transitional Phase and Confronting the Muslim Brotherhood

Information obtained by Zaman al-Wasl indicates that the alignment of the Democratic Forum and the NCC on the necessity of Assad remaining during the transitional phase relies on both parties wanting to play a part in this period based on their self-perceived role as a balanced and effective front within the Syrian opposition. This enables them to enter parliamentary elections (in the event of their occurrence), and justifies their presence in the transitional phase with the need to face the Islamist forces, especially the Muslim Brotherhood, and scaling back the role of the regime’s remnants.

Before such a scene, there must be a clear vision for this phase and mechanisms to deal with it, and perhaps the repeated subsequent visits between the sides in Brussels lead by the Democratic Forum is part of this strategy.

Where are the Hawks and the Military?

The answer to the most pressing question in this ongoing debate must be reached at the level of the Coalition’s general secretariat, and since the Coalition suffers from a state of isolated alliances, then it is necessary to direct these groupings away from the Muslim Brotherhood to the representative of the Local Coordination Committees, representatives of the military forces, as well as other members. Regarding Nyrabia’s comments labelling certain individuals as hawks, has the Coalition gone from representing Syria’s revolutionary forces to being warmongers and peacemakers, and what about the stance of Coalition President Anas al-Abdah? It is correct that the military forces are busy on the fighting fronts, but it is the side most concerned with these details as it is blood that moves the pawns on the chessboard, and is the first and last side concerned with political attractions within the opposition forces.

In the event a new direction of the Democratic Forum and the NCC is announced, there will be widespread regional ripples especially from the Gulf states, namely Qatar and Saudi Arabia, as Saudi Foreign Minister Adel al-Jubeir is resolute on Assad stepping down from the first day of the transitional phase.

These two Syrian opposition forces are ceding to the Iranian-Russian vision, which sees Assad as a crucial part of the transitional phase, as well as dealing a strong blow to the Riyadh conference which determined Assad would not be present during this process. As such this direction will cause a struggle or confrontation with Saudi Arabia, which sponsored the Riyadh conference. Are the Democratic Forum and the NCC ready for such a confrontation with one of the countries most entrenched in the Syrian affair?

As the Democratic Forum and NCC are not the main players in the Syrian conflict, it is likely decisions of this nature will not rest in their hands.

If their direction is based on a national need, they why don’t they publically announce this project to all Syrians? If they are working for Syria, and if we can assume their intentions are good, then let them come before the Syrian people and all the other political forces, away from the back-channeling and private corridors.