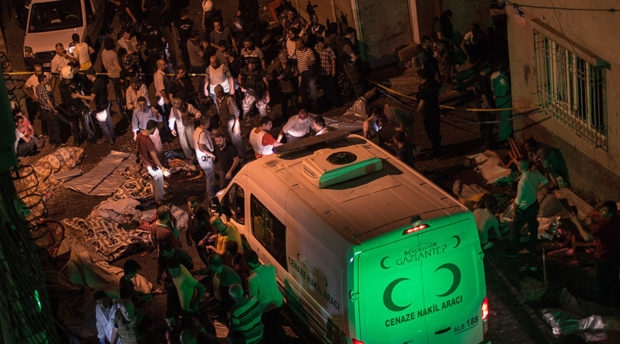 Gaziantep is known as the ISIS stronghold due to its proximity to the Syrian border and easy access.

The city in southern Turkey witnessed another suicide attack on Saturday that left 51 civilians dead and many others injured.

According to the public prosecution’s 500-page brief, ISIS had a plan to overtake the city. This was revealed in a letter sent by the ISIS chief in the city, Yunus Durmaz, to the ISIS leader in Turkey after the latter’s directives to attack several areas in the country.

According to the indictment, Durmaz suggested to secrecy regarding ISIS activity and recruitments in Gaziantep. He said: “Currently, there are many jobs occupied by Arabs only in Gaziantep. There are around 50 men who work as shoemakers. A Turkish man will rent a two-story place and turn it into workplace. He will only hire Arabs. That way we can hide our friends. If we open five similar places we can do our operations,” said Durmaz.

He also suggested using Arab housings to hide ISIS members: “There are buildings used by Arabs only and we can put our friends in them for a yearly rent. For example, I live in a building with Arabs. There are 38 apartments in the building, and in each apartment there are least four persons. This means we can hide at least 110 people.”

The Turkish army publishes a weekly newsletter about the number of ISIS members captured in different cities. Gaziantep is the city with the largest number of ISIS militants arrested.

Also, terrorist Orhan Gonder, who is responsible for the attack on the rally of the Kurdish Peoples’ Democratic Party (HDP) in Turkey’s southeastern province of Diyarbakir two days before Turkey’s June 7 general elections, was captured in Gaziantep.

Security reports reveal that fighters who belong to ISIS or are sympathizers with the organization arrive at Gaziantep and hide in ISIS homes. Then, they move to Syrian territories.

The reports explained that ISIS had transformed the city into a logistics hub to support its basic needs and manpower.

It is believed that due to the defeats at the borders, ISIS members had to retreat and hide in Gaziantep and Kilis.

Turkish Opposition MP Eren Erdem of the Republican People’s Party (CHP) stated on Sunday that there are around 200 ISIS cells within Turkey. He added that there are active cells in Istanbul.

Erdem said that it is enough to check the manifest of passengers between Istanbul and Gaziantep since 2013 to understand the gravity of the situation.

The MP said that at least 20% of the passengers belong to ISIS, with over 600 passengers entering Gaziantep this way.

Erdem explained that after reading ISIS reports and testimonies it became clear the ISIS militias first arrive in Istanbul and stay in guesthouses. He said that they even used the guesthouse of the Committee of Religious Affairs. He added that it isn’t clear whether the committee was aware of the situation or not. He said that police residences were even used for the same purpose.

He went on to say that ISIS militias would then transfer to Gaziantep for theoretical and not arms training. They receive training on how to use weapons and bombs as soon as they arrive to Raqqa.

Erdem claimed that the security forces and Turkish Intelligence are aware of this information but did nothing.