Syrian army facilitating the looting of the Damascus suburb after Shiite militias enter the city following their victory against opposition forces, sources claim 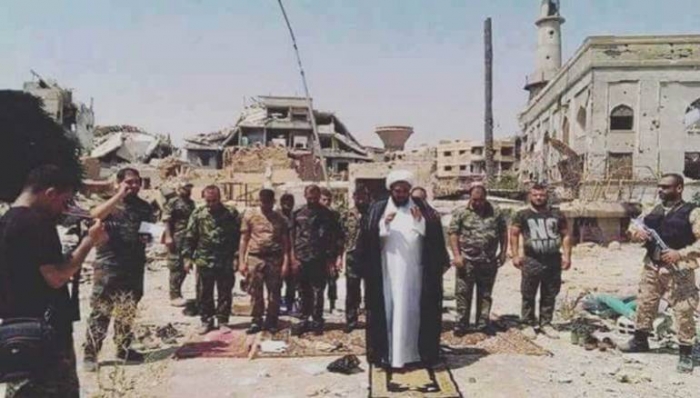 No sooner was Daraya evacuated and its last residents had left their city than various regime militias entered to record “victory” and take souvenir photos. The visit of General Secretary of the Liwa al-Imam al-Hussein Shiite Iraqi group, Amjad al-Bahadli, known as Abou Karar, to inspect the purported Sayyida Sakina shrine and pray in the rubble, was no more than a message about the identity of the new rulers in the region.

The city was opened to all those who wanted to steal, while the markets of Sahnaya and Mezza 86 and the area of Dowlea’a and al-Kebas were quickly filled with looted furnishings, presented for sale at the lowest prices. This provoked anger even among loyalist journalists, who photographed the looting and the markets where the goods were sold, calling for the perpetrators to be held to account and for an end to the raiding “which offends the souls of those who died to liberate Daraya,” as one journalist put it.

Despite the capture and looting of the city, the Syrian army’s elite Fourth Division prevented anything from being taken out. The Fourth Division, which is led by Maher al-Assad, has become the overseer of the entrances to the city, and has been selling the metal and debris exclusively to dealers of the regime businessman Mohamed Hamshou, who “will contribute” to “rebuilding the region,” according to sources speaking to Al-Modon.

The Fourth Division also prevented previously displaced people, who had been residing in regime-controlled areas, from returning to their homes. There were scuffles between fighters from the Fourth Division and others loyal to the Air Force Intelligence and Military Security after an attempt of civilians to enter their homes in exchange for money. The fights developed into armed clashes, until the issue was resolved by the leadership of the Fourth Division.

One of the displaced from Daraya was permitted to enter his home and the homes of his neighbors after negotiating with a Fourth Division fighter and paying a bribe of 50,000 Syrian pounds. He told Al-Modon details of his visit to the devastated city. The visit lasted two hours, which was enough to observe the deliberate destruction. The forces responsible for combing Daraya, part of the Syrian Republican Guard, destroyed furniture which the militias were unable to loot. The displaced man described the destruction of his home, which extended to the doors and windows, and the furniture which was destroyed after it could not be carried — even the tiles on the floor were pulled up and broken.

Al-Modon’s sources said that a number of loyalist militia fighters who entered the city were killed by landmines which the opposition had planted during the battles before they pulled out. A car transporting stolen furniture was overturned and two regime forces inside were killed after a landmine exploded. Three fighters were killed on one of the agricultural roads by a landmine as well. In Sahnaya a bomb which was planted in a refrigerator looted by militias exploded, killing two people.

Al-Modon’s sources said that a captain from the Fourth Division known as “Erwa," who is close to Maher al-Assad, had become the top official for Daraya’s security and its entrances, because of his track record in looting Al-Maleeha and the towns of the southern Damascus countryside. Erwa coordinates with traders who carry metal and debris from the city, with cars confiscated on the Sahnaya-Damascus road arbitrarily, to carry out transport operations to assembly areas, to recycle the metal and debris in special factories which produce building material.