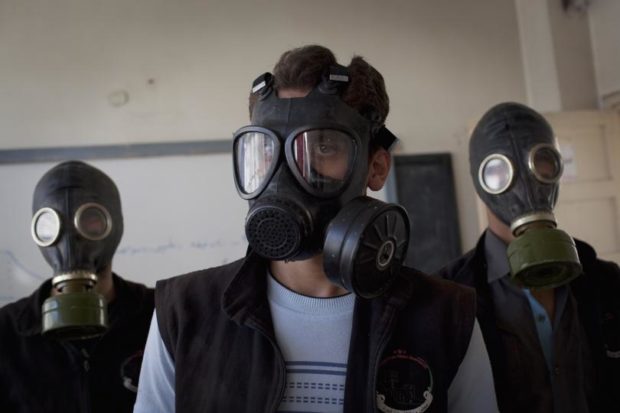 The Syrian opposition has expressed fears that Russia’s plan for a large-scale offensive on the city of Aleppo has neared its launching date under the excuse that rebels are using chemical weapons in areas that fall under the regime’s control.

Meanwhile, the executive body of the global chemical weapons watchdog voted on Friday to condemn the use of banned toxic agents by the Syrian regime and ISIS, a source who took part in the closed session said.

Roughly two-thirds of the 41 members on the Executive Council of the Organization for the Prohibition of Chemical Weapons (OPCW), endorsed a text compiled by Spain, sources told Reuters.

An initial U.S. draft was replaced with a compromise text drafted by Spain, which dropped a reference to sanctions against those responsible for violations of the Chemical Weapons Convention, sources added.

The Russian military claimed Friday it has evidence of the use of chemical weapons by rebels in Aleppo.

“Experts from the Russian defense ministry have found unexploded artillery ammunition belonging to terrorists which contains toxic substances,” the military said in a statement.

“After rapid analysis in a mobile laboratory, we have determined that the toxic substances in the rebels’ ammunition are highly likely to be chlorine gas and white phosphorous.”

The ammunition was discovered in the 1070 district on the southwestern outskirts of Aleppo, the statement said.

Russian Major-General Igor Konashenkov said Moscow would now hand over the evidence to the OPCW and wanted the Hague-based body to urgently send a team to Aleppo to gather its own evidence.

The Syrian Coalition denied the Russian allegations, saying the only weapons the Free Syrian Army and rebel groups “use in battles against regime forces and their allied foreign sectarian militias in Aleppo are light and anti-tank weapons.”

“The munitions referred to in the Russian allegations are used exclusively by the Assad regime,” it said in a statement.

“They come as part of false claims made by Moscow to launch a large operation in Aleppo,” he said.

“If that had not been the case, then why did Russia send its aircraft carrier to our territorial waters accompanied by frigates?” al-Maleh asked.