The past 12 months has seen the killing of over 50 journalists by different parties to the conflict, but the activity of prominent institutions provides a glimmer of hope for journalism's future in conflict-ridden Syria 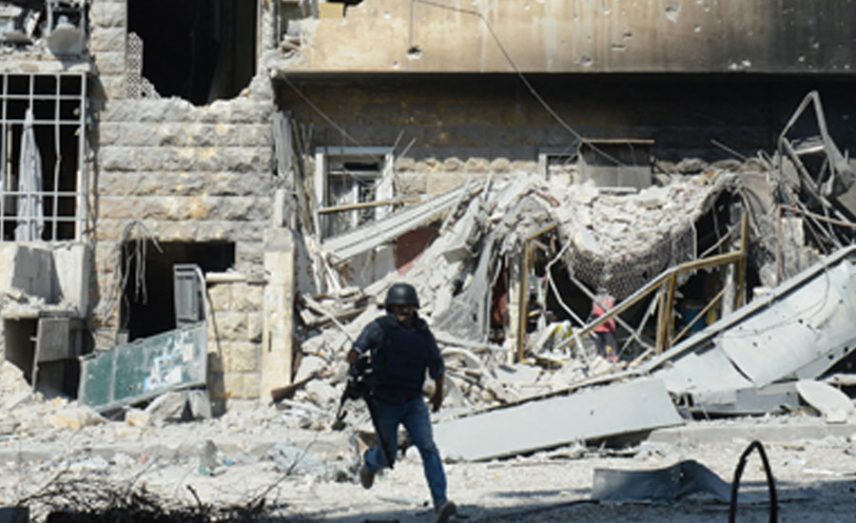 Journalists had a strong presence in 2016 — like all other years of war in Syria — through documenting all events in different conditions, but they were also one of the victims of this war, as reporters were subjected to a range of abuses, from bombardment to arrest. According to the Syrian Center for Press Freedoms, at least 52 journalists died in Syria during 2016.

The regime forces were the main cause of journalist deaths, killing 27 journalists during 2016, while their Russian ally killed six journalists, the Islamic State group killed 14 journalists, and the Western-backed Syrian Democratic Forces killed one. Rebel groups also killed one, and three journalists were killed by unknown parties.

The center documented 41 cases of arrest, kidnapping and detention and 59 cases of journalists being wounded, in addition to 19 violations media institutions were subjected to.

Last year witnessed the emergence of a number of media institutions, most recently the formation of the opposition media union in mid-November, as the first civil institutional action to unite all journalists in Homs city and its countryside within a single body. This was within the framework of the administration council composed of a president and four members. More than 60 journalists signed its charter and the journalist in the Homs countryside, Yaarib al-Dali, told Souriatna that with the union, journalists had “united media campaigns, defined media policy, and unified the news through focusing on a specific issue, whether the humanitarian crisis, as with the crises occurring now in the city of Rastan, most prominently the bread crisis, or the military crisis in the besieged Waer district.”

The union aims to create a body to defend journalists in Homs against kidnapping or threats from all parties to the conflict, or, if there are disputes with one of the groups or a specific party, the media union will work to resolve the disagreements and protect journalists.

Two units for investigative journalism were meanwhile launched in Syria, as the Enab Baladi media organization on November 1 launched an investigative unit in the framework of a plan developed by the group in May 2016, which includes strengthening the in-depth journalism sections they have through five training workshops which will continue until the end of this year.

A group of Syrian investigative journalists also announced the launch of a unit with the aim of producing investigative reports, as well, SIRAJ (Syrian Investigative Reporting for Accountability Journalism), which teaches journalists on how to prepare these investigations through training workshops.

There is no doubt that Syrian journalists’ contributions over the past years has been necessary and that they have managed to deliver a real image of events on the ground to world public opinion, while also being subjected to a number of horrors. The head of the Syrian Center for Press Freedoms, Ibrahim Hussein, told Souriatna that “If not for the role of the journalists on the ground and the importance of what they did, they would not have been at the forefront of the regime’s targets, and therefore we find many violations which have occurred against them by all parties which are committing crimes in different Syrian areas.”

However in contrast, Hussein said that media discourse in general “had not lived up to the level of the sacrifices of the Syrian people, and the evidence is that the opposition media has not been able to influence Arab or global public opinion, and it has not been able to address the street or the decision-making centers in countries which are influential in the Syrian issue. However, that does not mean the media bears all the blame. The political opposition also carries the biggest share of this because of their lack of awareness of the importance of media.”

Throughout the years of the war, including 2016, the regime has resorted to depending on its media for deception and to spread its agendas, and through resorting to public relations companies. Here Hussein said that the regime has “won in the media battle and managed to promote its narratives about the events far more than the opposition has. In addition, international policies and decision-making centers were to some extent with the regime and also wanted to market the regime narrative or at least did not confront its rhetoric and let it be.”

Throughout 2016 a number of journalists who had left an impression on the field of media died, most prominently the Syrian activist and photographer Khaled al-Essa, who died from his wounds sustained during an explosion which struck him with the journalist Hadi al-Abdullah in the al-Shaer district in Aleppo. Hadi’s health condition improved and he returned to doing media coverages after several months.

The irony was that Hadi and Khaled were moderately wounded during a regime air strike on Aleppo only to be hit by an explosive just two days after they were first wounded.

Among the other journalists who were killed was Ammar Bakkour, during a strike carried out by Russian aircraft on the town of al-Dana in northern Idleb.

Bakkour worked in a number of media in addition to working in the media office in the Idleb liberated health directorate. He participated in covering events by moving throughout areas of Idleb countryside.