Circumventing a formal economy that does little to lift them out of poverty, citizens have adapted to new, innovative and sometimes dangerous methods to supplement a lost livelihood in times of financial hardship, Souriatna explains 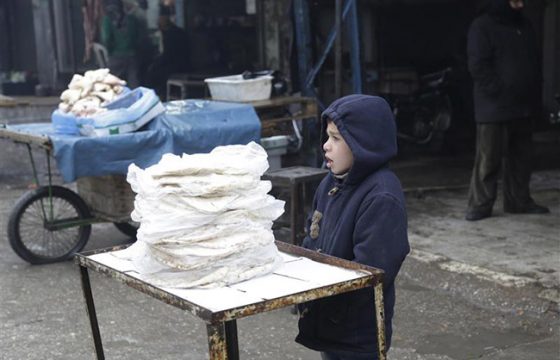 A number of new professions have appeared in Syria during the course of the six-year conflict which were previously unknown. Many residents, especially those who have fled their homes and their work, have been forced to practice unfamiliar jobs to confront difficulties and secure their livelihood.

Trade in rubble from bombardments

This profession has begun to spread in opposition areas, as it does not require large amounts of capital or a fixed location. Traders in rubble can search in buildings abandoned by their inhabitants after being struck by a warplane, where scrap metal and metal parts are targeted no matter how large the damage.

Days after the Civil Defense finishes removing the victims, the work of the scrap trader begins. “We are not thieves because my five sons and I search in buildings flattened to the ground which are uninhabitable and whose owners have all died or have left the country,” Mustafa Arnoush, a rubble trader, says.

Mustafa and other rubble traders have been able to attract customers after repairing a large part of the collected pieces. Some people agree to buy their findings since they are much cheaper than new ones. “The thing we sell most are water mixers, individual faucets, aluminum joints, and knobs for doors and windows, which have many uses in room storage and kitchen storage and some types of doors,” trader Abou Riyadh says.

In another occupation that has found popularity, with the large rise in fuel prices and its scarcity, some have resorted to using primitive means to extract fuel from petrol, particularly mazot and benzene, which are poor quality but still in demand as a result of its lower cost.

Children and elderly have begun to spread along the sides of roads selling cans full of refined fuels and for various prices depending on its quality.

This practice has spread in a large way inside regime-held areas and is practiced by children who are mostly displaced, whereby they wait in line for hours to purchase bread from the government bakeries and then sell it in front of the bakeries or on street corners to those who do not want to wait in line.

Firez, one of the residents of the Rukneddine district in Damascus says: “The Ibn al-Ameed bakeries which serve the area are always crowded, and so I was forced to buy bread from the children in front of the bakeries in exchange for paying double the price of a normal piece of bread. However, I still bought it, which is better than waiting for a long time in line.”

Smuggling people from Syria to Turkey over the border between the two countries has become a profitable profession practiced by many residents of the border areas, including young children. It has become a primary source of income for their families in which they confront heavy risks.