Opposition members and activists decry the forced relocation of thousands of civilians from the "four Syrian towns" as part of a negotiation deal to release kidnapped Qatari businessmen, Paula Istih writes for Saudi-owned Asharq Al-Awsat 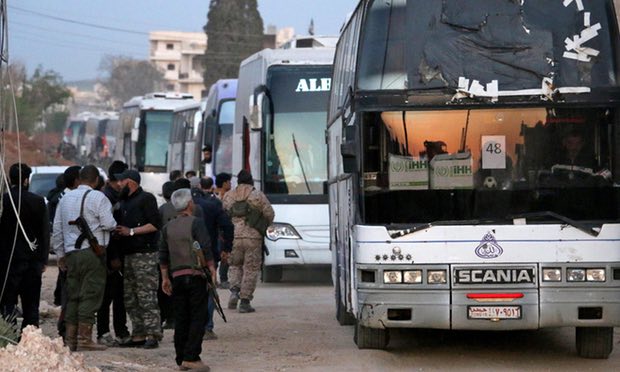 Qatar is mediating between Iran and Hay’at Tahrir al-Sham for a population swap deal in four Syrian towns in order to secure the release of Qataris kidnapped in Iraq, a Lebanese source told Asharq Al-Awsat newspaper on Wednesday.

The deal stipulated the complete evacuation of the two Shiite-majority towns of Foua and Kefraya in return for the safe passage of a similar number of civilians, fighters and their families from the Hezbollah besieged towns of Madaya and Zabadani in the west Damascus suburbs to areas in northern Syria.

On the eve of the second stage of the deal, which saw the displacement of residents from what is now known as the “four Syrian towns,” reports revealed that Qatar agreed to mediate between Tehran and Hay’at Tahrir al-Sham in order to secure the release of its abducted nationals.

The Qataris were kidnapped on Dec. 16, 2015, during a desert hunting party in the province of Muthanna in Iraq.

The Hezbollah Brigade, which is close to Lebanon’s Hezbollah, was accused of being behind the abduction.

The displacement deal, which was rejected by the Syrian opposition's political and military parties, not only includes the release of the abducted Qataris but is also used by the Nusra Front to open a communication line with Washington, via Qatar, enforcing its presence as a main political party in any future deal reached between the new U.S. administration and Moscow.

Director of the Syrian Observatory for Human Rights, Rami Abdel Rahman, said: “The deal, signed between Nusra and the Iranian side, opens the way for the militant group, through Hay’at Tahrir al-Sham, to get in touch with the Americans and to restore the group’s shaken relationship with Turkey.”

Abdel Rahman added: “Qatar has always played a mediating role in deals that included Nusra, and has secured big sums of money. Today, we are facing a new mediation for an agreement that Nusra was highly paid for.”

Syrian opposition member Samir Nashar told Asharq Al-Awsat that the Iraqi Harakat al-Nujaba (Movement of the Noble Ones) militia, of which a number of fighters are already present in Syria, agreed as part of the deal to release the kidnapped Qatari businessmen.

Another Syrian opposition source currently present in Turkey said it was extremely regretful to see thousands of Syrian residents being displaced from their towns as a price for the release of others.